Edwards finds time to pair up 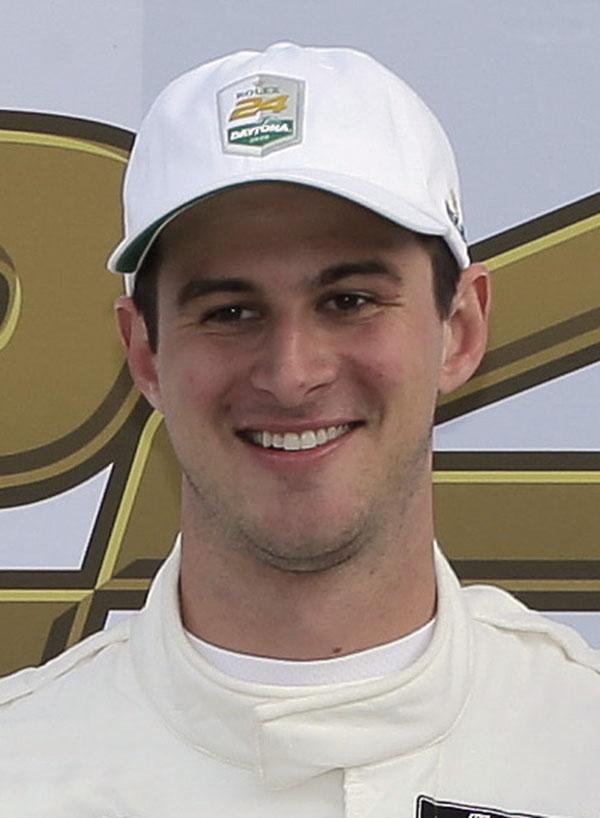 In recent months, John Edwards has made a significant upgrade to his jewelry.

In October, he picked up a ring when he and longtime girlfriend Serena were married in a ceremony at Santa Susana, Calif.

Then a couple weeks ago, Edwards, 28, took the biggest victory of his sports car racing career, helping guide his BMW team to a class victory in the Rolex 24 at Daytona International Speedway. With the victory came the traditional trophy for drivers winning the event: a Rolex watch.

One figures he wears the ring all the time, but how about that $15,000 watch?

"I believe that cars are meant to be driven and watches are meant to be worn," Edwards, a former Little Rock resident, said from his home in Charlotte, N.C. "My buddy was giving me a hard time about how often I was checking the time.

"I'll be wearing it for a few weeks, and then I'm sure I'll start setting it aside for special occasions. But right now I'm too excited about it."

Edwards and his teammates won the GTLM class at the event (covering 786 laps) in a BMW M8 GTE for the BMW America team owned by former Indy 500 winner Bobby Rahal and retired late night television icon David Letterman. He was joined in victory lane by co-drivers Jesse Krohn of Finland, Chaz Mostert of Australia and Augusto Farfus of Brazil.

In 24-hour races, consistency and durability are typically the chief benchmarks for success and tight racing for positions do not occur often. But the top GTLM competitors spent much of the race within sight of each other. The BMW's lead at the checkered flag was 14 seconds over the factory Porsche entries in second and third.

"That's the beauty of GTLM," Edwards said. "Competition is so tight, you have to execute perfectly. So even though we led for a quite a few hours, I would say the majority of the race, certainly the last half, every time I looked in my mirror, I could usually see the two Porsches or the Ferrari and a Corvette. There was nothing guaranteed at any point.

"For the final five hours, it was totally flat out, rubbing fenders with the Porsches and getting every tenth you could."

Edwards first drew attention as a racer in 2004 at age 12 while his family lived in Little Rock when he won a Skip Barber race on the small infield road course at Daytona, becoming the youngest driver to ever win a road course event in a full-sized open-wheeled car. Later that year, he won the Red Bull International Driver Search in Portugal.

In 2005, Red Bull moved Edwards and his mother to Austria to be a part of its training process it was using to find drivers for its Formula One Program. Edwards became the youngest driver, at 14, to earn an FIA racing license, and for the next two years he raced karts and Formula Renault across Europe. He returned to the U.S. at 17, earning championships in Star Mazda and Formula Atlantic before moving to sports cars full-time in 2010.

Edwards will team with Krohn for the full GTLM season with hopes for a championship.

"Jesse and I have been together for two years and didn't have victory together," Edwards said. "So now he and I can get down to business for the rest of the championship and focus on being consistent without feeling desperate like we need that first win. We've got our first win together, and it was the biggest race of the year."

For Tracey Clay, the promoter at Little Rock's I-30 Speedway, it was love at first sight.

Starting with partial rule changes this season with a full-on switch by 2022, I-30 will become the first track in the state to sanction its street stock class with the International Motor Contest Association of Boone, Iowa.

The IMCA sanctions modified racing in most parts of the country, but it does the same in other divisions of dirt racing, mostly in the Midwest.

Clay said she was sold on the change in September, when she attended the IMCA Super Nationals in Boone.

"We were there to see the modifieds, but the stocks floored me," she said. "You could throw a blanket over all 20 cars in each race. I said right then, 'This is what we are going to have at I-30.' "

With the IMCA, drivers are able to earn points for state, regional and national championships, as well as at their own local tracks.