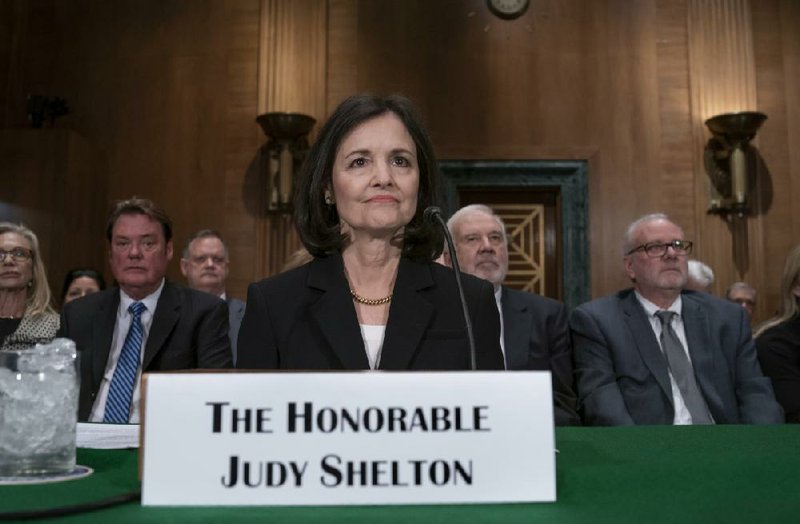 “Frankly, no one tells me what to do,” Judy Shelton, President Donald Trump’s nominee for the Federal Reserve, told the Senate Banking Committee during a confirmation hearing Thursday when asked if the Fed should operate independently of the White House. More photos at arkansasonline.com/214/shelton/. Video at arkansasonline.com/214fed/. (AP/J. Scott Applewhite)

WASHINGTON -- One of President Donald Trump's nominees for the Federal Reserve came under sharp questioning from senators Thursday over her unorthodox economic views, including from two Republicans whose doubts about her nomination could imperil it.

The nominee, Judy Shelton, sought to make her unconventional views an asset by promising to bring "intellectual diversity" to the Fed. Shelton has previously expressed support for a wide range of out-of-the-mainstream perspectives, including tying the dollar's value to gold. She has also raised concerns among economists and Fed watchers by questioning the need for the central bank's independence.

"Frankly, no one tells me what to do," Shelton said at one point. "I don't think it's the job of the Federal Reserve to accommodate political agendas" and "the Fed operates independently, as it should."

After the hearing, two key Republicans -- Sens. Pat Toomey of Pennsylvania and Richard Shelby of Alabama -- reiterated their misgivings about her nomination. A third, Sen. John Kennedy of Louisiana, said he was undecided.

[Video not showing up above? Click here to watch » https://www.youtube.com/watch?v=5QbN9CIivNg]

With three Republicans leaning against her or undecided, Shelton's nomination is at risk of remaining stuck in the Banking Committee. She would need all the Republican votes on the committee to recommend her nomination to the full Senate. The committee has a slim Republican majority of 13 to 12. Republicans also control the Senate.

Panel chairman Mike Crapo, R-Idaho, said a committee vote was possible after Congress returns from next week's recess, but he wasn't sure.

During the hearing, Toomey criticized Shelton's view that the Fed should consider acting to lower the value of the dollar if other nations appeared to be manipulating their own currencies.

"I think that's a very, very dangerous path to go down," Toomey said. "It's not in the Fed's mandate."

Shelbytold Shelton, "I do have trouble with some of your writings and some of your articles." After the hearing, he said he was still "concerned." Shelby is a former chairman of the Banking Committee who recently became its longest-serving member.

Democrats on the committee highlighted Shelton's previous criticism of the Fed for cutting interest rates to nearly zero in the aftermath of the recession, which it did amid a global financial crisis and soaring unemployment rate. Democrats noted that Shelton, like Trump, has reversed herself and now supports lower rates despite a much more robust economy.

"Ms. Shelton has too many alarming ideas and has flip-flopped on too many important issues to have this job," said Sen. Sherrod Brown from Ohio, the top Democrat on the committee.

The nominee also said she now strongly supports government insurance for bank deposits -- a key pillar of the U.S. banking system since the Great Depression -- even though she had questioned the value of such insurance in a 1994 book.

"The only pattern I see here is a political one, not an economic one," said Sen. Chris Van Hollen, D-Md.

Diane Swonk, chief economist at Grant Thornton, said putting Shelton on the board could send confusing signals to investors, who already view her as a potential Fed chairman if Trump were to win re-election and decide not to offer current Chairman Jerome Powell a second term.

"It sets up a communication challenge," Swonk said. "Financial markets are already looking at her as the Fed chair-in-waiting."

Shelton recently served as U.S. executive director for the European Bank for Reconstruction and Development, which helps former communist countries transition to market economies. She was previously a scholar at the Hoover Institution at Stanford University.

In addition to her, Trump has nominated Christopher Waller, research director at the St. Louis Federal Reserve Bank, for a second vacancy on the seven-member Fed board. Waller, who drew much less attention from the committee's senators Thursday, is seen as a far more conventional choice than Shelton. Some of his research examines the benefits of the central bank's independence from political interference.

Waller said he has attended more than 60 meetings of the Fed's policy-making committee. Before joining the St. Louis Fed, he worked as an academic, researching monetary policy, for 25 years.

If both nominees were to be confirmed by the Senate, Trump would have installed six of the seven Fed board members. They each have a permanent vote on the Fed's policy-making committee, which gives them significant influence over interest rates.

The president of the New York Federal Reserve Bank also holds a permanent vote on the interest rate-setting committee. The remaining four votes rotate annually among the Fed's 11 other regional bank presidents.

The Fed's board members, who are also called governors, rarely dissent from the Fed's policy decisions, though the regional bank presidents sometimes do. The board members also help shape the Fed's approach to financial regulation.

Many Fed watchers worry that Trump is weakening the Fed's independence with his frequent public attacks on Powell for not cutting rates more aggressively.

At Thursday's hearing, Shelton said she does support the Fed's independence, but she defended Trump's attacks. She noted that previous presidents had criticized Fed chairs behind the scenes; she called it "refreshing" that Trump has done so publicly via Twitter.

Information for this article was contributed by Christopher Rugaber and Martin Crutsinger of The Associated Press, by Jeanna Smialek of The New York Times and by Craig Torres, Christopher Condon and Erik Wasson of Bloomberg News.