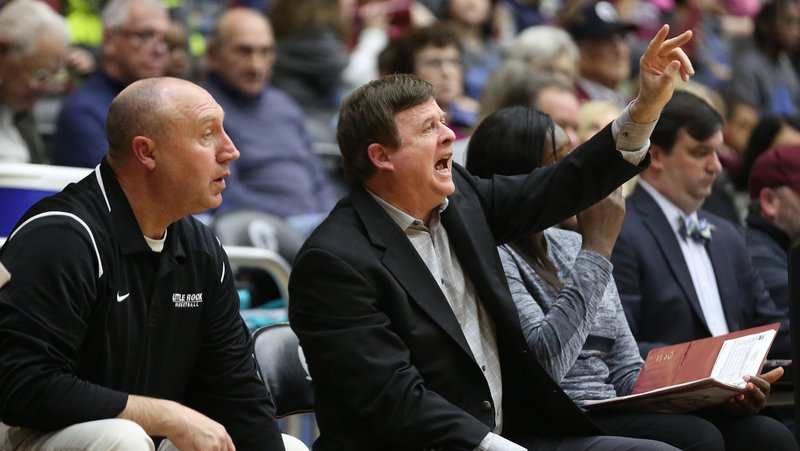 UALR head coach Joe Foley (center) calls a play from the bench during the fourth quarter of the Trojans' 50-47 loss to Texas State on Thursday, Feb. 13, 2020, at the Jack Stephens Center in Little Rock. See more photos at www.arkansasonline.com/214ualrwbb/ (Arkansas Democrat-Gazette/Thomas Metthe)

Twice in the past six days, University of Arkansas at Little Rock women's Coach Joe Foley has made a run at the career wins milestone, one that only six active coaches, and 12 all time, in Division I women's basketball can associate with.

Twice, his Trojans haven't been able to deliver.

The latest disappointment came at home Thursday in a 50-47 loss to Texas State at the Jack Stephens Center in Little Rock, as UALR has now dropped back-to-back games. The Bobcats (9-14, 2-10 Sun Belt Conference) entered the game tied for last in the league with Louisiana-Monroe.

History was still made Thursday, nonetheless -- just not the history Foley and his club wanted.

Texas State, which entered 0-7 in the all-time series in Little Rock, finally broke through and won in the Natural State's capital city. It came in front of an announced crowd of 2,557 at the Jack Stephens Center, which featured a majority representing local schools for the Trojans' annual school-day game.

UALR's Sun Belt regular-season title hopes took another major hit. There are still six games left -- including two against first-place Troy -- for UALR (10-13, 8-4) to make up ground, but it's going to take a big effort -- and some help -- down the stretch. 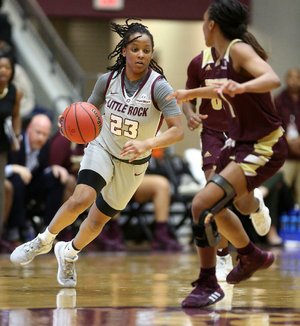 During their recent five-game winning streak, the Trojans' offense had appeared to have found a stride, averaging 65.8 points per game and 48.3% shooting.

But on Thursday, for the second consecutive outing, UALR was limited to scoring in the 40s and under 36% shooting.

"Just [having] a hard time getting the ball to go in the hole," Foley said about the offensive struggles.

Senior guard Kyra Collier indicated it went much deeper than that, offering what ended up sounding like an introspective critique. 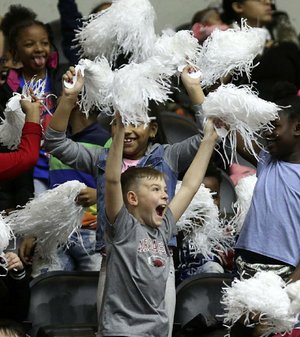 William Brooks, a third-grader at Murrell Taylor Elementary School in Jacksonville, cheers with his classmates after a score Thursday during the University of Arkansas at Little Rock women’s basketball game against Texas State in Little Rock. More photos at www.arkansasonline.com/214ualrwbb/. (Arkansas Democrat-Gazette/Thomas Metthe)

"Just not preparing, not being ready through practice, not approaching it the right way," said Collier, who finished with 13 points and six rebounds. "Just got to get better from here on out.

"My leadership, haven't approached it well and got my team ready for practice. One thing I have to do is come in as a leader and make sure that I'm preparing these young ones for these big games and conference time, because they don't understand. Starting with me, I have to do better as a leader."

That offense failed to come through late with the game hanging in the balance.

The game was tied 45-45 with 1:22 remaining after junior forward Teal Battle -- who finished with a team-high 15 points while tallying 9 rebounds, 5 assists and 6 turnovers -- hit the first of two free throws. But her second missed, and Texas State forward Da'Nasia Hood scored on the other end to put the Bobcats up two with under a minute left.

Hood posted a game-high 17 points on 7-of-21 shooting and grabbed 14 rebounds. Her three-pointer moments earlier in the fourth quarter at the 2:48 mark was critical, which had given Texas State a 45-41 lead.

After a quick UALR timeout, Texas State used a zone trap to force a turnover, and the Bobcats hit 1 of 2 free throws to push the lead to three with 21.1 seconds left.

Texas State's zone trap got the better of UALR again on the next possession, forcing another turnover that led to an easy layup in transition by Bobcats' guard Kennedy Taylor -- who finished with 11 points -- as her team up by five points with six seconds left to ice the victory.

"We worked on that, we prepared for that, we just didn't execute," Collier said of the offense's late turnovers.

Freshman forward Alayzha Knapp posted the first double-double of her career for the Trojans with 13 points and 11 rebounds.

The teams were tied 10-10 after the opening quarter before UALR led 21-19 at halftime. Heading into the final quarter, the score was once again tied, this time at 33-33. The largest lead of the day was only six, which came after UALR opened the first 3 1/2 minutes of the second half on a 8-4 run to go up 29-23.

But the fourth quarter saw Texas State finally take command late, as Foley remained stuck on No. 799. His third attempt at reaching the 800-club comes Saturday at home against Texas-Arlington.

"We don't talk about it with him, but the team, we definitely talk about it and saying we need to be a part of that for him," Collier said. "It's very important, but it's also important for our team to know how important it is to get a conference win."

Arkansas State (9-14, 6-6) picked up a team-high 16 points from Peyton Martin and 12 each from Jireh Washington and Morgan Wallace, but the Red Wolves were limited to 36% (18 of 50) from the floor in dropping their third consecutive game.

Texas-Arlington led 43-38 at the half. ASU managed to get within 45-42 at the 8:20 mark after a layup from Washington, but the Mavericks finished the third quarter by scoring 19 of the next 25 points.

Claire Chastain added 17 points and Terryn Milton 16 for the Mavericks.