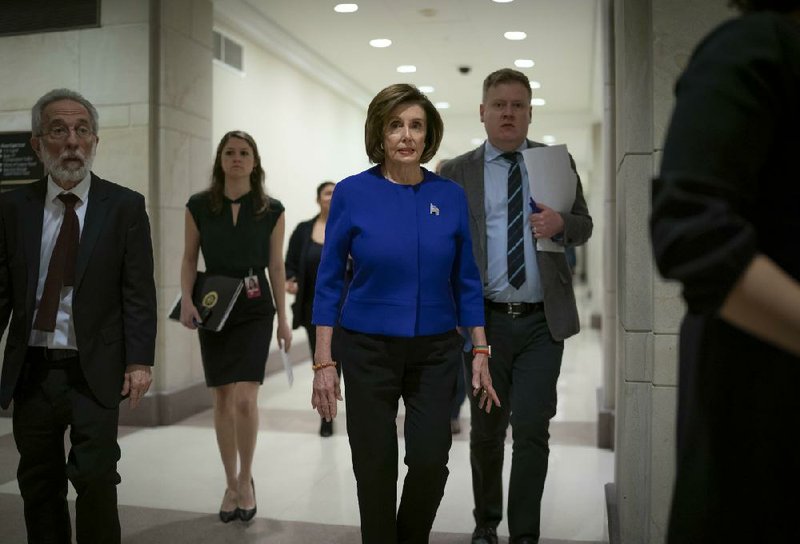 Speaker of the House Nancy Pelosi arrives Thursday to talk to reporters on Capitol Hill just before the House voted to remove the deadline for ratification of the Equal Rights Amendment. More photos are available at arkansasonline.com/214pelosi/ (AP/J. Scott Applewhite)

WASHINGTON -- The House of Representatives gave the Equal Rights Amendment a temporary new lease on life Thursday by voting to remove a 1982 deadline for ratification by the states.

The 232-to-183 vote, on a resolution introduced by Rep. Jackie Speier, D-Calif., pushes the issue to the Senate, where Sens. Ben Cardin, D-Md., and Lisa Murkowski, R-Alaska, have introduced a similar measure.

During debate on the House floor, Republicans argued that enshrining the ERA in the Constitution would mean abortion could not be restricted. Democrats focused on the legality of deadlines and the importance of equal rights.

"This has nothing to do with the abortion issue. That is an excuse, not a reason," said House Speaker Nancy Pelosi, D-Calif., arguing that women are still paid less than men for similar work, and often are shorted on pensions and maternity leaves.

[Video not showing up above? Click here to watch » https://www.youtube.com/watch?v=XYJP2lYerTg]

And yet "the ERA is still not enshrined in the Constitution," Pelosi said.

The Democratic side of the House floor erupted in cheers once enough votes were cast to ensure the resolution would pass. Republican Reps. John Curtis of Utah, Rodney Davis of Illinois, Brian Fitzpatrick of Pennsylvania, Tom Reed of New York and Jeff Van Drew of New Jersey joined 227 Democrats in voting for it.

Pelosi and some other female lawmakers wore purple to show their support for the long-sought amendment, which was first proposed nearly a century ago.

Three-quarters of the states must ratify a proposed amendment for it to be added to the Constitution. With new Democratic majorities in both chambers, the Virginia General Assembly met that threshold last month, becoming the 38th state to ratify the ERA.

Supporters of the amendment say Congress's deadline can be changed by a simple vote of the same body because the Constitution itself does not specify a ratification deadline. Others disagree.

In anticipation of Virginia's vote, the Justice Department's Office of Legal Counsel advised the national archivist not to certify the ratification because of the expired deadline.

Three lawsuits have been filed over the ERA, including one this month by the attorneys general of Illinois, Nevada and Virginia, calling for its addition to the Constitution. A lawsuit opposing ratification was filed in Alabama last year by the attorneys general of Alabama, Louisiana and South Dakota. A third lawsuit filed in Massachusetts in January supports ratification.

The ERA, first proposed in Congress in 1923, was reintroduced every year until it passed in 1972. Its 1979 ratification deadline was extended to 1982 after only 35 states ratified it. But no others ratified the measure before the second deadline passed.

The ERA was considered dead until 1992, when the 27th Amendment, which addresses the pay for members of Congress, was ratified 202 years after it was introduced. Unlike the ERA and other amendments proposed in the 20th century, it had no deadline for ratification.

The Nevada Legislature endorsed the ERA in 2017, followed by Illinois in 2018.

But five states that ratified the amendment in the 1970s have since said they wanted to rescind their votes. ERA proponents say those actions are moot because reversals have not been allowed in the past, while opponents say it's a clear signal of the will of the states.

"There's too much controversy about latecomers," Ginsburg said. "Plus, a number of states have withdrawn their ratification. So if you count a latecomer on the plus side, how can you disregard states that said, 'We've changed our minds?'"

Republicans on the House floor Thursday repeatedly quoted the justice's words as they marshaled arguments against the amendment.

Rep. Doug Collins, R-Ga., said the ERA would allow unfettered access to abortion, which he said could jeopardize fetuses with chronic, debilitating diseases. He noted that his 27-year-old daughter, Jordan, was born with spina bifida. "This is an open door to abortion on demand with no restrictions, no government interference. In fact, government would pay for it," an emotional Collins said.

"I completely concur with Justice Ginsburg's public statements about the need to reissue the amendment" and start over, Graham said Thursday in a statement that placed him in rare agreement with one of the court's most liberal members.

"It is clear the statutory period to have passed the ERA expired decades ago, and it would be necessary for it to be reintroduced to have constitutional viability," Graham said.

Information for this article was contributed by Patricia Sullivan of The Washington Post; and by Matthew Daly of The Associated Press.