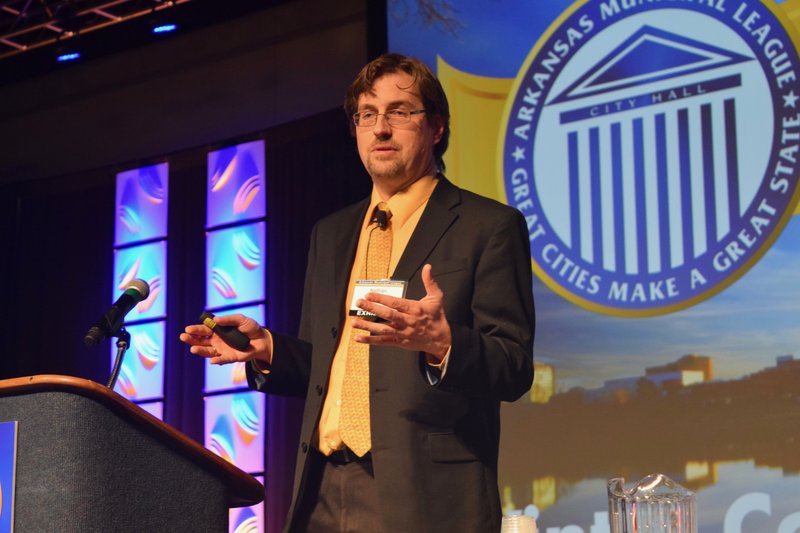 Arkansas Broadband Manager Nathan Smith speaks at a panel on the governor's rural broadband initiative in Little Rock on Thursday.

But in case service providers don't hold up their end of the bargain, Arkansas could rescind dollars meant to bulk up rural broadband infrastructure.

"In the worst case, if the ISP really doesn't deliver, then we might go after it and try to claw back the grant," the state's broadband manager, Nathan Smith, said during a panel discussion at the Municipal League's 2020 Winter Conference in Little Rock. "And so we'd rely on local authorities to help us sort of back that threat up by making sure they actually deliver."

In May Gov. Asa Hutchinson announced his goal of connecting all Arkansas communities with 500 people or more by 2022. The Arkansas Rural Connect Broadband Grant program is intended to distribute $25 million in state funds through municipalities, unincorporated communities and counties to entice internet service providers to venture into areas where there is little to no high-speed infrastructure.

Under the plan, which still awaits approval in the Arkansas Legislature, public entities would monitor and update the state twice a year regarding complaints about service providers once their network is online, Smith said.

Hutchinson's program relies on public entities reaching out to an internet service provider, or vice versa, to form a partnership, with the two entities co-applying for a grant. Service providers have the technical expertise to build the broadband systems that cities and towns lack, Smith said.

"We're not assuming that towns have the capacity to deliver broadband on their own," Smith said. "You need engineers, you need billing practices, and so forth. Typically, towns don't have that."

Smith's comments about clawing back a grant suggest that there will be a backstop if the partnership between a service provider and a public entity gets rocky.

A broadband internet connection remains inaccessible to many people in rural Arkansas. According to BroadbandNow, a site that tracks broadband data and connects consumers with internet service providers, Arkansas ranks 50th nationwide in connectivity. Just 78% of Arkansans have access to high-speed wired broadband.

However, elected officials have pushed back on elements of the governor's plan to boost rural broadband. In November, they argued that because eligibility was limited to cities, the plan ignored unincorporated communities that also lack high-speed connectivity. The plan was revised to include unincorporated areas and counties. Additionally, last month lawmakers pointed out that other sources of state and federal funds are already available.

Revisions to the rules governing the broadband program are under discussion in the Legislature, where they await approval from the legislative council.

Arkansas had banned government entities from building their own broadband infrastructure between 2011 and February 2019, when Hutchinson signed into law a repeal of the ban.

Clint Moore, an economic analyst for the Department of Commerce's Arkansas Development Finance Authority, reassured attendees Thursday that the state's broadband initiative does not mean municipal officials must be experts on broadband.

City officials merely need to "be happy with who's serving you, the price you're getting served, the customer service they offer you," Moore added.

During his speech earlier Thursday at the meetings, Hutchinson framed the issue as an urgent problem. The $25 million grant program will allow local leaders to maximize the flow of infrastructure dollars into their community and acquire broadband faster.

He recounted a plea from a teacher in Star City, delivered to Rep. Mike Holcomb, R-Pine Bluff, in which the teacher said many of her students live outside the city and, as a result, are at a disadvantage because of spotty internet access. The teacher said there is only one service provider in Star City, and it provides speeds of just 6 megabits per second at the same monthly cost of 50 megabits per second in other cities, Hutchinson said.

The governor added that during a recent conversation with Sonny Perdue, U.S. secretary of agriculture, Perdue said more federal money for broadband is on the way and that applications that include state money will get priority.

Allan Loring, a member of the Wrightsville City Council, said residents in his community of approximately 2,100 people about 15 minutes south of Little Rock are more concerned with slow internet speeds than no internet at all.

Loring said the internet "virtually shut down" during the holidays when his home was filled with multiple devices because family members were visiting. He asked AT&T to increase the speed, but the provider said Loring was receiving its best offer unless Loring wanted to pay extra, which he said may be "unfeasible."

The problem is not limited to his home, Loring said. Other community members are upset, too.

"They are most definitely concerned about it," Loring said. "Everybody wants to get these devices, but then they get them and they're virtually no good in the household."