Operator of 4 youth lockups set to exit contract with state 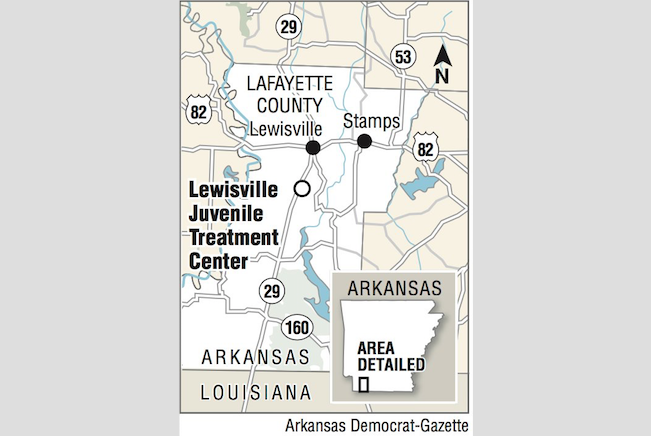 A map showing the location of the Lewisville Juvenile Treatment Center.

Citing a lack of support and financial loss, the company that manages four state youth lockups said it won’t continue its contract past June 30, although state officials said they had expected to work with the company for six more years.

The state hopes to find another company to operate the facilities to bring in more expertise in the best treatment for the children, said Keesa Smith, deputy director for children, youth and family services at the state Department of Human Services. The contract could be renewed annually, and Smith said she had anticipated renewing it for six more years.

A news release sent Thursday said the state expects to make an announcement with more details on future plans next week.

“ [Youth Opportunity] has been working hand in hand with us to make the changes …,” said Youth Services Director Michael Crump. “Things are getting a lot better. We plan to keep going forward with what we’ve been doing.”

Financial burdens for Youth Opportunity sprung primarily from construction that took longer than anticipated and facilities that weren’t filled, according to the nine-page letter. The company is paid per occupied bed.

Youth Opportunity lost close to $500,000 in July and continued losing money every month, the letter says.

Employees at the lockups will continue to work for Youth Opportunity until the end of June, according to the state’s news release. They were informed Thursday by letter of the contract’s end.

The letter, signed by Youth Opportunity chief executive officer and board chairman Ronald Hunter, says that the company kept the facilities fully staffed, increased employee salaries and added “unnecessary staff” to avoid front-line layoffs at the request of the Youth Services Division.

The division operates under the Human Services Department.

“Youth Opportunity Investments has attempted at every turn in our relationship with the Division of Youth Services to show good faith in the spirit of partnership. However, as is shown by the events that have occurred during our partnership, support has not always been there from the Department of Human Services and/or the Division of Youth Services, ” the letter says.

In late 2018, the state began an overhaul of the juvenile-justice system. Those efforts included more assessments of young offenders to determine whether they can be treated in their communities and decreasing the time they spend in lockups.

“Public safety is, of course, a priority, but so too is ensuring that we are not taking youth from their communities simply to fill up residential facilities,” Amy Webb, a department spokeswoman, said in a written statement. “That’s not the best approach for youth treatment nor is it the approach Arkansas agreed to take with [Youth Opportunity Investments].”

Gary Sallee, a spokesman for Youth Opportunity, said the decision was based on best business practices.

“We give high marks for the Department of Youth Services and to the state for their desire to do things,” Sallee said. “I would desire to drive a Ferrari, but I don’t have the money, and I don’t expect someone else to make the payments for me.”

Brooke Digby, a juvenile ombudsman for the state, said the company’s complaints are a testament to the “positive changes” the division has made and show that Youth Opportunity wasn’t supportive of transformation efforts.

“Our youth should never be viewed as dollar signs,” she said in a written statement. “It’s a wonderful thing when facilities aren’t full — it means less commitments and more opportunities to treat youth closest to their homes.”

The overall population of children in lockups has decreased by 12% since July, and the facilities weren’t full when Youth Opportunity started its contract work. The company was prepared for 162 children, according to the letter.

The letter also says that physical improvements needed at the Mansfield facility cut back on bed space.

On June 14, Youth Opportunity found that conditions at two dorms at Mansfield “had deteriorated to the point they became inoperable further limiting the program’s capacity.” Those conditions consisted of plumbing problems, a failed air-conditioning unit, broken windows, a lack of locks and two leaky water fountains, the letter said.

Webb said construction at Mansfield took two months longer than expected but “there was still plenty of capacity among the four centers to bring in youth.”

The company’s letter says there were also plans to “ramp up” the population at Lewisville, but that couldn’t be accomplished because of bathroom renovations.

“At no time prior to the granting of the contract to Youth Opportunity Investments did the Division of Youth Services staff give even the slightest indication that the facilities would need substantial repairs before they could fully house youth,” the letter says.

Webb added that officials spoke with Youth Opportunity representatives about the financial concerns and asked them to submit ideas on what the state could do to help. Youth Opportunity suggested closing Lewisville by moving the boys into the all-girls Harrisburg facility and the girls to Mansfield.

“However, we were clear in our contract that our intention was to have an all-girl center because of the unique needs of the girls. So moving girls to Mansfield was not ideal,” Webb said in a statement.

Youth Opportunity never officially submitted a plan or another alternative, she said.

The letter says that during a meeting with Smith in July, Youth Opportunity officials were told that steps would be taken to get every facility to full capacity.

The letter outlines changes made at the facilities and to the programming since Youth Opportunity took over, such as “extensive retraining” of staff members, adding staff trainers and more director positions and implementation of a program to reduce the recidivism rate for offenders, among other things.

Some of the changes were done “in partnership” with the Youth Services Division. These include a fencing upgrade at Mansfield, additional locks at Mansfield and fresh paint to cover graffiti, among other things.

“We came in, saw this need, we provided what we think was needed,” Sallee said. “… We just can’t continue to pay for it.”

Youth Opportunity is named as the plaintiff in two lawsuits filed by mothers in Jefferson and Pulaski counties who allege employees at the Lewisville facility failed to protect their sons and restrained them for long periods of time. The suits were filed in January.

Earlier this month, Southwest Arkansas Counseling and Mental Health Center Inc. said in a letter that it would end its contract with Youth Opportunity to provide treatment at Lewisville because of late payments, a lack of resources and a hostile work environment for therapists.

Youth Opportunity was one of two companies that bid for the contract. The other was Rite of Passage of Nevada. 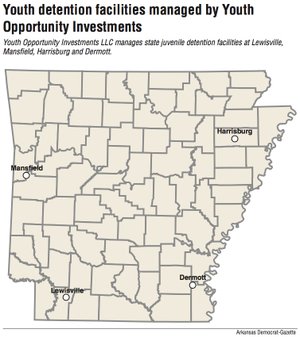