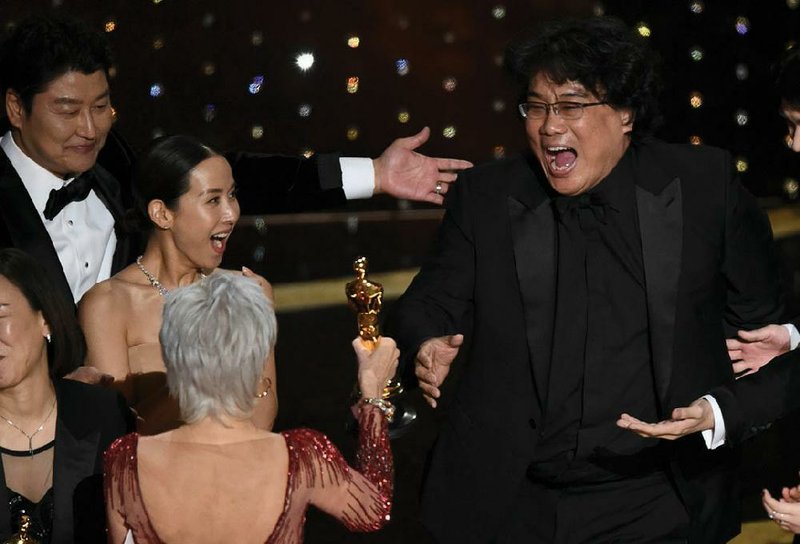 You may not concur, which is fine, even great. Movies were made for vigorous argument, for the passionate drawing of aesthetic and ideological battle lines. But if we were to look at the Oscar pantheon from this young century alone, I would say that Parasite, Bong Joon Ho's genre-blurring marvel of a darkly comic thriller, joins an elite company of best picture winners -- I'm thinking of Moonlight, 12 Years a Slave, The Hurt Locker, No Country for Old Men, The Lord of the Rings: The Return of the King and not much else -- that could be plausibly defended as the very finest films nominated in their respective years.

And yet, even within said elite company, Parasite stands in a history-making class by itself. Bong's movie is not just the first Korean production but also the first non-English-language picture ever to win the Oscar for best picture. (He also became the first Korean filmmaker to win the Oscar for directing.) Parasite is the first movie to win best picture and the international feature award (formerly known as the foreign-language film award) in the same night.

It is the second winner of the Palme d'Or, the Cannes Film Festival's top prize, to take the best picture Oscar, and the first since Marty pulled off the same feat 64 years ago, thus forging -- or renewing -- a symbolic bond between the Hollywood establishment and the most venerated platform for international cinema.

Parasite has dealt a much-needed slap to the American film industry's narcissism, its long-standing love affair with itself, its own product and its own image. It has startled the academy into recognizing that no country's cinema has a monopoly on greatness -- no small thing at a time when trumped-up nationalism and xenophobia have a way of seeping into our art no less than our politics.

And in a year of unwelcome resurgence for #OscarsSoWhite, especially in the acting categories (where Cynthia Erivo was the sole actor of color nominated), the sight of actors Song Kang Ho, Park So Dam, Choi Woo Shik, Lee Jung Eun and other members of the Parasite cast and crew taking the stage was nothing less than a balm -- and a sign, perhaps, that the academy's efforts to diversify its ranks and become a truly global institution are having an imperfect but measurable effect.

The victory of Parasite has shattered a glass ceiling that held stubbornly firm for 92 years, even in the face of best picture nominees such as Jean Renoir's Grand Illusion (1937), Ingmar Bergman's Cries and Whispers (1972), Ang Lee's Crouching Tiger, Hidden Dragon (2000) and Michael Haneke's Amour (2012) -- masterpieces all, it's worth noting, and had any of them won, they would have restored some luster to the academy's often lackluster history.

By no means should Parasite have been the first movie to achieve this milestone; it frankly boggles the mind, in ways both thrilling and sobering, to realize that Bong has pulled off something that Fellini and Bergman and Kurosawa and Truffaut could not. Hell, if more academy members had voted for Alfonso Cuarón's Roma last year, we might have been spared the indignity of Green Book.

But today is not a day to spend dwelling on the regressive missteps and missed opportunities of Oscar past. It is not a day to waste time stewing about Crash and A Beautiful Mind and Forrest Gump and all the times when art lost out to sentimentalized views of race, class and (American) history. I'd much rather think about all the Korean-non-conversant moviegoers who, having slept on Parasite all season long, will finally, grudgingly force themselves to surmount "the 1-inch-tall barrier of subtitles," in Bong's unimprovable phrase, and watch the damn thing. My God, they're in for a treat.

I wouldn't go so far as to say that all is forgiven ... but my God, it matters that the best picture Oscar has gone to Parasite.

I wouldn't go so far as to say that all is forgiven. Academy absolution is in the eye of the moviegoer. But my God, it matters that the best picture Oscar has gone to Parasite, a morally galvanizing, viscerally unsettling and emotionally devastating movie about patriarchal sins, broken families, wealth inequality and the class hierarchy of Seoul as a microcosm of capitalist rot. Remember that until this year, no Korean movie had even been nominated for the international feature Oscar -- or any Oscar -- let alone come within spitting distance of best picture. What can we say? When South Korea makes history, it really makes history.

Bong, of course, is not a stand-in for Korean cinema, and it would be reductive to see him as such. He is not Lee Chang-dong, Park Chan-wook or Hong Sang-soo, to name three important, internationally renowned Korean filmmakers that any self-respecting member of the academy should be familiar with. Championed for years by none other than his recent Oscar rival Quentin Tarantino (to whom he gave a moving shout-out from the stage) and hailed from the beginning as an heir to the mantles of Hitchcock and Spielberg, Bong is one of those filmmakers who tell stories in a cinematic idiom so fluent and accessible that conventional language barriers, for all intents and purposes, cease to exist.

One of the many ironies underpinning the victory of Parasite is that Bong, more than most of his contemporaries, is a student and ardent lover of American cinema, someone who grew up watching Hollywood movies on American Forces Korean Network, the TV channel for U.S. soldiers stationed in Korea. You see that love in his work.

His 2003 masterpiece, Memories of Murder, is an epistemological serial-killer thriller that anticipates David Fincher's Zodiac (and remains one of the few movies worthy of the comparison). His 2006 hit, the gloriously entertaining monster movie The Host, should be essential viewing for every Hollywood filmmaker tasked with a Godzilla or Pacific Rim reboot. The two pictures Bong made just before Parasite -- the thrillers Snowpiercer and Okja -- were made with Hollywood stars and big-budget visual effects and shot mostly in English.

It's instructive, I think, that after two stabs at going Hollywood, it was Bong's return to Korean filmmaking -- to an intimately scaled, modestly budgeted production with an entirely Korean cast and crew -- that resulted in a midcareer masterpiece, a movie that spoke more directly and powerfully to audiences than anything he had made in years. He made a movie, in short, that met the academy more than halfway -- and the academy, to its credit, responded in kind.

In a year when its members could have voted for a British war drama that exudes a more obvious kind of Oscar-worthiness (1917) -- or two great American movies that are, in themselves, monuments to the greatness of American cinema (Once Upon a Time ... in Hollywood and The Irishman) -- the victory of Parasite is an enormously meaningful statement.

And not one that I expect will be repeated anytime soon. No one who has followed the Oscars with any regularity over the years can be naive enough to think that progress is a straight line. A major step forward one year will almost certainly be answered by two steps backward the next. Post-Parasite, I wouldn't steel myself for a sudden succession of best picture winners hailing from China, Mexico, Germany or Senegal.

There will be retrenchments and detours. There will be reminders that the academy, in retaining its long-standing members while broadening its international reach, is an unwieldy organization often at cross-purposes with itself, where one hand scarcely knows what the other is doing. Maybe that's another reason to celebrate Parasite and the anxious, unsettled moment to which it speaks so indelibly: This may be the greatest movie ever made about, and for, a house divided.