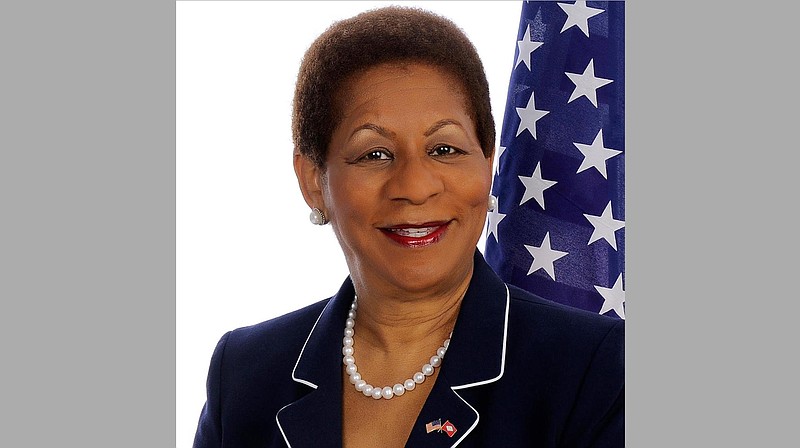 PINE BLUFF -- The state of the city is tracking steadily upward, according to Mayor Shirley Washington, who delivered her fourth annual State of the City address Thursday night at the Pine Bluff Convention Center.

Her message centered around progress that she said has been made over the past four years and the importance of staying the course for that progress to continue.

The mayor outlined a number of successes, including the new aquatic center that opened in June and features an eight-lane competition pool, a therapeutic spa, a water slide, and a children's play zone.

"This center is serving as an ideal location for swim meets, physical therapy, and more," Washington said. "And thanks to an $800,000 grant from the U.S. Department of Health, local students now have access to free swimming and physically enriching activities that will improve their overall health."

The mayor, who is involved in a three-way race with two City Council members for a second term, said the city has made progress addressing blighted neighborhoods and pursuing new growth.

"As we clear unredeemable structures, we will also pursue new growth," Washington said. "In 2020, the city will partner with various entities to build affordable housing throughout the city."

The mayor said there were a number of successes on the public-safety front as the Police Department assisted federal authorities in indictments against violent offenders, putting several drug traffickers in jail and a large quantity of illegal narcotics out of circulation. She said the city's involvement in training in the use of anti-overdose drugs provided resources to help emergency responders reverse the effects of overdoses, and body cameras and radios have helped make police more responsive and efficient.

On the economic front, the mayor said the city plans to continue supporting partnerships it has forged with Go Forward Pine Bluff and the Quapaw Nation.

The Quapaw Nation is building the $350 million Saracen Casino and Resort, scheduled to be open this summer.

"Partnerships like this are expanding our tourism industry, creating jobs, and increasing revenue," Washington said, noting that the Saracen Casino Annex, which opened in October, has already begun providing approximately $100,000 a month in additional revenue to the city.

"As the result of this new revenue," she said, "we were able to raise salaries for city employees and our first responders."

She touted an increase in activities for young people, such as the city-wide mentorship program, the summer youth employment program and the Mayor's Youth Council. She announced that renovations to the city's Merrill Center, a multipurpose sports complex, have begun.

"Soon, it will be a state-of-the-art facility that our youth deserve," Washington said.

The mayor said that recent successes have begun changing the narrative in Pine Bluff and people around the state are taking notice.

"Today, we are known for more than our challenges," she said. "We are counted among the best and brightest in Arkansas."

Win Trafford said the speech highlighted many gains the city is making and he voiced his support for her reelection.

"It is my hope and my prayer that she continues to be our mayor for another four years," said Trafford, who is not seeking reelection to his council seat. "She's been very effective and I have loved working with her."

Ivan Whitfield, who is opposing Washington in the election, was positive in his assessment of the mayor's speech, but said he would have different priorities in the job.

"I would put our public safety first and foremost, I've always said that," Whitfield said. "I would look at our economic stability and making sure that we don't depend on the casino to be the save all. At this point it's vitally important that we bring in something besides the casino."

Steven Mays, who also is running for mayor, said he sees room for improvement.

Glen Brown Jr. said he believes the city is on the right track and said the priorities outlined by the mayor are well aligned with the needs of the city.

"I'm proud of the accomplishments that we've achieved under her leadership and I look forward to the completion of the projects that we currently have going," he said. "I think we're moving in a really good direction."

Lloyd Holcomb Jr., who is facing two opponents in his bid for reelection to his City Council position, concurred with Brown's comments.

"The city is moving in the right direction with great accomplishments under her administration," he said.