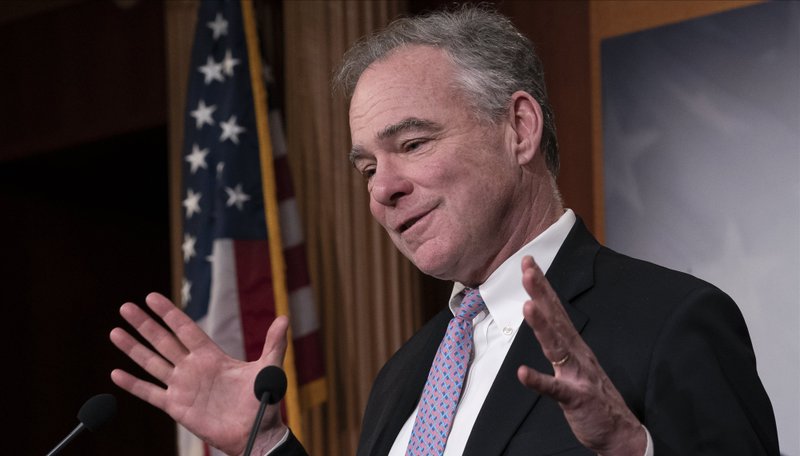 “We’ve been talking to our constituents, we’ve been listening to them, and we know what they think about another war in the Middle East right now,” said Sen. Tim Kaine, who drafted the resolution. More photos arkansasonline.com/214senate/. (AP/J. Scott Applewhite)

Eight Republicans joined all Democrats in voting 55-45 for the measure, despite warnings from the president that challenging his war powers would "show weakness" and "sends a very bad signal" to Tehran. Trump almost certainly will veto the measure if it passes in the House, and neither chamber of Congress has the votes to override that veto, lawmakers say.

"We've been talking to our constituents, we've been listening to them, and we know what they think about another war in the Middle East right now," said Sen. Tim Kaine, D-Va. "[Trump's] got an election that he's focused on and he wants to win. He could well veto it and then adjust behavior."

While Trump and other presidents "must always have the ability to defend the United States from imminent attack, the executive power to initiate war stops there," Kaine said. "An offensive war requires a congressional debate and vote."

[Video not showing up above? Click here to watch » https://www.youtube.com/watch?v=pQ1D2KKY_Es]

"We need a Congress that will fully inhabit the Article I powers," Kaine added, referring to the portion of the Constitution that grants Congress the power to declare war. "That's what our troops and their families deserve."

Kaine drafted the resolution in early January as tensions ratcheted up with Iran after the drone strike in Baghdad that killed Qassem Soleimani, Iran's top general.

Both Republicans and Democrats who sponsored the resolution insisted that the measure was not intended to tie Trump's hands but to reassert the constitutional prerogatives Congress has on matters of war. For decades, lawmakers in both parties have ceded those powers with little resistance.

Half the Senate Republicans who broke ranks with Trump had done so before on the same issue. In June, Susan Collins of Maine, Mike Lee of Utah, Rand Paul of Kentucky and Jerry Moran of Kansas joined Democrats in backing an amendment to the annual defense bill requiring that Trump approach Congress before taking military action against Iran, except in cases of clear self-defense or imminent attack.

In March, those four Republican senators, along with Lisa Murkowski of Alaska and Todd Young of Indiana joined Democrats to back a war-powers resolution ordering the president to stop helping the Saudi-led military campaign in Yemen.

Sens. Lamar Alexander of Tennessee and Bill Cassidy of Louisiana, who have voted with Trump on previous Iran and war-powers measures, joined the group of Republicans breaking with the president Thursday, stating that there are limits to how much the president can do without first consulting Congress.

For some of those Republicans, the vote was not a criticism of the Soleimani strike but an assertion of the need for congressional authorization before the administration embarks on a conflict.

"If this resolution was in effect at the beginning of the year, President Trump would have still been able to carry out strikes against Iran and General Soleimani [which I supported]," Cassidy said in a statement explaining his vote. "The founders gave Congress the power to declare war under Article 1 of the Constitution; we should fulfill this responsibility."

Democrats and Republicans alike criticized a briefing by the Trump administration shortly after the drone strike, saying U.S. officials offered vague information about a possible attack being planned by Iran but no substantial details.

The resolution also directs Trump to terminate use of military force against Iran or any part of its government without approval from Congress.

Lee supports Trump's foreign policy, including toward Iran, but said Congress cannot escape its constitutional responsibility to act on matters of war and peace.

As the Senate debate made clear, "there is abundant support for the United States taking tough positions with regard to Iran," Lee said. "And as part of that we want to make sure that any military action that needs to be authorized is in fact properly authorized by Congress. That doesn't show weakness. That shows strength."

Collins, a co-sponsor, called the resolution "much needed and long overdue." In recent decades, "Congress has too often abdicated its constitutional responsibility on authorizing the sustained use of military force," she said.

Senate Majority Leader Mitch McConnell and many other Republicans opposed the resolution, saying that it would send the wrong message to U.S. allies. "Just as we have successfully sent Iran this strong signal of our strength and resolve [by killing that country's top general], a blunt and clumsy war powers resolution would tie our own hands," McConnell said.

"If this passes, the president will never abide by it -- no president would," Sen. Lindsey Graham, R-S.C., said. "I want the Iranians to understand, when it comes to their provocative behavior, all options are on the table."

Sen. James Risch, R-Idaho, argued against the resolution, saying that Congress' time would be better spent passing a resolution cheering Trump, as it did for former President Barack Obama for ordering the operation that led to the death of Osama bin Laden -- who, Risch argued, posed a much less imminent threat to the country than Soleimani did.

Presidents of both parties, including George W. Bush, Obama and Trump, have said they have the right to order military action as a matter of self-defense when they see threats they define as "imminent."

But some lawmakers say the executive branch has expanded its war powers to the detriment of Congress, particularly when it invokes congressional authorizations passed in 2001 and 2002 to support action in conflicts never envisioned at that time.

Efforts in Congress to repeal the old authorizations or write new ones have failed.

Sen. Dick Durbin of Illinois, the No. 2 Democrat in the Senate, said that he had voted many times to send troops to war -- first as a member of the House and then later in the Senate. He described them as "the toughest votes" he ever had to cast, "knowing that in the best of circumstances, that Americans will die."

"Before you make that decision, you have to think long and hard, and many members of Congress would like to race away from that," he said. He described the rationale adopted by many lawmakers as: "I'd just rather blame the president if it turns out bad."

National security adviser Robert O'Brien said the strike on Soleimani was justified by Congress' 2002 authorization of the war on Iraq.

The debate over Iran also has been fueled by many lawmakers' frustration at what they see as a lack of candor from administration officials about what prompted the strike on Soleimani.

Lee, who openly criticized the administration for its mixed and limited messages, said that voting to reassert Congress' war powers "should not be controversial."

It is not clear that the bipartisan nature of the vote in the House will be as strong as it was in the Senate.

The House must take up Kaine's resolution before it can be sent to Trump's desk -- something House Speaker Nancy Pelosi promised Thursday to do "in the coming weeks."

Last month, the Democrat-controlled House passed a similar but nonbinding Iran war-powers resolution by a vote of 224-194. Only three Republicans joined most of the Democrats to support that measure.

The three senators seeking the Democratic nomination for president -- Amy Klobuchar of Minnesota, Bernie Sanders of Vermont and Elizabeth Warren of Massachusetts -- all returned to the Capitol from campaigning and backed the war-powers resolution.

Information for this article was contributed by Karoun Demirjian of The Washington Post; by Catie Edmondson of The New York Times; and by Matthew Daly of The Associated Press. 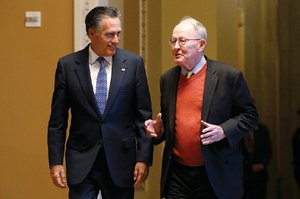 Sen. Mitt Romney, R-Utah, left, and Sen. Lamar Alexander, R-Tenn., return to the Senate chamber after a meeting in the Majority Leaders office during a break in the impeachment trial of President Donald Trump at the U.S. Capitol Friday Jan 31, 2020, in Washington. (AP Photo/Steve Helber) 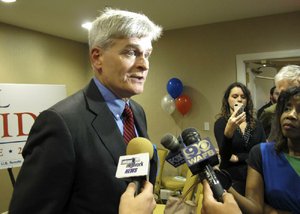