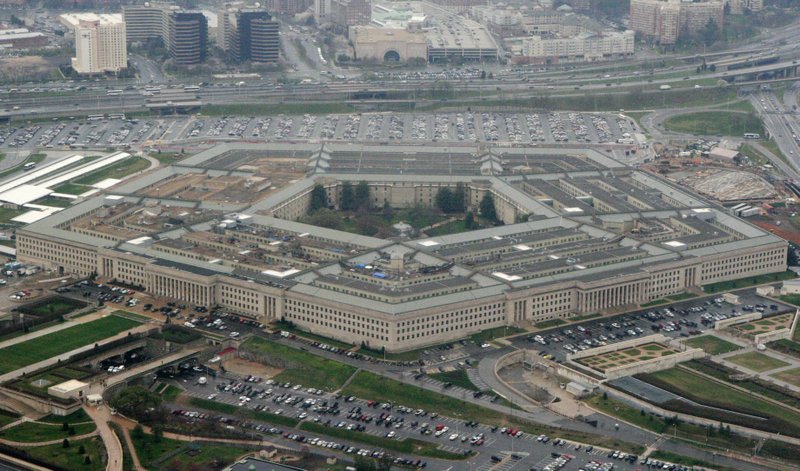 FILE - This March 27, 2008, aerial file photo, shows the Pentagon in Washington. A Federal court has ordered the Pentagon to temporarily halt work with Microsoft on its $10 billion military cloud contract, Thursday, Feb. 13, 2020, after Amazon sued alleging that President Donald Trump's bias against the company hurt its chances to win the project. Amazon requested the court issue the injunction last month. Both the documents requesting the block and the judge's decision to issue the temporary injunction are sealed by the court. (AP Photo/Charles Dharapak, File)

NEW YORK -- A federal judge Thursday ordered a temporary halt to Microsoft's work on a $10 billion military cloud contract, a win for Amazon, which sued the U.S. government last year for awarding the contract to its rival.

Amazon's lawsuit, filed in November, alleged that President Donald Trump's bias against the company hurt its chances to win the project. Amazon and Microsoft were finalists for the lucrative contract, for which Amazon was considered an early front-runner.

The project, known as Joint Enterprise Defense Infrastructure, or JEDI, will store and process vast amounts of classified data. It's intended to improve the Pentagon's communications with soldiers on the battlefield and would use artificial intelligence to speed up its war planning and fighting capabilities.

Pentagon spokesman Lt. Col. Robert Carver said in a statement that the department was disappointed in the ruling that delayed changes "and deprived our war-fighters of a set of capabilities they urgently need." But he said the Pentagon remained sure of its decision to choose Microsoft.

Microsoft echoed the disappointment in a statement Thursday, but said it believes that it will ultimately be allowed to move forward with the project. Amazon did not immediately respond to a request for comment.

Charles Tiefer, a government contracting law professor at the University of Baltimore, called the order to stop work on the project "striking," noting that judges typically halt work on contracts when they see some merit in the case.

Earlier this week, Amazon asked to question Trump for its case. In July, Trump publicly stated that other companies told him the contract "wasn't competitively bid," and he said the administration would "take a very long look" at it. Amazon Chief Executive Officer Jeff Bezos has long been a target of Trump's ire; the president calls the Bezos-owned Washington Post "fake news" whenever it publishes unfavorable stories about him.

In arguments making a case for Trump's deposition, Amazon sought to fit Trump's actions on the JEDI contract into a broader pattern of interference. That included the president's role in a border wall contract, his push to block AT&T's acquisition of CNN parent company Time Warner and his dealings with Ukraine, which led to his impeachment.

Microsoft opposed Amazon's request for depositions in a court filing this week, arguing that Amazon "is grasping at straws to find support for its baseless allegations." Microsoft, arguing that government contract professionals did their jobs properly regardless of Trump's tweets, said Amazon "impugns, demeans and discredits government personnel at all levels, despite the utter absence of any support for their accusations."

Amazon asked the court to halt work on the project last month. Both the documents requesting the block and the judge's decision to issue the temporary injunction are sealed by the court.

A public court notice, however, confirmed the injunction on the Pentagon and noted that Amazon will have to establish a security fund of $42 million that will be used to pay damages if the court later finds the injunction was improper. No further details of the decision were immediately available.

Amazon must submit a plan for offering the money to the court by Thursday, and it must agree to redactions to the judge's order no later than Feb. 27 so it can be made public.

The preliminary injunction was a "prudent decision" given the complexities of the deal and the monetary stakes, and the $42 million demanded from Amazon would not be a burden for the company, said Daniel Ives, an analyst for Wedbush Securities who has been tracking the JEDI contract.

In another court filing this month, Amazon argued that an injunction was necessary to prevent it from losing the profit it could earn from the contract.

The JEDI contract has also been in the spotlight because it is viewed as crucial to the Pentagon's efforts to modernize its technology. Much of the military operates on computer systems from the 1980s and '90s, and the Defense Department has spent billions trying to make them talk to one another.

Ives, the analyst, has said landing the JEDI contract put Microsoft in a position to earn the roughly $40 billion that the federal government is expected to spend on cloud computing over the next several years.

Information for this article was contributed by Joseph Pisani, Rachel Lerman and Matt O'Brien of The Associated Press and by Kate Conger of The New York Times.