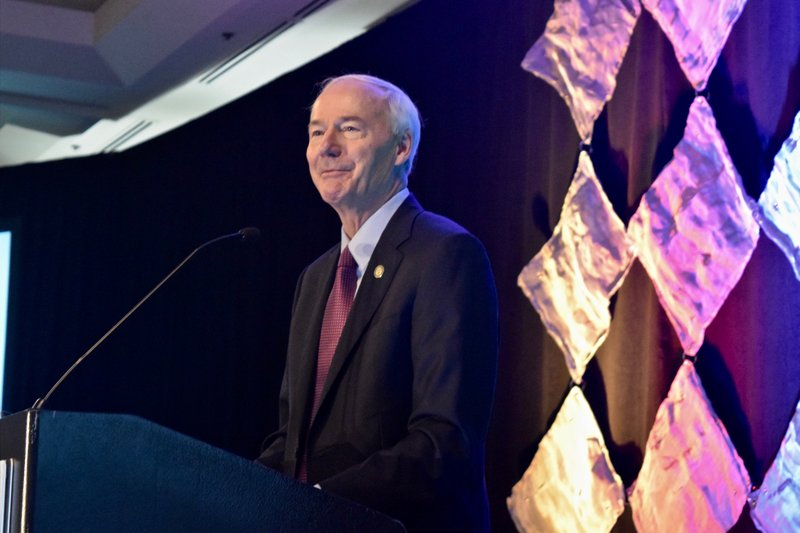 Local officials, legislators and industry leaders expressed concerns Friday about a grim future for Arkansas' infrastructure if the half-percent sales tax dedicated to transportation is allowed to sunset.

On the last day of the Arkansas Municipal League's winter conference in Little Rock, speakers challenged city and municipal leaders from across the state to emphasize to communities the need to maintain the state tax on the sale of gasoline. It is set to expire in 2023.

Gov. Asa Hutchinson and other officials are advocating a proposed constitutional amendment on the 2020 general election ballot -- Issue 1 -- that would make the tax permanent. The half-percent sales tax was originally approved by voters in November 2012 and was to expire after 10 years.

State officials project the tax will raise about $205 million a year for highways and about $89.6 million to be split between cities and counties.

Arkansas' combined state and local sales-tax rate of 9.465% ranked second-highest in the nation behind Tennessee's 9.469% as of July 2019, according to the Washington, D.C.-based Tax Foundation.

Approval of the proposed amendment would provide funding for thousands of miles of interstate highways and farm-to-market roads, as well as money to repair and replace deteriorating bridges, said Chris Villines, executive director of the Association of Arkansas Counties.

"Infrastructure is important to all of us," Villines told a crowd of about 450 at the Statehouse Convention Center. "There are no red or blue potholes."

Scott Bennett, executive director of the Arkansas Department of Transportation, said the measure is needed because highway revenue has remained relatively flat over the past 30 years.

"We have had three fuel tax increases since 1983, but people are also buying vehicles that are more fuel-efficient," Bennett said. "It has kept the revenue relatively flat while prices for construction and repairs have continued to increase."

Bennett said $10 million could have paid for 200 miles worth of overlay in 1995, but today it would cover only 54 miles.

Joe Quinn, executive director of the Arkansas Good Roads Foundation, said it's important that community leaders make Issue 1 relatable for residents, suggesting that officials tell citizens what road projects were completed over the past few years with the assistance of the tax money.

"Paint a picture," Quinn said. "That is how you localize the story."

Mark R. Hayes, executive director of the Arkansas Municipal League, said voters must know what is at stake. There is a uniqueness to each city in the state, he said, but where cities are the same is in their ability to move cars and trucks across streets and bridges.

Bennett said allowing the tax to sunset would mean a 30% reduction in funding.

"That means our jobs then are just trying to maintain a declining highway system," he said. "It might mean turning highways from pavement into gravel."

Villines said if funding disappears for counties, then money for road repairs would have to come out of another part of the budget.

"If we lose funding, then sometimes we have to start pulling from other sources like rural policing," he said. "Poorer services and poorer roads."

Robert Moore, a state highway commissioner for the Department of Transportation, warned that bad roads also could affect tourism.

"For rural east Arkansas, if we don't take advantage of tourism and our natural resources, then our growth is limited," he said.

The 2020 ballot proposal, referred to voters by the Legislature, is the second part of Hutchinson's $300 million highway plan.

Act 416 also diverts casino tax revenue beyond $31.2 million each fiscal year to the state Department of Transportation and guarantees the department a minimum of $35 million a year from casino taxes, the state's restricted reserve fund and other sources.

Act 416 is projected by state officials to raise about $95 million more a year for the Department of Transportation and about $13 million a year each for cities and counties.