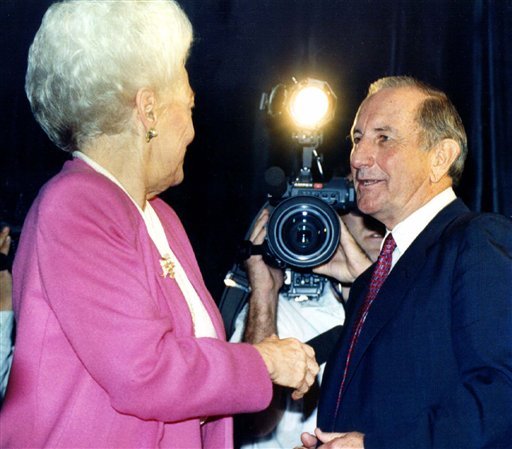 Clayton Williams, then a Republican candidate for Texas governor, rejects a handshake from his Democratic opponent, Ann Richards, in Dallas in this October 1990 file photo. Richards had previously called on Williams to explain his relationship with a Houston loan broker under federal investigation for drug-money laundering, and Williams responded in the joint appearance by telling Richards, "I'm here to call you a liar today." (AP / Pat Sullivan )

DALLAS — Clayton Williams, a colorful Texas oilman and philanthropist whose 1990 run for governor was derailed after joking about rape and acknowledging he went a year without paying income taxes, has died. He was 88.

“He had just a huge personality,” Pollard said.

Williams, who graduated from Texas A&M University in 1954, provided millions to the school, including providing the lead gift in 1985 toward the construction of the school’s alumni center, which is named for him, the university’s alumni association said on its website.

The race between Williams, a Republican, and Ann Richards, a liberal Democrat, was dubbed “Claytie and the Lady” and was initially considered Williams’ to lose.

Williams was known for his cowboy image and colorful phrases — he promised to introduce young drug offenders to “the joys of bustin’ rocks.” The silver-haired Richards was also known for her turns of phrase, reminding delegates of the 1988 Democratic National Convention that Ginger Rogers did everything Fred Astaire did, “only backwards and in high heels.”

The rape comment, which Williams later dismissed as “barnyard language,” came after he invited political reporters to his ranch near Alpine to watch him round up cattle. On the cold, rainy day, reporters overheard Williams compare the weather to rape: “If it’s inevitable, just relax and enjoy it.’”

He apologized, but the damage was done. When the Houston Chronicle asked him in 2011 if he was concerned the comment would define his legacy, he replied: “There’s nothing I can do about it. My grandfather had a saying: If you can do something about it, do it. If you can’t, don’t worry about it.”

Pollard said that his uncle’s comment wasn’t reflective of how he felt about women, and noted that it was used against him for the rest of the campaign.

During a joint appearance in Dallas less than a month before the November 1990 election, Williams rejected Richards’ outstretched hand and called her a liar. He also revealed during the campaign that due to an oil bust he went an entire year in the mid-1980s without paying any income taxes.

Williams told the Chronicle for that story that he “made it OK for Bubba to vote Republican,” noting that before him, many Texans had associated Republicans with the country club crowd. He was vying to become only the second Republican governor since Reconstruction.

Richards, who died in 2006, served as Texas governor for one term before losing an re-election bid to Republican George W. Bush, the future president. The state has not elected a Democrat to the governor’s office since.

Williams was also remembered as a generous benefactor.

State Sen. Kel Seliger, a Republican from Amarillo, told the Austin American Statesman that Williams “was a giant in our community and leaves a legacy that won’t be soon forgotten.”

Williams, who grew up in Fort Stockton, started his career by selling oil and gas leases there. In the 1980s, he formed ClayDesta Corp., named for himself and his wife, Modesta. Its holdings included a real-estate and property development firm, as well as ClayDesta National Bank and a long-distance telephone company that he sold in 1989. That sale, for $43 million in cash and stock, lifted him out of debt and essentially encouraged him to run for governor the next year.

But he had his biggest successes as an oilman. In 2017, Noble Energy agreed to buy Williams’ Midland-based Clayton Williams Energy for $2.7 billion in stock and cash.

“He did things big. He was big in oil and gas. He was a wildcatter. He was a risk taker,” Pollard said.