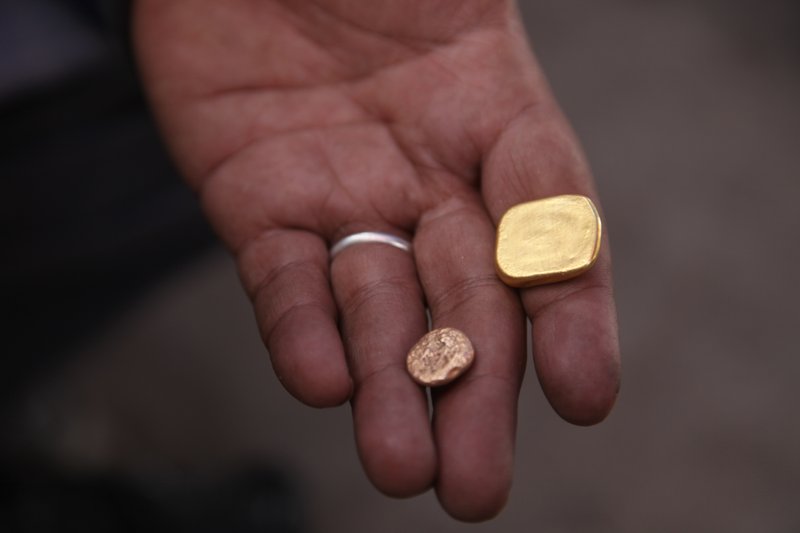 This photo taken on Monday Jan. 22, 2020 shows a gold miner holding gold in Kidal, Mali. A gold rush is underway in northern Mali in an area where al-Qaida-linked militants operate, raising concerns that new profits from the artisanal mining could benefit not only the local economy but also the Islamic extremists. A coalition of armed Tuareg rebels known as the CMA controls the Kidal region and its leaders are the ones overseeing the gold panning activities. (AP Photo/Baba Ahmed)

KIDAL, Mali -- A gold rush is underway in an area of northern Mali where al-Qaida-linked fighters are active, raising concerns that profits from artisanal mining could benefit not only the local economy but also Islamic extremists.

A coalition of armed Tuareg rebels known as the CMA controls the Kidal region and its leaders oversee the gold-panning activities. Some CMA members are believed to have close ties to the local al-Qaida affiliate known as JNIM, which is considered the most active of the extremist groups in the West African nation where deadly attacks against the military and communities have soared.

"It cannot be excluded that individuals belonging to terrorist groups -- in this case the JNIM -- in the area play a role not only in securing the sites but in the collection of taxes, too," said Ibrahim Maiga, a researcher with the Institute for Security Studies in Mali's capital, Bamako.

CMA officials declined to talk about the presence of al-Qaida-linked fighters in their ranks. Residents were fearful of discussing it, saying the extremist group has intelligence agents everywhere in town.

A United Nations panel of experts' report in August found that the CMA was receiving income from checkpoints and taxation related to the gold rush but that several mining operators had "yet to comply with regulations." It said the gold rush began "initially in almost complete anarchy."

The report said experts had been gathering "evidence of collusion between individual members of compliant armed groups and terrorist armed groups." The CMA is considered a compliant group because it signed a peace accord with Mali's government in 2015. Many difficulties have faced the agreement's implementation.

Ties between Tuareg rebels and Islamic extremists are complex and evolving. The rebels have long sought to create an independent state known as Azawad, and some signed on to the agreement with the government. Others, including former Tuareg rebel leader Iyad Ag Ghaly, have gone the way of extremism, starting a group known as Ansar Dine and later joining forces with others to form JNIM.

The gold panning began in Kidal in 2016, not long after the CMA signed the peace accord. About 1,000 people are currently panning for gold, according to Attayoub Ag Battaye, who leads a local non-governmental organization. In addition to Malians, there are also believed to be workers from Niger, Chad, Sudan and Algeria.

The gold can go for up to $2.19 a karat in Bamako, providing an economic lifeline for a region whose economy has been decimated by conflict dating back to 2011 -- before a coup that allowed the extremists to seize control.