Building progresses, about 85% complete on new library in Pine Bluff 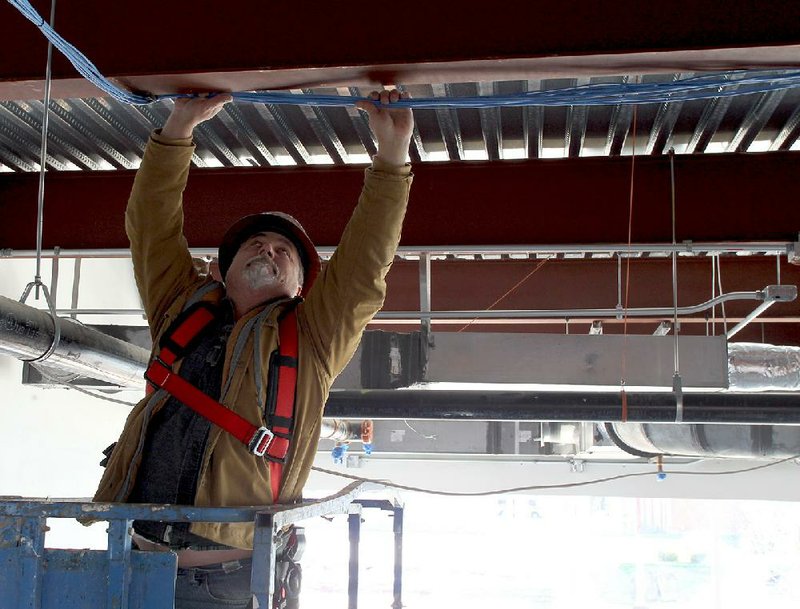 Ray Bell of Cabot, an installer with Advanced Cabling of Little Rock, checks the installation of a portion of the more than 70,000 feet of computer wiring being installed in the new Pine Bluff main library building. More photos at arkansasonline.com/216library/. (Arkansas Democrat-Gazette/Dale Ellis)

PINE BLUFF -- As the crown jewel of the Pine Bluff/Jefferson County Library System nears completion, workers under the direction of East Harding Construction are busy pulling together all of the design elements of the $10.5 million, 35,000-square-foot complex, which officials plan to open in May.

Although the project is about 85% complete, the area is still very much a construction zone, with unfinished surfaces everywhere, the building still partially opened to the elements, wooden planks and metal catwalks forming walkways over a lot that is mostly mud, and construction materials sitting at the ready.

Workers from more than a dozen subcontractors, most of them local and/or minority-owned, in hard hats and steel-toed boots, scurry throughout the project, focusing on more than a dozen different areas of the building.

"The building is mostly in the dry now, which really helps," said Senior Superintendent Patrick Booth of East Harding Construction.

[Video not showing up above? Click here to watch » https://www.youtube.com/watch?v=Fdcy5qw8yyg]

By the time it is finished, Booth said, workers will have installed more than 266 tons of steel, 4.6 tons of roof joists, more than 13 miles of computer wiring, as well as about 3 miles of ¾-inch and ½-inch conduit.

Reese Rowland, an architect with the Little Rock firm of Polk Stanley Wilcox Architects, said the design of the library is intended to draw people in, and he hopes it is an indication that the downtown area is making a comeback.

"I think of the public library as a living room of a community," Rowland said in an email. "Powerful architecture can be a catalyst for change."

Fred Reed, of the Reed Architectural Firm in Pine Bluff, which has partnered with Polk Stanley Wilcox on the Pine Bluff library project, said his involvement with the project has been ongoing for about seven years, from the time the city first began exploring the need to either renovate or replace the current library.

"We were looking at the existing library and evaluating it," Reed said. "Then the decision was made to build a new library as we went through that process. One thing we considered is the existing library is a part of the Civic Center, a complex of several buildings, and identity-wise, it was kind of hard to identify that the library was there. This gives us a separate identity."

Van Tilbury, president and chief executive officer of East Harding, said the company, which was founded in 1974 in Little Rock by Bob East and Tom Harding, has had a presence in Pine Bluff for 18 years. In addition to the Pine Bluff/Jefferson County Library System project, the firm serves as construction manager for projects in the Dollarway, Watson Chapel and Pine Bluff school districts, among other projects.

"We strive to support and stimulate the local economy by using as many local subcontractors and suppliers as possible to help keep money in the local economy," Tilbury said. "This helps keep local, small businesses strong and provides job security for Arkansans."

Tilbury said the company, in addition to its focus on hiring local, has a robust Minority Business Enterprise program that focuses on building capacity for Arkansas-based, minority-owned companies working in the commercial construction industry.

On the Pine Bluff main library project, he said, the company has issued 36 total subcontracts with 16 of those contracts, or 44%, going to local and minority-owned businesses.

"By doing this," he said, "we're building capacity and keeping the money circulating within the local community, which is good for everybody."

Once completed, library officials plan for the facility to be a big draw in the community, with something for just about everyone. Among the amenities planned are a training lab with 12 all new iMac computers and a 90-inch screen, two recording studios, a teaching kitchen, study areas, a family computer area, a teen mezzanine, a children's area, a genealogy room, a boardroom and, of course, books.

"It will have many books," said library director Bobbie Morgan. "We'll still have a lot of the physical books, but we've also got e-books now so that once you come in and you have your library card, you don't really have to come back in. We want you to, but you can download books onto your readers, your Kindles, your iPads, and things like that, and they're never overdue."

Morgan said e-books, just like physical books, are checked out for two weeks at a time, but the e-book is retrieved from the device when it is due, eliminating worry about lost books or overdue fines.

For checking out digital content, Morgan said the library will use the Hoopla app, a digital media lending service powered by local libraries worldwide. Users sign up with an email address, password and library card information, and Hoopla gives them access to their local library's collection of digital titles. Users can then borrow a limited number of titles per month.

"It has movies, TV shows, comic books, music, magazines, and all of those you can do from the comfort of your home," she said, with every library patron able to check out four titles per month via the Hoopla app. "We hope to eventually be able to increase that."

Morgan and Ricky Williams, the assistant library director, said the new library will be a place for education, enrichment and entertainment.

"We have two music studios where people can come record, and then they can go to the training lab where we've got the software they can use to tweak their music," Williams said. "You can edit videos, do podcasts, things like that. The teenagers can come in and play video games, have tournaments, and they'll even have their own space on the third floor, the Teen Mezzanine, where they can talk, study, get loud, or whatever."

Morgan pointed out that security has been enhanced through the use of RFID technology, which will speed up the checkout process, enabling self-checkout while preventing items from leaving the library that haven't been properly checked out.

Also, she said, the building will be equipped with security cameras throughout, which will allow the library staff to monitor what is happening in the building.

"When the kids go up to the Teen Mezzanine, which is just for the teenagers, we want them to have fun," Morgan said with a smile. "Just not too much fun."