Cider-maker pulling out the stops 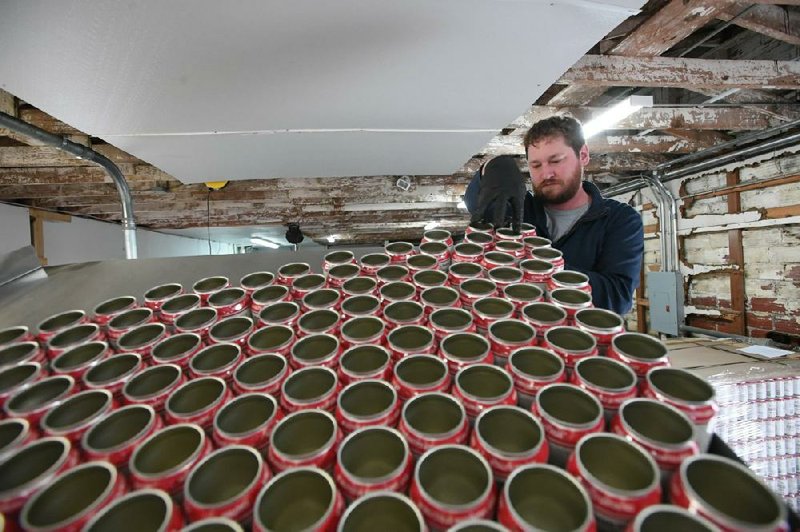 SPRINGDALE — Cider-maker Black Apple will be offering its canned hard ciders all around the state come April.

Black Apple produces a variety of hard ciders and began offering its products in bars and restaurants in Central Arkansas on tap about a year ago. Customer demand was strong, and the addition of a canning line made expansion statewide viable.

Trey Holt, Leo Orpin and John Handley founded the cidery in 2014. Orpin and Holt are co-CEOs and are responsible for much of the day-to-day operation of Black Apple. The cider company opened its taproom and production facility in downtown Springdale on Emma Street in 2015.

Black Apple is hustling to meet demand for its cider, Orpin said. In 2019, Black Apple made 55,000 gallons of cider, and he predicts it will produce 75,000 gallons in 2020. The cider will be distributed statewide by C&M Sales, a division of Little Rock-based Central & Moon Distributors.

Holt and Orpin said Black Apple looks to source its ingredients locally whenever possible, and that meshes well with the company’s focus on keeping its products free of preservatives and other additives. The company fuses European ciders with flavors unique to Arkansas.

“We let the ingredients do the talking,” Holt said.

The statewide launch of Black Apple’s canned products includes its hibiscus cider, semi-sweet cider and seasonal offerings, including blueberry, cucumber mint and strawberry ciders. The company’s canned cider was sold in Northwest Arkansas in early 2019, and its cider is now available on tap in 300 bars and restaurants in the state.

According to “Cider Production in the U.S.,” a report by research company IBIS World released in December of 2018, the industry saw $510.5 million in revenue, with profit of $23.5 million for 2018. It experienced annual growth of nearly 20% in the five years previous. Hard apple cider made up 67% of production in 2018, with 27% made up of “other fruit” cider and 6% non-alcoholic cider.

The report notes that growth over the past five yeas was volatile and driven initially by big brands like Angry Orchard, which introduced many consumers to alcoholic cider, but then consumers sought out smaller, craft brands. Over the next five years the industry is expected to see growth of 2% a year to $563.3 million.

“New operators are still expected to enter the industry, introducing new flavored varieties of cider made from different fruits; however, they are not projected to do so at the monstrous rates of the previous five-year period, as consumers no longer view cider as a new fad,” the report notes. “Moreover, big-name brands, such as Angry Orchard, are projected to shrink as a share of the industry, as craft cider producers increase in popularity.”

Marcus Robert, a board member of the American Cider Association, as well as an orchard manager and cider-maker, said data for 2019 shows that production was flat for the year and that production is indeed shifting away from larger cider companies to smaller, regional cider operations. He said unlike craft beer that saw rapid but steady growth over the decades, cider saw skyrocketing growth from 2012 onward that is just now beginning to stabilize.

He said Black Apple’s steady, controlled growth, first establishing itself locally, then in the central part of the state and then moving to statewide distribution, was a wise strategy. He said many small cider operations try to grow too quickly and end up drained of capital.

“They’ve done it the right way,” Robert said of Black Apple. “They conquered their own territory first.”

Black Apple has plans to expand its production moving forward to keep up with the demand it’s experiencing, Holt said. Once it established itself though its statewide distribution network, Orpin said, Black Apple will push out regionally into neighboring states like Missouri and Oklahoma, focusing on major cities.