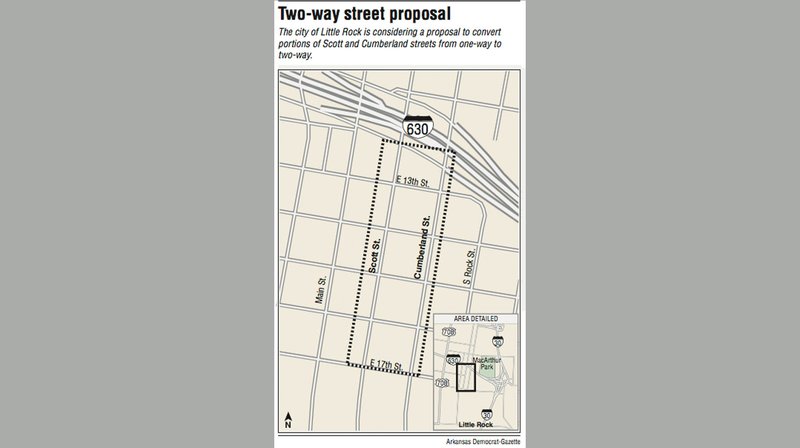 Little Rock is considering a proposal that some believe would help make part of the South Main neighborhood safer for pedestrians and cyclists.

A public meeting is scheduled for Thursday to discuss a preliminary plan that would convert portions of Scott and Cumberland streets from Interstate 630 to 17th Street from one-way to two-way traffic. The meeting will be at 5:30 p.m. at the Downtown Little Rock Partnership office at 101 E. Capitol Ave.

Ronny Loe, assistant director of the Public Works Department, said the city received a request to look at the idea from the Downtown Little Rock Partnership. Loe said city officials plan to listen and respond to what neighborhood residents want.

Gabe Holmstrom, executive director of the Downtown Little Rock Partnership, said he got the idea from the book Walkable City Rules: 101 Steps to Making Better Places by Jeff Speck. He said the idea struck him as an easy way -- with minimal costs -- to slow down drivers and increase accessibility, which would encourage more people to walk in the area.

"If you don't have to worry about traffic coming the other way, then I think people will tend to go a lot faster," Holmstrom said.

He added that he looked forward to hearing more from residents at this week's meeting and would be open to having the change made temporarily.

"The one thing that I do know is that continuing to do something because that's the way it's been is not always the best policy option," he said.

Loe said recent traffic counts on the two streets indicate that a two-way conversion would not pose any major traffic problems.

Traffic counts from December show that the average number of vehicles per day on each section was 772 northbound on Scott Street and 698 southbound on Cumberland Street.

"The car count on those streets is not real high," he said. "It's not a traffic issue, but it is a neighborhood issue."

Loe said it would be relatively inexpensive to make the change since those two sections do not have stoplights, so it would require only additional road striping and signage.

Lindsey Boerner, interim executive director of the SoMa 501 nonprofit, agreed that two-way streets could help slow traffic in the area, but added that she had heard concerns from residents about on-street parking as well as the width of the streets.

She said she believes all streets are the proper width for two-way traffic, but they have people parking on both sides of the street.

"I think maybe some of the stretches were intended to have one side on-street parking," Boerner said.

The area has made some advances in walkability in recent years, Boerner said. She said there was a large drop in accidents involving pedestrians after a project converted Main Street from four lanes to three, with one lane serving as a turn lane, and added bike lanes on both sides. She said it helped slow motorists, though most people don't abide by the 25 mph speed limit.