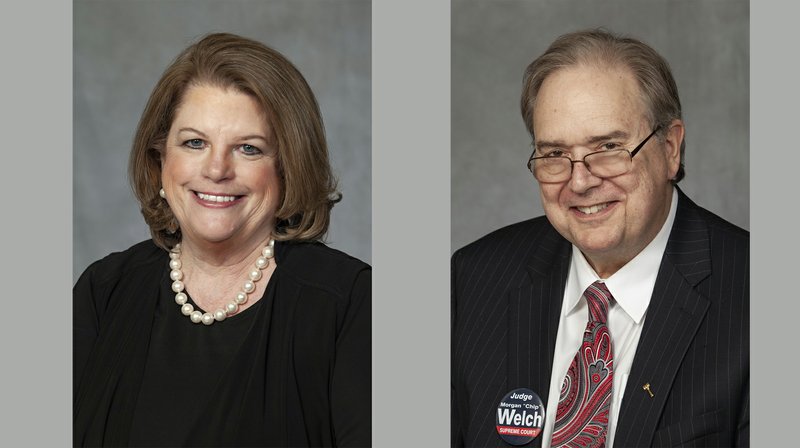 An election for an open seat on the Arkansas Supreme Court begins this week without a familiar backdrop for voters: partisan attack ads ripping candidates in the nonpartisan election.

In each of the past two election cycles, conservative groups based in Washington, D.C., have spent millions of dollars supporting some candidates for Arkansas' highest court.

But the candidates themselves, Circuit Judge Morgan "Chip" Welch and Barbara Webb, chief administrative law judge for the state Workers' Compensation Commission, have relied more on the traditional circuit of small speaking engagements to make their nonpartisan pitches to potential supporters.

On the stump, both candidates describe themselves as "strict constitutionalists" whose judicial philosophies align with those of conservative members of the U.S. Supreme Court. (Asked to pick a judicial doppelganger, Welch named Chief Justice John Roberts, while Webb picked Justice Neil Gorsuch.)

At one such event in early February, a forum hosted by the Arkansas Bar Association in Little Rock, both candidates mostly stuck to summarizing their own legal resumes, while barely addressing the qualifications of their opponent.

That's not to say the candidates themselves don't foresee the potential for outside groups to get involved and shake up the race.

"I don't know what else is going to come but there might be some things that come in the next few weeks," Webb told reporters after her speech, adding, "That is not something that I control."

"I think somewhere around 11 days from now, we'll see 'dark money,'" Welch told reporters in early February. "It won't be mine. I don't have dark money friends."

Dark money refers to groups that aren't required to disclose their contributors and spend their funds either for or against some political candidates and issues.

So far, Welch's prediction has not come true. However, stirrings of outside interest in Arkansas judicial races began to appear last week.

On Wednesday, the Republican State Leadership Committee's Judicial Fairness Initiative -- a group that backed Davis Sterling in his unsuccessful challenge to Justice Courtney Hudson in 2018 -- filed new registration paperwork with the secretary of state's office for the 2020 election cycle. (The committee discloses its donors, and is not considered a "dark money" group.)

The group has yet to report spending any money in Arkansas. Its registered agent in Arkansas did not return messages seeking comment.

A purchase of statewide TV or radio ads at this point would come just weeks before Arkansas' judicial and partisan primary elections, which are March 3. Early voting in that election begins Tuesday.

Webb and Welch are vying for the only open seat on the seven-member Supreme Court this year. The seat is now held by Justice Josephine "Jo" Hart, who decided to retire rather than run for reelection.

Welch opened his campaign a month before Webb did in November, giving him a head start on fundraising. Neither candidate has reported having enough money for three-figure ad purchases across the state; however, Welch began purchasing some television ads Friday in the Little Rock market

Since announcing her campaign, Webb has faced the accusations of overt partisanship over the role of her husband, Doyle Webb, as chairman of the Arkansas Republican Party. She has responded by pointing to her own record as a prosecutor and judge, telling the audience at the Bar Association meeting this month, "I am much more than just my husband's wife."

Webb also has defended her independence in response to a leaked invitation for a state Chamber of Commerce fundraiser, which suggested that electing Webb would serve as a "cheaper option" to getting tort reform legislation passed. Webb also has been publicly endorsed by prominent Republicans, including U.S. Sen. Tom Cotton, R-Ark.

Welch said he has never suggested otherwise, and praised Webb's public service as an administrative law judge on the Workers' Compensation Commission. When questioned about his own family's political ties -- his daughter Ashley Hudson is running for the state House of Representatives as a Democrat -- Welch has responded that his other child, son Rick, is a Republican.

"There is no case that anybody in this election has referred to in my seven years on the bench when somebody didn't get a fair trial," Welch said.

Welch, 69, was first elected to the bench in Pulaski County in 2012. Before that, Welch was a private-practice attorney and was president of the Arkansas Trial Lawyers Association in 1990.

Because of his elected position, he has the advantage of appearing on the ballot with the title "judge" in front of his name.

Webb, 62, worked for more than 12 years at the Workers' Compensation Commission, before her service there was interrupted by a temporary appointment to fill a circuit judge post in Saline County in 2017. She returned to the commission in early 2019 to serve as the chief administrative law judge.

Her past electoral experience included serving as the prosecutor for Saline County for three terms from 1997 to 2002. Her tenure as prosecutor followed that of Dan Harmon, who was later sentenced to federal prison on corruption charges. On the campaign trail, Webb has taken credit for a "cleanup" of the office, a claim to which Welch has taken exception.

"I did not prosecute Dan Harmon, but neither did Barbara," Welch told the Bar Association. "She took over after he was arrested."

In a response to that comment, Webb told the Democrat-Gazette that she had assisted federal authorities investigating Harmon's case and that her work as a prosecutor also involved pursuing drug cases and other crimes that she said went unpunished under Harmon. "I cleaned up the 4,000 cases that he left that had not gone prosecuted," she said.

Welch said that while he was in private practice before 2012, he worked on jury trials in both civil and criminal cases. On the 6th Judicial Circuit Court, Welch's caseload is split between civil, domestic relations and probate cases.

Both candidates are graduates of the William H. Bowen School of Law at the University of Arkansas at Little Rock.