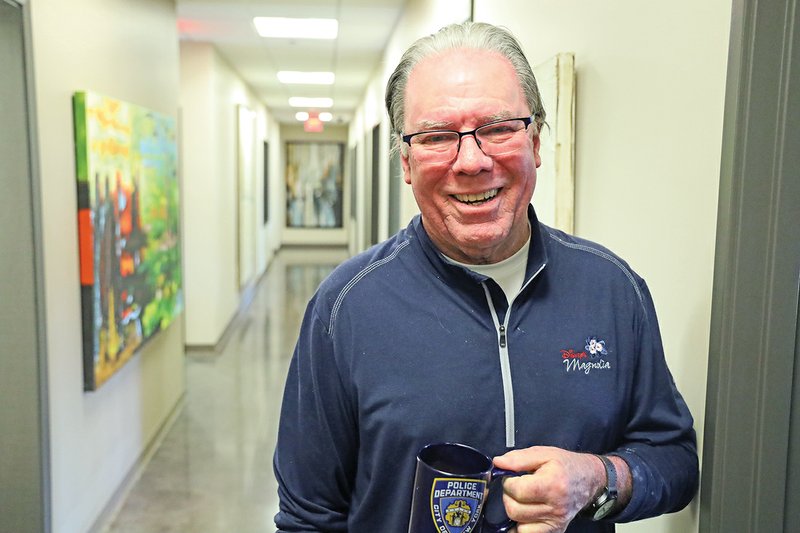 Sam Williams takes a coffee break at City of Faith halfway house. The former Maumelle police chief lasted four months in retirement before getting back into the workforce.

MAUMELLE — Over the course of 40 years, Sam Williams lived his dream of being in law enforcement, nearly half of them as chief of police in Maumelle. When that all came to an end last fall with the lifelong cop stepping into retirement, he shut off his phone and looked ahead to unlimited time on the golf course.

For a man whose career included working the narcotics division, training policemen in war-torn Baghdad and generally chasing bad guys for four decades, it seemed like a perfect Hollywood ending.

The Maumelle Chamber of Commerce presented him with its 2020 Person of the Year Award on Jan 16 as a farewell token of the chamber’s esteem. By that time, however, Williams was already done with retirement, an exercise that lasted about four months.

“I left about Sept. 2 and played a lot of golf and enjoyed it,” he said. “The weather would get a little bad, and you couldn’t play, and I got to thinking, ‘Well, I’m about to get bored.’ I wasn’t bored yet, but I could see boredom coming.

“My wife was trying to find some help over here in security, and we’re talking, and I say, ‘Well, Terry, you’re looking for help, and I am looking for something to do. Maybe we’re sitting here staring at each other with the solution.’”

Terry Williams, executive director of Little Rock halfway house City of Faith, took the idea to her team, and Sam was encouraged to apply. He interviewed for and landed the security job, to which he now reports five days a week. The feeling of going from leading a police department of nearly 50 to a job with no title, no managerial responsibilities and ultimately reporting to his better half still tickles him, he said.

“Two of my daughters, when we first started talking about this, both said, ‘This is a horrible idea,’” he said, amid his trademark guffaw.

There was a period in his career when he was liable to come face to face at the halfway house with someone he’d personally sent to prison, he said, which might have given him pause for taking the job. But by now, that’s a next-to-nothing chance, and he’s seen as just another new guy trying to connect the dots of his day-to-day responsibilities. It’s a transition that’s brought its moments of self-reflection, he said.

“Let’s face it; I, by some measure, was successful and had risen to the higher level of my profession,” Williams said. “Then you’re starting all over again. You’re starting at the very bottom, and that’s how you’ve got to approach it. If you hit the door thinking you know everything about everybody, you’re not going to succeed.

“When you’re in my position, you’re having to ask every day a hundred questions about what you do and how you do it. The people I’m working with are just great. They’re extremely helpful.”

Williams may see himself as just another rookie, but his co-workers have said the organization has already benefited from his extensive experience.

“[Sam] brings 40 years of law enforcement experience, and probably 20 to 30 of that is leadership,” said Allen Winkler, City of Faith program manager. “Our chief of security was very excited to have him come on because when you’re staring at the same thing over and over again, you stop seeing the flaws. That’s kind of where we were. We needed an outside perspective, and I think Sam brought that.

“Already, he’s said, ‘Hey, I see some things y’all probably can’t see anymore.’ I’m real big on, if you’re just going to tell me the problem and not help me come up with a solution, what good are you? But Sam says, ‘Here’s your problem, and here’s my recommended solution.’ It was great.”

As Williams likes to tell it, there was a time when not much separated his path from that of the people he now helps transition back into society. After graduating from Little Rock Central High School, he struggled to find direction, dropping out of college to work at a local drug store and cause petty mischief. One day, he found out he wasn’t nearly as clever about it as he thought.

“One of the officers who worked that area came and talked to me one day and said he was tired of hearing my name being bandied about,” Williams said. “He said, ‘You need to go get on the police department because you’re either going to be riding in one of those cars, or you’re going to be in the back seat of one.’

“That got me thinking. I didn’t know I was making that much noise, but I was. So I thought I’d get on the police department and lay low for a while.”

Turns out, Williams had unexpectedly found his life’s calling. He gravitated to the vice squad, which included drug enforcement, and steadily climbed his way up the departmental ladder. It wasn’t always pleasant — he blames his all-consuming work habits for the failings of his first marriage — but it was clear he was doing what he was meant to do.

When he landed in Maumelle as chief of police in 2000, he got the chance to build a department virtually from the ground up. Naturally outgoing and gregarious, his stature in the community grew with every cause and charity he got involved with, which were many.

“If you’ve ever had a chance to meet Sam, it goes without saying: He’s just such a personal person,” said Alicia Gillen, executive director of the Maumelle Chamber of Commerce. “The work that he did went far beyond the walls of that police department and spoke to the residents of this community. His outreach and involvement in every aspect of our city has been felt for many years and will continue to be felt.”

Gillen said the chamber’s award is particularly telling of the high regard in which Williams is widely held, because the winner is determined by a vote of the full chamber membership.

“[Sam’s] been such a part of the fabric of our community; there really isn’t anything he doesn’t do,” Gillen said. “He was even the emcee at the Rotary Club dog show last year. It doesn’t matter what organization it is. He’s always involved and always there to offer his support. That’s really why he’s the Person of the Year.”

As for his new gig, Williams said, he’s happy to have something constructive to do, something that continues in the line of public service that he’s walked for so long. And at 65, he said, he brings a perspective to the role that might have eluded him earlier in life.

“I heard a great saying the other day: ‘The only time you ever look down on somebody ought to be to brag about their shoes.’”

Hearing the positive feedback from his new co-workers, the players in his life’s second act, Williams waved his hand as if to physically deflect such praise back where it came from.

“I hope in 40-some-odd years of law enforcement that I have gotten some marketable skills and discipline, just learning what we all should have learned a thousand years ago, to treat people with dignity and respect,” he said. “Criticizing anybody for past mistakes isn’t going to get you anywhere. You’re just dwelling on past mistakes, and it’s really hard to move forward if that’s where you’ve stopped.”