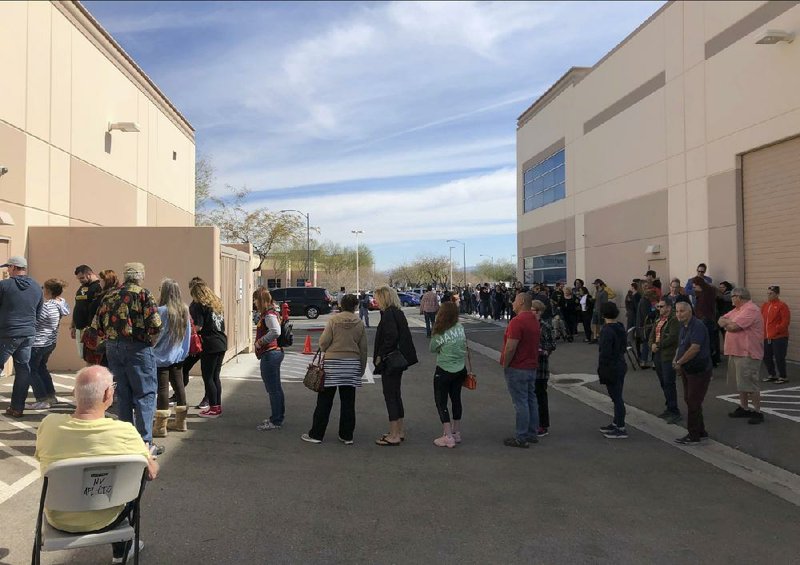 Democratic caucus-goers wait in line for more than an hour Saturday in an early caucus ballot precinct site at an AFL-CIO union office in Henderson, Nev. More photos at arkansasonline.com/216nevada/. (AP/Ken Ritter)

LAS VEGAS -- As the Democratic presidential race hurtles toward Nevada, the state has no obvious front-runner, though Vermont Sen. Bernie Sanders heads into the contest on strong footing.

The open race has every Democrat spending much of the next week looking for votes in the state's working-class neighborhoods, union halls, casino convention halls and suburbs.

This year, with the results of Iowa's caucuses muddled by technology and reporting problems, Nevada is under pressure to pull off a problem-free caucus. The Nevada State Democratic Party abandoned its original plans to use an app like the one that caused trouble in Iowa and has scrambled to come up with a new system to tabulate results.

The state party said last week that it will try to use simpler technology and a backup paper record, though election experts have warned that deploying new technology and processes without sufficient training can cause problems.

The party has been fortified over the years by former Senate Majority Leader Harry Reid. Many of his former staffers hold key roles on the presidential campaigns.

The 80-year-old former U.S. senator from Nevada, who retired in 2016 and has been battling cancer, has repeatedly said he won't endorse anyone before Nevada's caucuses. His decision not to back a candidate in the still-volatile field has been echoed by many of Nevada's top elected officials, including the governor, two Democratic senators and two of three Democratic members of the House.

The state's most powerful union also decided not to endorse anyone. The 60,000-member casino workers' Culinary Union announced Thursday that it would work instead to get out the vote and defeat President Donald Trump in 2020.

While no candidate has earned its backing, the union hasn't been shy about discouraging support for Sanders and Massachusetts Sen. Elizabeth Warren, whose "Medicare For All" plans would move to a government-run insurance system. The union, which prizes the health care plans its members bargained hard for over the years, said its insurance would be doomed under Medicare for All.

Early on in the race, former Vice President Joe Biden seemed to have an advantage in Nevada, with early support in Nevada's communities of color and long ties to the state. He topped polls into early 2020, but Nevada polling has been scarce since voting in the race began.

"This is his chance to shine. He's put together a broad cross section of voters who support him," said Rep. Dina Titus, who represents Las Vegas and has endorsed Biden.

"I'm seeing less than I thought I would see from Biden," he said. "I just assumed I'd see more."

And while many candidates have reached out to Nevada's Hispanics, who make up 29% of the state's population, Sanders has reached deep into Hispanic neighborhoods. He also has support in northern Nevada, and on college and university campuses.

"I talk to a lot of people who are just flat undecided at this point," Cole said.

Buttigieg didn't start building up his team in Nevada until August but has worked to catch up. He now has the second-biggest campaign in the state after Sanders.

Minnesota Sen. Amy Klobuchar is still largely unknown in Nevada but has tried to build up a staff.

She held a late-night town hall session at a downtown Las Vegas movie theater Thursday night, telling several hundred attendees that people have counted her out, but she's kept working.

The other billionaire in the race, former New York City Mayor Mike Bloomberg, failed to file in time for Nevada's caucuses and isn't eligible to receive votes there.

Information for this article was contributed by Sara Burnett of The Associated Press. 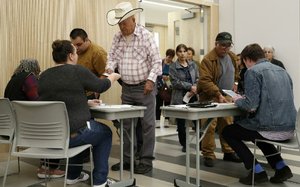 People line up Saturday at an early voting site in Las Vegas for the state’s Democratic presidential primary. No candidate is a strong front-runner in the state, and the open race has hopefuls spending much of the coming week looking for votes in the state’s working-class neighborhoods, union halls, casino convention halls and suburbs. (AP/John Locher)