In California, a sea lion dilemma

Animals stinky, noisy in one spot, popular visitors in another by Louis Sahagun Los Angeles Times | February 16, 2020 at 4:25 a.m. 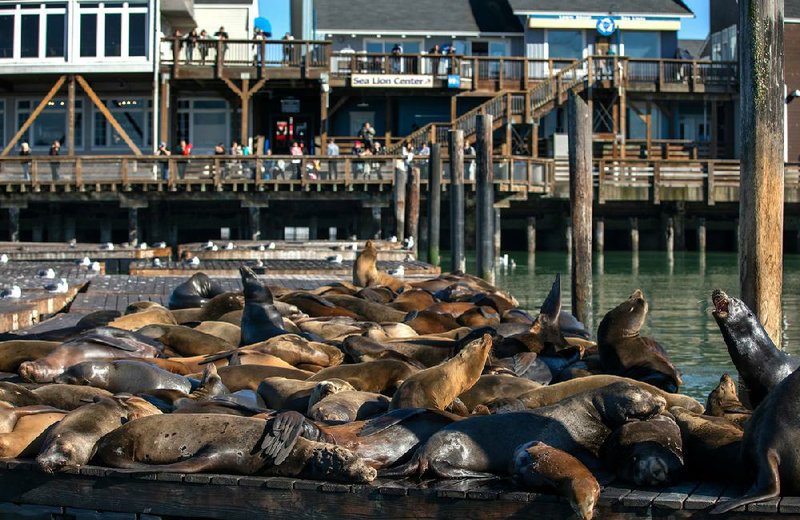 California sea lions, all males, draw an audience in January as they loll about on the dock at Pier 39 in San Francisco. Though popular in the Bay Area, when they head south they are sometimes welcomed with arrows, harpoons, electric cattle prods, gunfire, bombs and fish laced with chemicals. (Los Angeles Times/Mel Melcon)

SAN FRANCISCO -- Sea lions are increasingly living in parallel universes along the California coast, a disparity best observed in the noisy, stinking spectacle that rolls out daily at San Francisco's Pier 39 shopping center.

There, hundreds of these enormous, mostly male California sea lions bark, relieve themselves and regurgitate, but are immensely popular with tourists. As a result, the blubber boys are treated like royalty.

"The sea lions are a godsend: a natural attraction that's phenomenal for business," Sheila Chandor, Pier 39 harbormaster, said on a recent weekday as tourists snapped selfies against a backdrop of sea lions piled up like cordwood on docks.

Elsewhere in California, sea lions are pariahs. The animals that head south for their summer breeding season are sometimes welcomed with arrows, harpoons, electric cattle prods, gunfire, bombs and fish laced with chemicals.

"The general attitude in the fishing community is this: 'Shoot 'em,'" said Paul O'Berry, 31, a commercial squid fisherman based in San Pedro. "But we don't because we'd be hauled to jail for that."

These clashing perceptions overlap in coastal currents where sea lions, once hunted nearly to extinction for their pelts, have flourished under the 1972 Marine Mammal Protection Act. In 1964, the California sea lion population was about 30,000. They now number a tad over 257,000 in an environment that scientists say can only sustain about 300,000.

While San Francisco touts the resilience and popularity of these creatures, harbor communities from Seattle to San Diego decry their voracious appetites and habit of wrenching fish off hooks with the jaw power of several Dobermans.

Let a sea lion get a flipper in the door, marina operators contend, and they'll take over the place.

Officials in Washington, Oregon and Idaho are so irate at marauding sea lions that they have asked for federal permission to shoot certain ones identified as feasting on salmon and steelhead, a prized ocean trout.

In 2013, residents in La Jolla sued to force San Diego to clean up sea lion excrement near their affluent community. The poop mound was blamed for champion boxer Floyd Mayweather's decision that year to abandon after 15 minutes two villas and six rooms he and his entourage had at the La Valencia Hotel.

The sea lions' preference for pungent anchovies "makes the smell much worse than it might otherwise be," argued the lawsuit filed by a group calling itself Citizens for Odor Nuisance Abatement.

But Superior Court Judge Timothy Taylor indicated in his 2015 ruling that the droppings were a fact of nature and not comparable to a broken sewer pipe or overflowing trash dump that the city would have an obligation to fix.

Megan Pagnini, 13, is a survivor of an apparent sea lion assault. On June 14, she was posing for photos in the surf at Pismo Beach when suddenly, "I saw this big brown blob thing on my leg that's attacking me," she told ABC News. "All I could do was scream."

Megan was rushed to a hospital for treatment with antibiotics.

In 2015, in Mission Bay, a few miles south of La Jolla, a 62-year-old man was posing for pictures with a fish he'd caught when a sea lion leaped onto the boat, then dragged him to the bottom of the bay for an estimated 20 seconds. Suffering several bites, the man got away and rose to the surface, where his companions pulled him aboard, lifeguards said.

California Department of Fish and Wildlife officials say attacks like these are extremely rare.

But it hasn't been easy persuading harbor cities to provide sanctuaries for growing numbers of the marine mammals.

Activists are urging Dana Point Harbor Partners, the consortium behind the new $330 million renovation of Dana Point Harbor, to include special sea lion accommodations in their plans for a hotel, restaurants, shops and more than 2,000 boat slips.

But Ralph Grippo, a principal in Bellwether Financial of Newport Beach, a member of the partners group, said that's out of the question.

"We have no intention of building a flotation platform for sea lions to hang out on," he said. "Our goal instead is to find a way to deter these large animals from getting up on boats and docks in a way that protects both property and humans."

After teetering on extinction, the California sea lion has made one of the most impressive recoveries of all marine mammals. It's a rebound that has triggered bitter conflicts among environmentalists, the commercial and sportfishing industry and seaside business owners, with federal and state agencies trying to satisfy all sides.

"With the robust population has come some big management challenges," said Justin Viezbicke, the National Oceanic and Atmospheric Administration's marine mammal stranding coordinator for California. "We're facing extremely strong, mixed feelings about sea lions up and down the coast of California."

Biologists say the future of sea lion conservation may well lie in a better understanding of how their complex family groups, behavior and movements are driven by evolutionary pressure and the availability of prey.

Male sea lions are bigger and need more energy, so they spend a lot of time in more biologically productive, colder northern waters during the winter months, scientists say. Females, which have less blubber and take care of their pups for almost 11 months, tend to stay close to central and southern California.

And therein lies the pickle for one San Diego enclave.

"The situation in La Jolla is a real mess," said Sharon Melin, a biologist with the National Marine Fisheries Service, "because it is pitting female sea lions and pups against people with a lot of power and wealth."

The size of the overall California sea lion population is controlled by the availability of food and oceanic conditions.

They are opportunistic predators that typically feed on mackerel, sardines, rockfish, herring and squid. But their numbers are periodically culled by El Nino-like conditions, a dearth of fish and squid and a naturally occurring neurotoxin called domoic acid, which can trigger strandings and deaths.

Malnourished, stranded and wounded adult sea lions and pups that are rescued, however, have a high rate of survival after they are provided nutrition and hydration at rehabilitation facilities such as the nonprofit Pacific Marine Mammal Center in Laguna Beach.

A month ago, however, the facility euthanized a young female sea lion that had been suffering from pellet gun wounds in the ribs.

The first dozen sea lions emerged at Pier 39 several months after the Bay Area was hit by 1989's devastating Loma Prieta earthquake, which was responsible for 67 deaths and about $7 billion in damage.

Initially, merchants and marina officials regarded the mammals with great long whiskers and big brown eyes as a quirky nuisance. But soon they were joined by hundreds of their brethren, which swarmed the docks, damaged the pier, chased away boat owners and raised a shocking stink.

Suggestions for repelling the invaders included borrowing a mechanical great white shark that had been used in Australia. The robot predator proposal was scrapped when word got out that live sharks had tried to mate with it.

Another brainstorm, quickly dismissed by harbor officials, called for covering sea lion hangouts with broken glass, on the theory that the animals would learn a painful lesson as they slid across the docks.

What happened next was unforeseen -- and remarkable.

Tourists who had avoided the area since the earthquake returned in droves for a glimpse of sea lions. With some business owners reporting sales increases of as much as 40%, dozens of boat slips were relocated in order to make room for them.

Today, visiting sea lions enjoy an easy life at Pier 39, where they bask and bulk up on fish and squid behind the protection of a shark-proof breakwater. The docks are power-washed on a weekly basis. Veterinarians tend to their ailments. A low-voltage electric barrier prevents sea lions from venturing into the waterfront visited by about 15 million people each year.

The nearby Aquarium of the Bay has announced plans to transform into a $260 million, 60,000-square-foot "Ecotarium" featuring a new domed building, submarines on tracks leading into the bay and thousands of exhibits of local species including visiting sea lions.

"We plan to use the sea lions as living symbols of a healthy marine environment," said spokesman Peter Nakamoto.

Among a crowd of people gathered at Pier 39 on a recent weekday to ogle, snap photos and even bark back at the sea lions was Isaac Lomeli, 29, and his partner, Kirsten Mallard, 30, both from Yorba Linda.

"I've been coming here every year since I was 8 years old," Lomeli said. "Dad felt it was a big deal that actual nature had returned in a big way to one of the most heavily industrialized harbors on Earth."

Farther south, San Pedro fisherman O'Berry lamented how sea lions are taking a bite out of his livelihood.

"There are simply too many sea lions out there these days, said O'Berry, adding the creatures have a feeding strategy of "following close behind bait barges and fishing vessels."