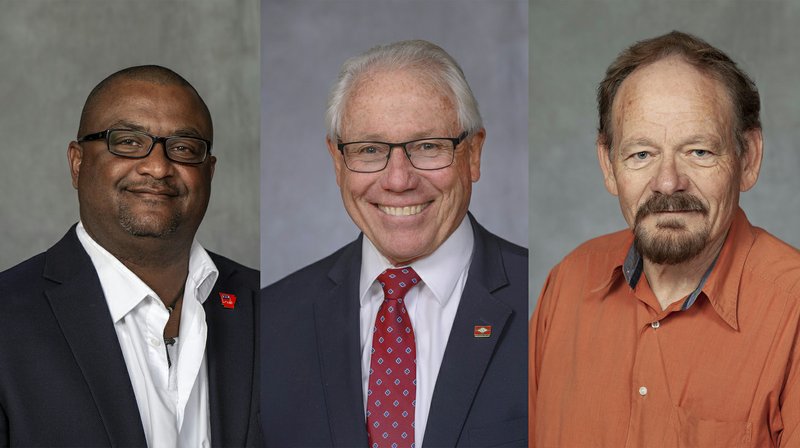 Tuesday will be the first day for early voting in the Republican primary for the state Representative District 74 position. Two challengers who have never run for the position before -- Shawn Bates, 46, and Curtis J. Varnell, 66 -- will face off against incumbent Jon S. Eubanks, 68, who is serving his fifth term in the state House of Representatives. The winner will face Democratic candidate June Anteski in the Nov. 3 general election.

When asked why residents should vote for him in the primary, among the reasons Eubanks gave was that he has the experience of knowing how "the process" works.

"It's everything from knowing how to get the bills drafted to knowing the relationships that you have to be able to develop and build, not only within the House of Representatives, but with the Senate and with the governor's office if you want to be successful in getting legislation passed and enacted," Eubanks said. "Part of that process is knowing who to contact within state agencies in order to help deal with constituent issues."

Eubanks said he is also in his third term as speaker pro-tempore. He believes this status gives District 74 an advantage in that he will have a bigger voice and can better represent his constituents. Eubanks also serves on the House Education Committee, the House State Agencies and Governmental Affairs Committee, the Joint Budget Committee, the House Rules Committee and the Legislative Council Committee.

However, Eubanks' perspective is not shared by his competition.

Varnell, for instance, after being asked the same question, said he strongly believes in term limits, saying that voters will not have to worry about him for more than two terms.

"That's all I believe anybody should run, and the reason being is once you've been in office for a while, you forget that you represent District 74 and you start representing the interest in Little Rock, and I think that's where we're at," Varnell said.

Although he never ran for any position in the past, Bates says that nothing is getting done, District 74 is losing jobs and its roads have not been repaired.

"The poverty level has risen here 15% in the last 10 years, and you know who's been in office then," Bates said.

The District 74 position comes with a term length of two years and a current yearly salary of $42,428.48, according to Cecillea Pond-Mayo, chief information officer for the Arkansas House of Representatives. District 74 is comprised of parts of Franklin, Logan, Sebastian and Scott counties.

Born in Portsmouth, Va., Eubanks said he currently lives in rural Logan County, although he has a Paris mailing address. Outside of his legislative duties, he has owned and operated a farm for 43 years. He graduated from Annapolis High School in Maryland in 1969, and attended Virginia Tech before graduating from Arkansas Tech University with an accounting degree in 1990.

Should he be re-elected, Eubanks said he wants to emphasize continuing to improve the Kindergarten-through-12th grade system in Arkansas, in addition to career education and workforce training.

Tied in with all this, Eubanks said, is continuing to make Arkansas competitive in both the region and the United States. This is being done through the reduction of red tape, or bureaucracy, and continued tax reform. Tax reform is crucial to how and where business and industry decide to locate, Eubanks said, with the number one factor being a skilled workforce.

"The relative tax structure, or tax rate, is also something that is very important in that decision-making process," Eubanks said.

Eubanks said he would also like to focus on infrastructure. This includes highways and broadband internet access, which are both critical to economic development.

A resident of Paris, where he was born, Varnell works as regional science/social studies coordinator for the Guy Fenter Education Service Cooperative. He has been a teacher for 40 years. Varnell graduated from Paris High School in 1971 and went on to obtain a general science and history/political science degree from Arkansas Tech University in 1975, a master's degree in social studies education from Arkansas Tech University in 1982, a specialist degree in science education in 1988, and a doctorate degree in geology from the University of Arkansas, Fayetteville in 2004.

Varnell is also on a number of boards, including those for the Logan County "Old Jail" Museum, the Paris Arts Center and the Logan County Coal Miners Museum. He previously served as an area coordinator for the federal Summer Youth Employment Program for 10 years. He is married to Lacie Varnell and has three children and two step-children.

Varnell described District 74 as being in a "very low-income area" that is economically depressed and losing population. He is interested in revitalizing the community so that the children there do not move away.

"And the biggest way that I see of doing that, 80% of our students do not go to college, and so we need to stress vocational education for our children, and it should be a part of their high schools, especially the last two years of high school," Varnell said.

"Right now, we have a program that we started in Paris that allows welding and nursing. There is one at Magazine for forestry. We would like to see that increased in Booneville to include diesel mechanics, heavy equipment operating, and we think that we can train our kids so they'll have starting jobs at a decent salary and can find jobs in the area and remain here. That would be a big thing."

Other issues Varnell plans to address include a loss of funding that District 74 has encountered with its senior citizen centers and home-care, as well as increased taxes for farmers.

In 2018, the Arkansas Assessment Coordination Department adjusted its recommended rates for the assessments of typical chicken houses from $4.50 per square foot to $9 per square foot, according to previous Arkansas Democrat-Gazette articles. In addition, the state's excise taxes on gasoline and diesel were increased by 3 cents to 24.5 cents a gallon and 6 cents to 28.5 cents per gallon, respectively, starting Oct. 1 as part of Arkansas Act 416 of 2019.

Bates, who was born in Booneville and currently lives in Subiaco, said he works as a general contractor with his own company, Bates Stone Work, which he formed about 15 years ago. He got his start in the stone business by helping his father before graduating from Paris High School in 1992. He has completed some online college classes from Arkansas Tech University.

Bates is married to Missy Bates and has four children.

In regard to the issues in District 74 he plans to address, Bates said the district wants growth.

"Without growth, we're not getting our roads fixed, our teachers are underpaid," Bates said. "We're going to make sure we get some of that money that they're putting on the highways because we're paying taxes here."

Bates said his main priority is to get additional jobs in the district, citing losses of jobs in both Paris and Booneville. He claimed the district would "really like some high-tech jobs," but will take any jobs at the moment.

"I go to so many doors, and I'm knocking on doors, and these ladies that [are] coming to the door telling me how scared they are, thinking they're going to lose their house because they just lost their job last year, and there's no help," Bates said. "They're going to have to get up and move from a place that's a really good place. It's a really good place to live. ... But we need somebody out there fighting for us to get some jobs here because people are scared."

Bates also plans to address a "big" drug problem in District 74, among other issues. He is also a supporter of gun rights, speaking out against so-called red flag laws concerning firearms.

Information for this article was contributred by Hunter Field and Michael R. Wickline of the Arkansas Democrat-Gazette. 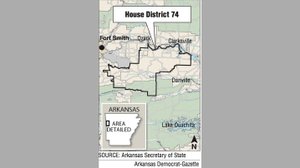 A map showing the location of House District 74