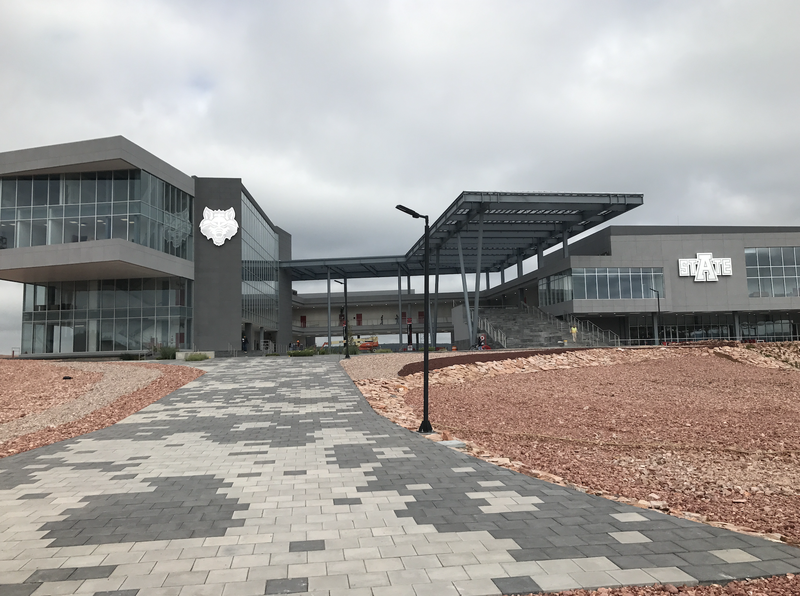 Now in its third year, the Arkansas State University-branded campus in Mexico has fallen far short of its enrollment forecasts, diminishing returns for its Jonesboro sponsor, records show.

A former professional race-car driver runs the private university in a rural part of the Mexican state Queretaro, about a three-hour drive from Mexico City. ASU has lent its brand, curriculum, academic expertise and degrees in exchange for annual "commission" payments tied to the school's enrollment.

Underwhelming enrollment has cut into the payoff. ASU so far has collected about one-fifth of what it first anticipated and has downgraded what it expects to receive through 2022 by $3.9 million, or 83%.

Although the private university's financial health is kept under wraps -- ASU officials have not seen bottom-line numbers, they said -- signs of financial stress have emerged at "Campus Queretaro," which does not receive any ASU support nor funding from the U.S. or Mexico governments.

A student multipurpose building designed to include the library is unfinished. Advanced-course laboratory space has not yet been built. And struggles with construction contractors -- who have staged public protests alleging unpaid wages -- have dogged the university.

ASU leaders, during an hourlong interview, stood by the arrangement with Campus Queretaro. Initial projections were overly ambitious, they said. Student admissions, which are growing year after year, outpace some of their peers' forays into foreign countries.

The campus build-out, although not complete, is scheduled to coincide with students as they progress into advanced-level coursework and will ramp up as enrollment increases, they said.

Officials also expressed confidence that the campus boss, businessman Ricardo Gonzalez, has the financial might, incentive and desire to make the project succeed.

"The university itself was one piece of a much larger business strategy by this developer," ASU System President Chuck Welch said of Gonzalez.

"He bought thousands of acres of land [around the university]," Welch said, likening the idea to the Chenal development in west Little Rock. "The university is a centerpiece of that, but there will be multiple other developments that are part of that, that over the long term will have much more benefit for him -- both financially and, I think, it will benefit the university as well."

Gonzalez did not respond to an emailed interview request.

"For the most part, these endeavors tend to not be as lucrative as what campuses think they will be," Lane said.

But those numbers were tied to projections that officials now acknowledge were too rosy.

To date, ASU has collected just $35,000 in one commission payment, for the school year that ended last summer. Originally, the first payment was estimated at $150,000.

A document provided to the Arkansas Democrat-Gazette by ASU System spokesman Jeff Hankins shows new projections through 2022. That sum is now $786,000, or 17% of the initial expectation for that time frame.

ASU hasn't factored these payments into its budget, Welch said, so the system's spending plans don't have holes that need to be filled. ASU hasn't invested any money into the campus and isn't on the hook for any day-to-day costs, Hankins said.

The key driver of the reduced payments is lagging enrollment. The agreement between ASU and the private university anticipated 1,100 students in year one and 1,600 in year three. Actual numbers were 209 and 518, respectively.

The concept of foreign branch campuses has increased in recent decades. More than 250 now operate across the globe, said Lane, the education professor who studies such partnerships.

But the challenges each campus faces upon opening are often the same year after year, including selling the idea to trustees in the United States using projections of more students and more money than typically pan out.

That's partly because of excessive enrollment expectations and because of costs not recognized early on, Lane said.

Still, he said, more than 500 students in year three is "pretty good."

ASU pointed to lower-than-projected enrollment at other international campuses just starting up, such as Texas Tech University's campus in Costa Rica. That campus has 62 students in its second year after projecting 200 in its first year.

Recruiting the first year was difficult, ASU officials said. Prospective students sometimes had to wear hard-hats when visiting the campus previous to it opening in 2017, and the faculty was not yet in place, ASU Chancellor Kelly Damphousse said.

"I think we didn't anticipate how difficult it would be to attract students to an unfinished campus," he said. "So that really hurt us at the beginning."

A student at Campus Queretaro will pay roughly $10,350 a year in tuition for two, 15-credit-hour semesters, according to costs posted online.

That makes it one of the more expensive universities in Mexico, according to reports from Quacquarelli Symonds, an education company that does annual global university rankings.

Public universities, according to the company, can cost less than $1,000 annually. The Mexican median household income is a small fraction of what it is in the United States, according to a 2010 Higher Education Strategy Associates report.

"It's a gamble for a student to attend a branch campus in its first year," Lane said.

To help a campus succeed, leaders need to bridge cultural gaps and integrate the university into the area's culture, he said.

Part of that is through persuasion, such as convincing locals of the value of on-campus living in a nation where that isn't normal. Part of that is by offering degree programs, course offerings and syllabuses that meet the area's needs.

ASU-Campus Queretaro was envisioned as a STEM-focused school, where students would be able to get internships in science, technology, engineering and math jobs at multinational companies in the area, such as General Motors or General Electric, said Thilla Sivakumaran, who was formally announced as the campus's interim vice rector last week.

Students could even complete some of their laboratory requirements at those companies, if those companies chose to provide that opportunity, he said.

Although ASU officials said they are in the dark when it comes to the Mexican university's financial health, they are confident that the academic mission is adequately funded.

An Arkansas Freedom of Information Act request for the private campus's operating budgets since 2017 turned up no documents.

"We have no final or official budgets from the ASU CQorganization and haven't requested any because we haven't believed having the documents to be necessary at this time," Hankins said, using the acronym for the Mexican campus.

The 2017 agreement between ASU and the private university states that both parties "shall approve in writing" an annual operating budget that accounts for "all sources of revenue," as well as all education-related spending and the university's "operational and construction obligations."

Power to review the budget falls to Welch, as the system president, or whomever he designates in his place. Welch said he designated the campus's vice rector and ASU-Jonesboro's chancellor Damphousse.

Damphousse and Sivakumaran have reviewed only the academic side of the operating budget, so they don't know the campus's full financial picture, they said.

"We go through the budget," he said. "It's focused almost exclusively on salaries for faculty, programming for the labs, staffing for student affairs and the resident halls. We review the budget. I just don't walk away with a budget in my hand."

ASU would also share in any profits the university generates in excess of $15 million. Officials know that the private university hasn't eclipsed that number but said they weren't sure whether the campus is profitable.

"It's not our job to speculate or know the finances of a private institution in Mexico," Hankins said.

ASU officials trust Gonzalez, who they note made a huge contribution with the $100 million he's invested in the school, more than most schools can say they've received in a single, nonathletic donation. Gonzalez has business in his blood, they said.

"If they start telling us we can't provide you with what you need, then I'm going to have a concern," Welch said. "That's never been the case, and we have no reason to believe there is any concern."

ASU-Campus Queretaro provides access to an American-style education to Mexicans who can't afford to send their children to the U.S. for studies, Sivakumaran said.

"While this has been a challenging few years putting this together, we're actually very optimistic and bullish on [Campus Queretaro]," Damphousse said. "We see huge potential there. It is easy, I think, to get bogged down in what the projections were versus what reality is, but ... I think we're doing remarkably well. We are committed to moving forward with this." 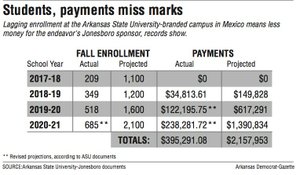