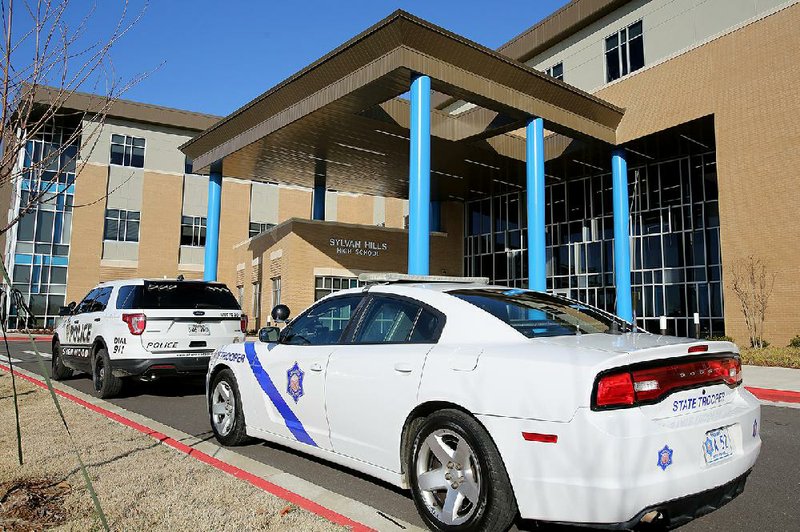 Arkansas State Police and Sylvan Hills police vehicles are parked outside Sylvan Hills High School, where there was a large police presence when the school reopened Friday. (Arkansas Democrat-Gazette/Thomas Metthe)

Authorities have made a fourth arrest in the online threats last week against Sylvan Hills High School in Sherwood.

On Friday, an FBI official announced that charges had been filed against three juveniles in the "hoax" threats, and more arrests were likely.

The threats led the Pulaski County Special School District to close the Sylvan Hills main campus Wednesday and Thursday and to close the school's North campus Thursday. The latter, also known as the freshman academy, is 4 miles from the main high school.

An FBI spokesman declined to comment Saturday about whether the arrested minors were students at the school or what role they played in the threats that led the school to close.

FBI spokesman Connor Hagan confirmed Friday that the suspects who were arrested earlier that day were in the "general area of Pulaski [County]," and one was arrested by local law enforcement officers, while the other two were picked up by federal agents.

None of the three suspects Friday were charged with federal crimes, but the FBI is involved in the investigation, Hagan said. Information about charges against the fourth person arrested was not available late Saturday.

An FBI public affairs officer said the school has been very cooperative in the investigation. FBI Little Rock tweeted its thanks to the Sherwood Police Department, the Arkansas State Police, and to the administrations and staffs at Sylvan Hills High School and Pulaski County Special School District.

Two threats also were made last week against Little Rock schools, one day after the threat against Sylvan Hills High. In those cases, police were sent to Little Rock Central High and eStem High School, but the schools didn't close. There had been no arrests in those cases as of late Saturday.

The investigation into the threats is ongoing.