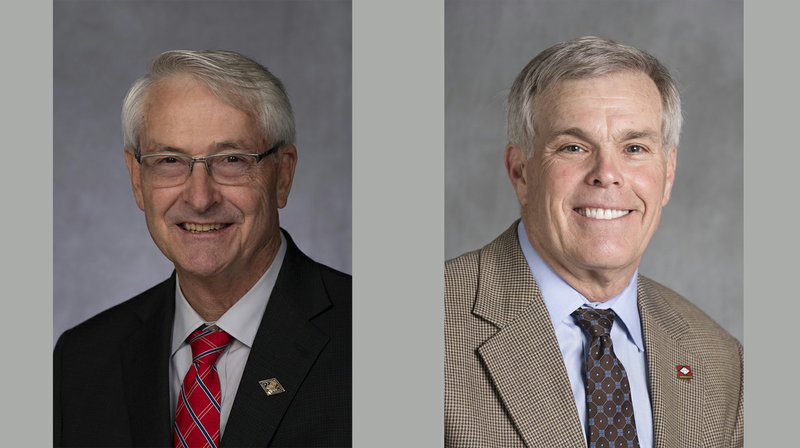 One of the most intense legislative elections in the March 3 primary is in northeast Arkansas, where the National Rifle Association last week endorsed the challenger over a previously favored senator because the latter voted against “stand your ground” legislation in 2019.

Sullivan and Cooper are Republicans from Jonesboro. Senate District 21 comprises most of Craighead County, including Jonesboro.

“It depends on turnout and who can get their voters out,” Sullivan said of what he called a close race. “I don’t think there is an underdog or a favorite in this race.”

Cooper, who has the endorsement of Republican Gov. Asa Hutchinson, acknowledged that the race will probably be closer than he would like it to be.

“If we continue to do what we need to do and work hard through Election Day, I think we should win,” said Cooper.

The candidates have been in a close race before. Cooper narrowly defeated Sullivan in a special primary runoff for the Senate District 21 seat more than six years ago. In that November 2013 runoff, Cooper beat Sullivan by 67 votes — 1,486 to 1,419.

Cooper, 72, has represented the Senate district since a special election in January 2014. He retired as a manager for Southwestern Bell Telephone Co., which is now part of AT&T.

Sullivan, 69, has represented House District 53 since 2015. He is a retired executive for Ascent Children’s Health Services.

“The two hot races up here are Senate 21 and House 53, which look to drive turnout in addition to the four judicial races that are contested,” Holliday said last week. Three Republicans are vying for Sullivan’s House seat.

The winner of the Senate District 21 primary will be unopposed in the Nov. 3 general election because no other candidates filed.

Cooper said voters should reelect him because “I am a common-sense Republican and I think my voting history shows that. The things I do promote the good of the community.”

Sullivan said voters should cast their ballots for him because “people can trust what I say I am going to do. People want us to keep our promises, and I don’t think John has done that.”

Cooper responded, “I have done exactly the opposite of that. I kept my promises.”

Cooper was the only Republican on the Senate Judiciary Committee to vote against “stand your ground” legislation that fell one vote short of clearing the committee in March of last year.

“As a consequence of his support of gun control groups and their agenda during last year’s legislative session, the NRA will not endorse Sen. Cooper for the 21st Senate District of Arkansas,” Matt Herriman, the NRA’s state director, wrote in an email last week to the Arkansas Democrat-Gazette.

“Rep. Dan Sullivan, on the other hand, has continually demonstrated unwavering support for the law-abiding gun owners of Arkansas and has earned our endorsement in this race,” Herriman said.

Cooper joined three Democrats in voting against the bill that would have eliminated the “duty to retreat” from Arkansas self-defense laws. The vote took place after hours of testimony against the measure from gun-control groups, law enforcement officials, prosecutors and civil-rights advocates.

The senator said he voted against the bill after receiving thousands of calls from people with concerns about it and attorneys advising him that the legislation could be used by a criminal to target somebody and get away with murder.

“I am totally following what I saw in the bill and what my conscience told me to do and I took advice from people in the legal profession, prosecutors, state police, criminal defense lawyers, and even judges,” he said.

But Sullivan said he favors the “stand your ground” bill because the Second Amendment “is your God-given right.

“We have to be careful about taking away people’s rights,” he said. “It is a God-given right and, if one can’t stand up for our God-given right, I don’t know what we are down there for, down there being in Little Rock and the Legislature.”

Sullivan said he doesn’t consider the “stand your ground” legislation a license to murder people — “absolutely not.”

Cooper said, “I have had an A rating [from the NRA] since I have been down there and for them to ding me over one vote is disappointing.

“I don’t think that will make the difference in this race. It is very disturbing to me that the NRA would take a legislator from an A to F rating based on one vote and public support for the vote,” he said.

But Herriman said in a written statement that “Sen. Cooper’s anti-gun actions are much broader than his vote against the right to self-defense in Arkansas’s 2019 legislative session.

“For him to claim his ‘F’ rating is based on a single vote illustrates how out-of-touch he truly is,” he said. “Labeling self-defense ‘legalized murder’ should be more than enough for any reasonable Arkansan to understand where Sen. Cooper really stands when it comes to the rights of all Americans to defend themselves. Crawling into bed with the notorious Mike Bloomberg and his gun control group is further proof that Cooper is no longer pro-gun.”

Cooper replied that his “pro 2nd Amendment voting record proves this is the only piece of legislation where I have disagreed with the NRA. In fact, I agree with the principle of self-defense.

“The disagreement is over how to word it into law. I’m disappointed to see the NRA fall into the trap of our current toxic political environment where if we don’t agree 100% of the time, we are 100% enemies,” he said in a written statement.

“To ignore my previous endorsement and A rating is an insult to all of those working to protect the 2nd Amendment in ways that will hold up in court. I came to the table with local law enforcement, public defenders, and prosecutors to work through the issues in this legislation and did in fact examine amendments so we could pass a bill,” Cooper said.

When he announced his challenge of Cooper in May, Sullivan said Cooper has failed to live up to “conservative promises” to defund the state Medicaid expansion program. Sullivan has consistently voted against funding the program.

In 2015, Cooper said he voted to authorize the use of state and federal funds for the Medicaid expansion program because “I think that this is the only way out of a bad situation.”

“I don’t believe just outright defunding is the way to go because of the havoc it would create. I do look at the governor’s plan for the next year or so, or however long this lasts, to be the proper exit strategy for some of the problems we have with it,” Cooper told the Democrat-Gazette at that time.

The Medicaid expansion is now known as Arkansas Works under Hutchinson. It provides largely private health care insurance to about 246,000 low-income Arkansans.

In fiscal 2020 that started July 1, the state’s share of the program is projected at $165.7 million, while the federal government’s share is at $1.78 billion, according to the state Department of Finance and Administration.

Cooper said the state has invested $244 million in general revenue to match federal funds for the Medicaid expansion in the past five to six years and the state’s budget and health care have benefited from the program.

“Then, the question is how do you pay for it and do you manage that?” he said. “President [Donald] Trump has offered block grants.”

Sullivan said he wants to leverage his vote for granting spending authority for the Division of Medical Services, which includes authorization for the use of state and federal funds for Arkansas Works, to restore funding cutbacks for services such as behavioral health and disability services in the traditional Medicaid program. “I am committing to vote against it until we change those things.”

Cooper said he plans to vote for Issue 1 on the general election ballot.

Sullivan said he plans to vote against it.

Issue 1 is the proposed constitutional amendment that would permanently extend the state’s temporary highway funding 0.5% sales tax approved by voters in November 2012.

State officials project it would raise about $205 million a year for highways and about $44 million a year apiece to help cities and counties with their roads.

“We are in a situation of deteriorating highways, so if we lose this half cent we are going to be in an accelerated time of decline in our highways,” Cooper said.

Sullivan said the sales tax “should die and the Legislature should solve that problem. This constitutional amendment was an end run around that.”

Last year, Cooper voted for and Sullivan voted against what became Act 416 of 2019. It’s projected to raise $95 million a year for state highways and about $13 million a year apiece for cities and counties for roads. Act 416 imposed a wholesale sales tax on gas and diesel, raised registration fees on electric and hybrid vehicles and authorizes the reallocation of state funds for highways.

Act 416 and Issue 1 are components of the governor’s plan to raise $300 million a year for highways.

Cooper said most of the state’s general revenue budget is used to fund public schools, human services and health programs, correctional programs and colleges and universities, so shifting more general revenue to highways would mean less money for those programs.

Hot Springs gun range owner Jan Morgan, who lost to Hutchinson in the 2018 primary election, contributed $100 to Sullivan in June according to Sullivan’s campaign-finance report.

She said in a text message to the Democrat-Gazette that the Senate race “is a repeat of my race against Asa [e]xcept I believe Sullivan will defeat Cooper … unless democrats flood our primary, which is where most of Cooper’s support is coming from …”

Hutchinson, whose PAC contributed $2,700 to Cooper’s campaign in June, said in an interview that “anytime you have got a state representative challenging a senator it is going to be an interesting race in that area.

“But John has done a good job and he’s got a conservative record and I think that will put him in good shape for re-election,” he said. 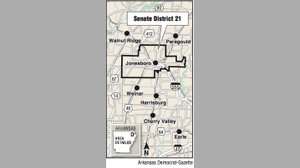 A map showing the location of Senate District 21.