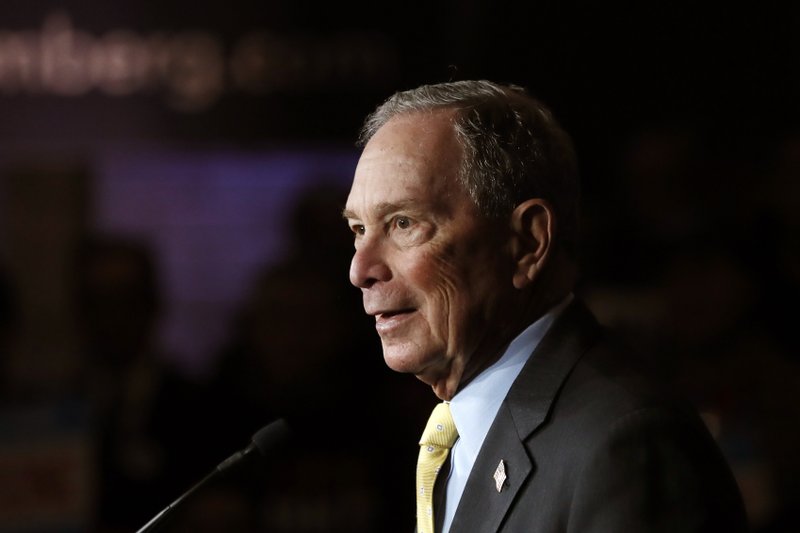 Former New York Mayor Mike Bloomberg's ascent has now made him a leading target for his rivals in the Democratic presidential race, with several candidates offering searing criticism Sunday of his record and the millions of dollars he is spending on his campaign.

The heightened scrutiny comes in the wake of a recently resurfaced recording of a 2015 speech in which Bloomberg defended New York's stop-and-frisk policy targeting minorities.

It also comes one day after a Washington Post report on the lawsuits that have been filed against Bloomberg over the years alleging discrimination against women and sexual harassment at his company. A number of the cases have either been settled, dismissed in Bloomberg's favor or closed because of a failure by the plaintiff to meet filing deadlines.

In an interview on Fox News Sunday, former South Bend, Ind., Mayor Pete Buttigieg called on Bloomberg to publicly address the allegations regarding his treatment of women.

"I think he's going to have to answer for that and speak to it," Buttigieg told host Chris Wallace.

Buttigieg, who edged out Sen. Bernie Sanders, I-Vt., in the Iowa caucuses and placed a close second to him in the New Hampshire primary this month, said there is "no comparison" between Bloomberg's alleged behavior and the way President Donald Trump has treated women and people of color.

But he sought to draw a contrast between Republicans and Democrats, arguing that "we in our party hold ourselves to the highest standard."

"It is going to be critical for us to have a nominee who can authentically lead and who can show growth on these challenges," Buttigieg said.

"I'll say this: I am on your show right now, Margaret, answering these tough questions," Klobuchar told host Margaret Brennan on CBS News' Face the Nation. "Where is he? He just keeps running a bunch of ads. He'll probably have more ads during your show in certain states than I'm on answering your questions. I think he cannot hide behind the airwaves and the money."

Former Vice President Joe Biden also criticized Bloomberg. In an appearance on NBC News' Meet the Press, Biden said that "$60 billion can buy you a lot of advertising, but it can't erase your record."

Bloomberg is skipping the first four states in the Democratic nominating process but has spent hundreds of millions of dollars on advertising across the country ahead of the March 3 Super Tuesday contests.

According to the 2015 audio, Bloomberg told an audience at an Aspen Institute event that "the way you get the guns out of the kids' hands is to throw 'em against the wall and frisk 'em."

As audio of the speech recirculated, Bloomberg's campaign last week released a statement in which the former mayor said he had "inherited the police practice of stop-and-frisk, and as part of our effort to stop gun violence it was overused."

"By the time I left office, I cut it back by 95 percent, but I should've done it faster and sooner," Bloomberg said in the statement. "I regret that, and I have apologized -- and I have taken responsibility for taking too long to understand the impact it had on black and Latino communities."

Among the lawsuits that have been filed against Bloomberg over his behavior toward women, the most high-profile case involved a former saleswoman. She sued Bloomberg personally as well as his company, alleging workplace discrimination. She alleged Bloomberg told her to "kill it" when he learned she was pregnant.

Bloomberg has denied her allegation under oath, and he reached a confidential settlement with the woman.

On Saturday, he tweeted in defense of his treatment of women throughout his career.

"I would not be where I am today without the talented women around me," he said. "I've depended on their leadership, their advice and their contributions. As I've demonstrated throughout my career, I will always be a champion for women in the workplace."

Information for this article was contributed by Michael Kranish of The Washington Post.