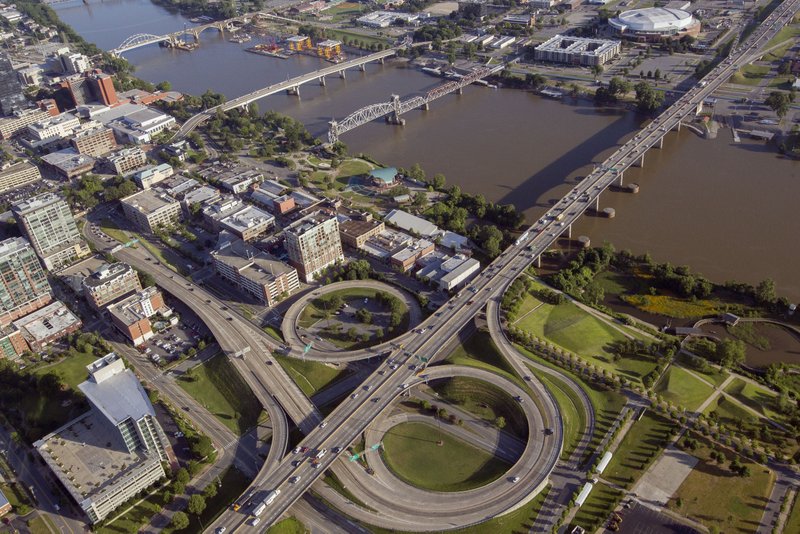 What will be built in what is now called the first phase of the 30 Crossing project has, at long last, been hammered out.

That means the Arkansas Department of Transportation and the joint venture it selected to build the $631.7 million project between Little Rock and North Little Rock have settled on not only what will be built beginning as soon as this year, but what parts of the overall project will have to wait for a subsequent phase or phases, and what will not be built at all.

Word of a new project scope came from filings in a lawsuit that seeks to stop the project until a more rigorous review of its impact can be conducted.

At the request of all parties, U.S. District Judge James Moody Jr. granted a pause in litigation to allow the new scope to be reevaluated to determine whether the federally approved "finding of no significant impact" remains valid in light of the new scope.

Keli Wylie, the state transportation agency's executive overseeing the project, said in an interview last week that she is confident that the revised scope will reduce the project's impact. The reevaluation is expected to be completed by the end of the month or in early March.

The project, six years in the making, is the most expensive project the department has ever undertaken.

It focuses on improving the congested corridor through downtown Little Rock and North Little Rock, an area notable for the convergence of six major roadways in the space of fewer than 7 miles.

The project includes the Interstate 30 bridge over the Arkansas River, which dates to the late 1950s and was built at a cost of $5.5 million. About 124,000 vehicles a day use the six-lane bridge. It will still be replaced under the proposed new scope for the project.

"A new river crossing" is and remains the "centerpiece" of the project, said Randy Ort, a department spokesman. "For our original scope we started with that river crossing north and south to hopefully address other critical needs we had throughout that corridor."

The corridor extends from Interstate 530 in Little Rock to Interstate 40 in North Little Rock. The proposed widening of the route from Interstate 630 west to I-530 has been dropped from the new scope of the project and will be done in a subsequent phase, Wylie said.

The design calls for widening selected sections to 10 lanes and features four lanes that would be more like city streets, with ramps to lower speeds, narrower lanes, traffic signals and other features that officials say will allow traffic moving on or off I-30 to safely interact with pedestrians and other noninterstate traffic.

The 10-lane design has been referred to as a mix of six main through lanes, which is what the thoroughfare has now, and four collector-distributor lanes. The latter would be separated by a wall from the main lanes, have slower speeds and allow traffic traveling between Little Rock and North Little Rock to cross the bridge without entering the main interstate lanes.

Despite the ongoing litigation, Wylie expects construction to begin on the project later this year.

Work to revise the scope of the project began more than a year ago after the joint-venture partners tapped for the project -- Kiewit Infrastructure South of Fort Worth and Massman Construction Co. of Kansas City, Mo. -- said it would cost about $1 billion to build everything in the original plans.

The transportation agency is using for the first time the design-build contracting method, which in this case sets a budget and asks competing firms to say what they can build with the money. The department has about $540 million for the project.

There is also $91.7 million in the budget for preliminary design, environmental assessment and rights-of-way costs.

Commonly used elsewhere on complicated and expensive projects, the design-build method is seen as a way to speed completion at less expense than the traditional method in which design is done first and then a construction contract is awarded to the lowest responsible bidder.

"Because we were confined by a budget, we had a feeling all along we wouldn't get all we wanted," Ort said. "But we are very pleased with what we're ending with, and these improvements will make a dramatic positive difference in travel through the Little Rock-North Little Rock downtown areas."

That interchange work has been eliminated from the project. Given that improving that area could have affected nearby wetlands, eliminating it turned out to be a good thing, Wylie said.

"Now we have a lesser impact," she said. "That needs to be something that is taken into account."

Braided ramps cross over one another and are vertically separated by concrete pillars that elevate one or more of them and streamline traffic flow, according to the Texas Department of Transportation.

"These ramps separate incoming and exiting traffic by having one ramp pass over the other, thereby eliminating traffic weaving, improving safety and easing congestion," the department said on its website.

In this instance, the braided ramp will eliminate the requirement that eastbound drivers trying to reach U.S. 67/167 cross several lanes of traffic, which they do now because they exit the interchange in the far outside lane and contend with traffic on I-40 coming from the west.

The project's reduced scope also eliminates, for now, any widening between Bishop Lindsey Drive in North Little Rock and the north terminus. Improvements that will be done initially include repaving and restriping the eastbound section of I-30 in that area to four lanes.

"We got a design exception from Federal Highway Administration," Wylie said.

Also eliminated from the first phase is replacing the bridges over the Union Pacific Railroad yards. Wylie said her agency and consultants haven't reached an agreement with the railroad.

Still part of the project's revised scope is removal of the I-30/Arkansas 10 cloverleaf interchange in Little Rock and replacing it with a split diamond interchange, which along with the bridge replacement, remains a priority in the first phase. Eliminating the cloverleaf will create space for what Little Rock officials envision as a 17-acre park. 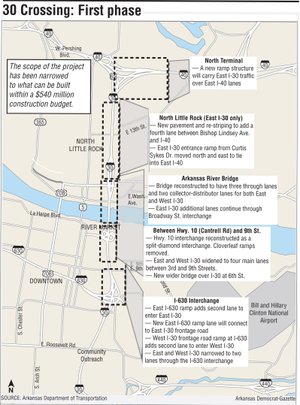