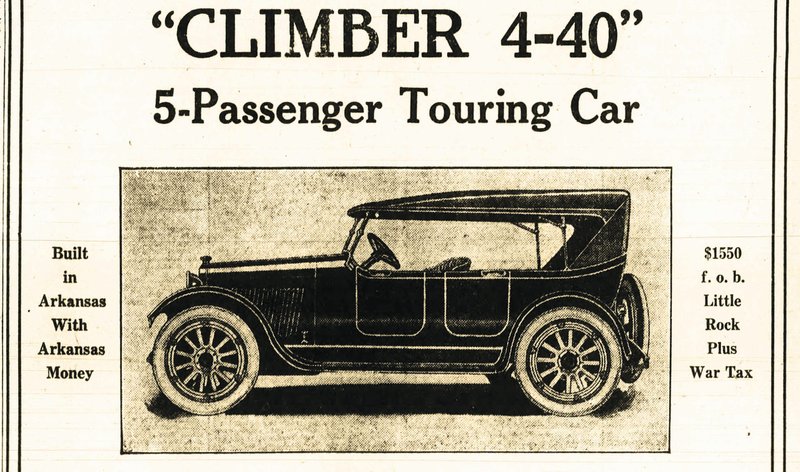 This ad for the Climber Motor Co. 4-40, a 5-passenger touring car manufactured at Little Rock, appeared in the May 8, 1920, Arkansas Democrat. (Arkansas Democrat-Gazette)

In February 100 years ago, an outbreak of influenza was on the wane, and quarantines were lifting around Arkansas. At Little Rock, schools, churches, movie theaters, pool halls and the county courthouse reopened; memorial services postponed for two weeks were held; streetcar operators were allowed to close car windows; Sheriff Taylor and his four deputies were on the mend.

Although nowhere near so serious as the pandemic flu of 1918, the 1920 flu season was deadly on its small scale. (Among its casualties was 35-year-old Albert W. Tomlin of Greenwood, who had just been named state mine inspector after a politically tumultuous selection by Gov. Charles Brough.)

But today's Old News concerns a different sort of illness that caused the sudden death of a healthy young man. Joseph East, 26, a driver for the American Express Co. at Little Rock, was shot in the chest about 5 p.m. Feb. 8, 1920, by his neighbor, an automotive painter.

Robert A. Wampler, husband of Essie, father of Charlotte, Roberta, Hazel and James, shot Joseph while the doomed man's wife, Lizzie, their 2-year-old and housemates Mr. and Mrs. W.T. Gallegly were in their backyard. Old News described this awful event Feb. 10, but here's a shorthand version:

The Easts and the Galleglys were chasing rabbits that had escaped from a hutch behind their home in Pulaski Heights' then-new Pfeifer's Addition. Essie Wampler was in her yard, the next house down C Street. An empty lot stood between the yards. Joseph whistled at his lalloping rabbits. Essie made a face and laughed.

A short while later, Robert crossed the lot to the Easts' place and called Joseph off his porch. The others couldn't hear what Robert said, but Joseph said something like, "Brother, you're in the wrong." Then Robert shot him.

As the Arkansas Democrat reported on that long ago Feb. 11, at first, chatter around the courthouse was that Robert would plead self-defense. He had told the city clerk that Lizzie and Essie had quarreled and that he had fired at Joseph because the younger man was coming at him, climbing a small wire fence with his right hand in his pocket in a menacing manner.

But the only witness to testify at a preliminary hearing in the case was the Easts' housemate W.T., and he insisted that Joseph was not armed, not even with a pocketknife.

Robert's defense attorney, Fred Isgrig, did not present evidence; the judge ordered Robert held to the grand jury. On Feb. 16, that jury returned a first-degree murder indictment. Judge John R. Wade refused to release him on bond. Back he went to the county jail to stand trial — in three months.

When the case came to trial in May, Isgrig surprised prosecutors and reporters by entering a plea of insanity on his client's behalf.

Isgrig announced that after speaking with his client many times and also receiving information from an undisclosed source, he had hired a private doctor to assess Robert. Dr. Pat Murphy had interviewed the accused in jail for "practically an hour" and came away convinced that "Wampler's brain is diseased, and that though he is rational at times, there are times when he is not."

As the Little Rock Daily News put it:

Dr. Murphy testified that he had examined Wampler on May 12, discovering that he had an organic brain disease induced by paresis and that he was subject to delusions, believing himself to be the victim of persecutions.

Joseph's wife, mother, sister and child were in the courtroom for this shocker, having traveled from Rochelle, La., where Lizzie went to live immediately after Joseph's death. Essie Wampler and two of her children were there, too, an infant and a toddler.

Robert wept when the children were placed in his arms. The Democrat called this his first display of emotion since his arrest.

But the commissioners agreed with Murphy, unanimously.

Kirk told the court that Robert said his grandmother, mother and sister all were insane, but he was not. Robert became "very indignant" when questioned about his own condition.

"Paresis" is a fascinating historical diagnosis. It covered a range of symptoms often blamed on syphilis, including paralysis. A history essay posted online by The British Psychological Society lists these as "grandiose delusions, a staggering gait, disturbed reflexes, asymmetrical pupils, tremulous voice, and muscular weakness." The essay adds that such patients were expected to die, within months if not weeks.

Arkansas courts did not try insane people, but the commission's report could not by itself excuse Robert from judgment; such reports were only for the court's information. Prosecutor George W. Emerson could argue against its findings before a jury if he chose, or he could choose not to contest it and instead advise the jury to declare Robert insane. The jury deliberated for four minutes May 18, and Robert was committed to the State Hospital.

The Daily News observed that the judge had called Robert to the bar to ask if he had any statement.

Trembling violently, he walked unsteadily from the prisoner's bench and said:

Robert seemed incapable of grasping the meaning of the proceedings. The News added:

Wampler is a nervous wreck. He wept frequently. His hands trembled incessantly and he kept twisting a handkerchief between them. Most of the time his head was bowed abjectly.

Physicians say that he will probably not live long enough to leave the hospital cured.

If he had, the trial proceedings would have reopened. But in fact, he did not. Robert Wampler died at the State Hospital on April Fool's Day 1921.

We could end this story here, but there is one detail we have learned about Robert that's waving its tiny-detail hands and crying, "What about me?"

This man was 49 when he shot Joseph and was the paint shop foreman for the Climber Motor Co., an automobile factory that was struggling to its feet at Little Rock. Robert had been a painter for at least 15 years.

What was in the paint used on automobiles in the first two decades of the 20th century? Could some chemical exposure explain Robert's symptoms?

Of course, we do not know. But asking the question opens an inviting rabbit hole, down which Old News intends to hop — next time.