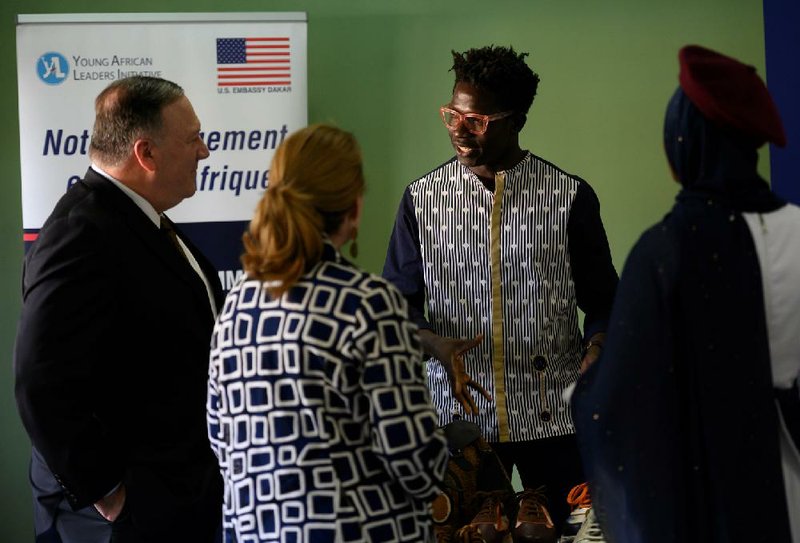 Secretary of State Mike Pompeo (left) and his wife Susan on Sunday talk with an entrepreneur in Dakar, Senegal, who received assistance from a U.S. government program. More photos at arkansasonline.com/217pompeo/. (Andrew Carballero-Reynolds/AP)

DAKAR, Senegal -- U.S. Secretary of State Mike Pompeo said President Donald Trump's administration is working to determine what level of American military forces is needed in West Africa to counter the rise of extremist violence in the region.

Speaking at the end of his visit to Senegal, Pompeo said he discussed the issue of the U.S. military presence in West Africa with President Macky Sall amid reports that the Trump administration intends to reduce troops in Africa.

"We did have a lot of conversation about security issues here, about America's role in those. We've made it clear that the Department of Defense is looking at West Africa to make sure we have our force levels right," Pompeo told reporters Sunday. "I was here as CIA director, so I know these security issues very, very well. We'll get it right, we'll get it right collectively; I'm convinced of that."

Pompeo said the U.S. will work with Senegal, other West African countries and France to counter the growing threat of extremist violence.

"We have an obligation to get security right here, in the region -- it's what will permit economic growth and we're determined to do that," Pompeo said. "And I'm convinced that when our review is done, we'll have a conversation with not just Senegal, but all the countries in the region. ... We'll deliver an outcome that works for all of us."

Senegal's Foreign Minister Amadou Ba confirmed that West Africa is concerned about the extremist violence that is spreading in West Africa.

"Terrorism has no border, and it is very costly," said Ba at the news conference with Pompeo. He said that Senegal and the region wants continued military support from the U.S.

Pompeo's arrival in Dakar, Senegal's seaside capital, on Saturday marked the first time in more than a year and a half that an American Cabinet official had stepped foot in sub-Saharan Africa. Pompeo's predecessor, Rex Tillerson, cut short a trip in March 2018 and was fired shortly afterward. Pompeo is also visiting Angola and Ethiopia.

In Senegal, Pompeo also met with business leaders and announced five projects that would involve U.S. companies, including a new, 100-mile-long highway.

Speaking alongside Senegal's economy minister, Pompeo said his visit's purpose was to "celebrate these great accomplishments between our two countries and, importantly, between our two private sectors."

The United States has lagged far behind China in establishing trade relationships with African countries, and China has been the continent's biggest trade partner for more than a decade. Much of China's economic relationship with Africa is driven by investments by state-owned companies that have contributed to a boom in factories, ports, power plants, railways and paved roads across the continent.

Meanwhile, U.S. engagement with many African countries has largely revolved around humanitarian aid and cooperation on security matters, including troop training, a constellation of new bases and the sale of military equipment.

Pentagon officials have briefed Congress on their intention to shrink the U.S. military presence in West Africa, where some 1,400 soldiers are stationed. Congress has urged the Pentagon to reconsider, as have European and West African leaders. France maintains the largest non-African troop presence in the region.

The U.S. Commerce Department hopes to deepen trade and investment ties through a program called Prosper Africa, though Pompeo's trip to the continent is the first time a high-level official has traveled there to promote it. Coupled with the new visa restrictions and looming troop withdrawal, Pompeo's pitch for economic partnership may come with more questions than answers, analysts said.

"When the U.S. imposed, the week before last, a travel ban on Nigeria, Eritrea, Sudan and Tanzania, I think, this sort of sends a conflicting signal to American business. Certainly, the announcement that they're considering cutting the American security assistance on the continent is also puzzling," said Witney Schneidman, the senior adviser for Africa at Covington and Burling, an international law firm. "Pompeo's going to have his hands full in terms of explaining the different messages coming from Washington."

Earlier this month, the U.S. trade representative announced the beginning of talks between the United States and Kenya on a bilateral free-trade agreement, which would be the first for a sub-Saharan African country.

Speaking in Washington, Kenyan President Uhuru Kenyatta said shared ideals made the two countries natural partners, but he also cautioned against seeing Africa as an arena for an economic proxy war with China.

"We don't want to be forced to choose," he said. "We must begin to look at Africa as the world's biggest opportunity, and I believe that you can dare to look at it with a fresh eye."

In Angola, an oil-rich country whose people remain impoverished, Pompeo will meet with President Joao Lourenco, who is making strides against corruption, including actions against close relatives of the former leader.

Then Pompeo heads to Ethiopia, Africa's second-most populous nation with more than 100 million people and the headquarters of the African Union.

Ethiopia, a key U.S. security ally in the Horn of Africa, has undergone dramatic political reforms since Nobel Peace Prize-winning Prime Minister Abiy Ahmed took office in 2018. The loosening of repressive measures has been exploited by some with long-held grievances, leading to sometimes violent ethnic tensions that threaten a national election later this year.

Information for this article was contributed by staff members of The Associated Press and Borso Tall and Max Bearak of The Washington Post.