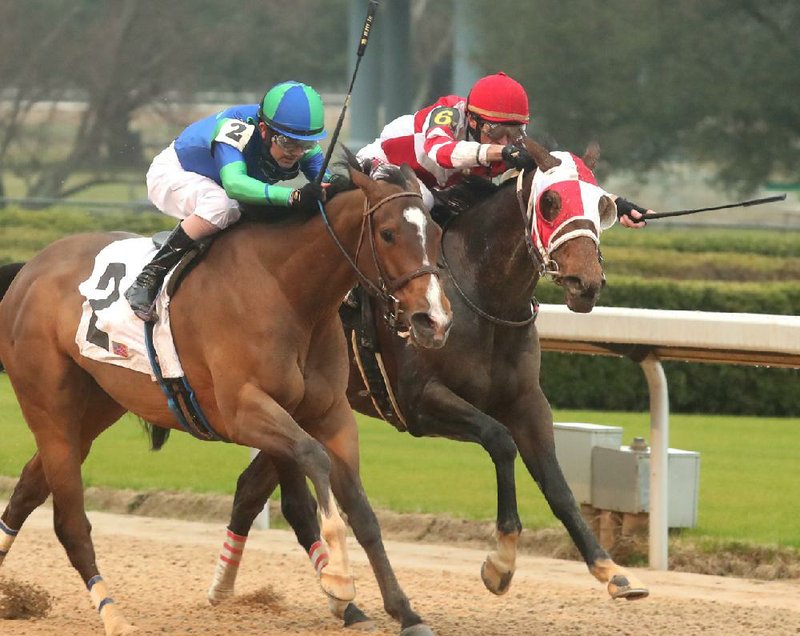 HOT SPRINGS -- Bettors of funny horse names were winners if they hit the exacta in Monday's Bayakoa Stakes at Oaklawn.

Go Google Yourself, off at 3-1, passed Whoa Nellie 30 feet short of the wire to win the Grade III 1 1/16-mile race before an estimated crowd of 19,500 at Oaklawn Racing Casino Resort on Monday.

"That name gets a lot of compliments," McGee said.

"It was a tough race," McGee said. "I didn't get confident until she made the lead, actually, which was right there at the wire. She's a game, hard-trying filly, but the fact that we ran down that other filly, I was really proud of her."

Six entrants -- three fillies and three mares -- started, including Lady Suebee, who led the field through an opening quarter-mile in 23.91, with Go Google Yourself a length back in second. Whoa Nellie was last, but only 13/4 lengths behind the leader.

"Although it was a six-horse field, it was a tough six horses, I thought," McGee said. "There was a lot of stake experience among the horses in there, but Google is just a classy, hard-trying filly. That's all you could ask for."

Lady Suebee led through the half in 47.70 and three-quarters in 1:11.96, but as the field approached the stretch, Whoa Nellie, trained by Larry Jones and ridden by Joe Rocco Jr., pulled in front to lead by 11/2 lengths over Go Google Yourself in second. Cairenn was in third 41/2 lengths behind the leader.

"She got a good ride," Cairenn trainer John Ortiz said. "Johnny V. did everything we asked him to. He knew what he was doing out there, and he gave her her best shot to get on the board."

Cairenn has finished third in her last four stakes attempts, three of which were Grade III.

"She's honest," Ortiz said. "She's very honest, but one of these days we're going to win one of these."

Go Google Yourself gradually gained on Whoa Nellie throughout the stretch before she finally pulled in front.

It was Go Google Yourself's first start since she finished second in the Grade II 11/8-mile Fall City Handicap at Churchill Downs on Nov. 28.

"We've always spaced her races out," McGee said. "The only time we wheeled her back off a two- or three-week layoff, she threw craps, so Samantha said, 'Let's space her races out,' so after the Fall City, we pretty much decided on this race."

McGee said the next races considered for Go Google Yourself are Oaklawn's Grade II 1 1/16-mile Azeri Stakes on March 14 or the Grade I 1 1/16-mile Apple Blossom Handicap on April 18.

"I think it's safe to say her next race will be here," McGee said.