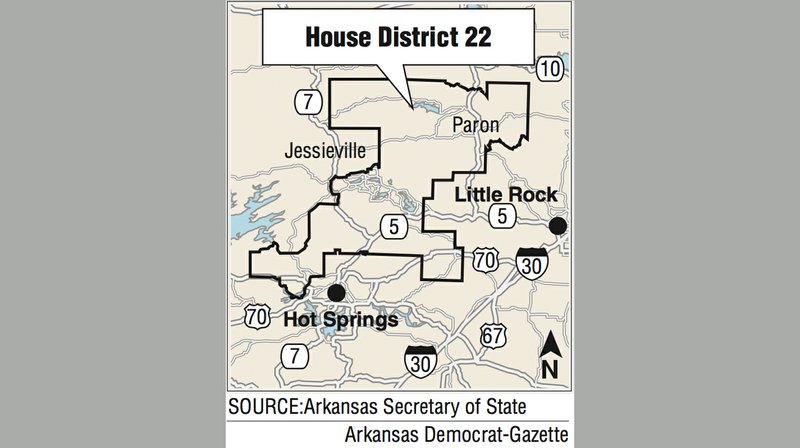 The four candidates running to represent portions of Saline and Garland counties said their backgrounds are what distinguish them.

Garland County Justice of the Peace Richard McGrew pointed to his business experience.

Jessieville School Board member Jack Wells said his roots in the district made him the best choice.

Retired nurse Judy Bowers, a Libertarian, said her career working in health care would serve the district well in the state Capitol.

The House District 22 seat is open. It was held by Rep. Mickey Gates, R-Hot Springs, who was expelled from the state House of Representatives in October after pleading no contest to failing to pay state income taxes. Gates had represented the district since 2015.

The House District 22 seat — which represents eastern Garland County and northern Saline County — will appear on the March 3 ballot twice.

The three-way Republican primary between McGrew, Midkiff and Wells will determine which candidate will represent the GOP in the November general election against Bowers to serve the 2021-22 term.

Also on March 3, McGrew will face Bowers in a special general election to serve the remaining nine months on Gates’ term. McGrew defeated Wells in a December special primary.

Each of the candidates said that one of the hardest parts of the campaign has been explaining the unusual circumstances to voters. McGrew, for example, said that he has emphasized to supporters that they must vote for him twice on March 3.

McGrew, 62, is a Hot Springs business man who serves on the Garland County Quorum Court.

He started McGrew Electric with his wife in 1988, and the company, he said, grew to a staff of about 30 employees with projects around the state. He eventually formed McGrew Companies, which is made up of five different corporations. He is semi-retired but remains involved in Mc-Grew Properties, a real-estate holding and rental company.

McGrew, who also spent eight years on the Hot Springs Planning Commission, said his business and life experiences distinguish him from his opponents.

“I have decades of knowledge and experiences over my opponents,” McGrew said. “I have a lot of business experiences over a lot of different businesses. I’m knowledgeable about construction contracts and other similar issues, and I’ve added a lot of jobs to the community.”

Wells , a 43-year-old small-business owner from Hot Springs Village, serves on the Jessieville School Board. Wells said that much of his campaigning has been done out of his screen-printing and embroidery shop, Sew Perfect Embroidery.

He said that his 40 years of living and working in the community made him the right choice to represent the district at the state Capitol.

“I think the advantage I have over [McGrew and Midkiff] is for 40 years I have lived in and been connected to Hot Springs Village,” Wells said. “I think that’s important because our community is very unique. It’s people that have come from all corners of this country, all walks of life. They’re very accomplished people. I will rely on the friendships and relationships I’ve built over those 40 years to make decisions on issues about what’s best for the district.”

Midkiff, 53, is a field training officer for the Garland County sheriff’s office, and member of the U.S. Army Reserve. He also teaches criminal justice and political science at National Park College. If elected, Midkiff said he was retire from the sheriff’s office and Army Reserve.

Midkiff said he is the right choice for District 22 voters because of his transparency and public service.

“I’m pretty vocal about where I stand on the issues,” Midkiff said. “I have served in the armed forces. I know what it’s like to be in situations and have to make on-the-spot decisions. I have a history of service. I know what it means to serve people.”

Bowers, 68, is a retired nurse who owns a quilting business, focused mainly on teaching. She and her husband retired to Hot Springs Village from Minnesota seven years ago.

She said her background in health care would allow her to bring a different perspective to the state Legislature.

“There’s a lot of business people and lawyers in the House already,” Bowers said. “I think we need some bal ance, and I could contribute in a significant way.”

Wells and Midkiff both oppose Issue 1 on the November ballot, which would permanently extend the state’s 0.5% sales tax for road funding. McGrew said he’s still deciding how to vote.

Wells said Arkansas has plenty of revenue, and any roads that needed to built or repaired should’ve been completed under the approved 10-year window for the tax, which voters authorized in 2012.

Midkiff, similarly, said he opposed Issue 1, and the Legislature should focus on spending priorities. He said much of his legislative focus would be on further reducing taxes, adding that food and used cars should not be taxed.

“Arkansas has the money,” he said.

McGrew said he hasn’t decided whether he’ll support or oppose the highway tax continuation, but he said he was glad voters will have a chance to voice their opinion.

“I have from now until [November] to get the feel of the people,” he said.

Bowers said she doesn’t necessarily oppose using a sales tax to fund highway construction and improvements, but she said that she doesn’t want a tax to be embedded into the state Constitution, as it would be under Issue 1.

“We have no idea down the road what challenges may come or how we will need to spend our money,” she said.

McGrew, Bowers and Midkiff also said they supported imposing a work requirement on beneficiaries of the expanded Medicaid. The state had created a work requirement, but it was struck down by a federal judge. The judge’s ruling was upheld on appeal.

Bowers and Wells disagree about whether families should be able to use tax dollars to pay for their children to attend private schools while McGrew and Midkiff said they are still considering their positions on so-called “voucher” programs.

Wells said he is concerned about the impact vouchers would have on public schools because they would pull money away from them.

“It’s dangerous to take public money and let it disappear into private settings,” he said.

Bowers said that government should stay out of the lives of its people as much as possible, and that includes in education funding.

“If the public decides to provide tax money for education of a child, then that money should follow that child,” she said.

Midkiff said he believes parents should have the most say in where their children attend school, but he said that he’d want to see the specifics of a voucher proposal before taking a position.

McGrew said he has been studying the effects of vouchers, which he said was a more complex issue than he first thought. He said that he wanted to become more knowledgeable on the matter before making a final decision on his stance.

Midkiff, Wells and Mc-Grew each said they oppose abortions except in rare cases such as when a mother’s life is at risk.

Bowers said abortion should be a personal choice until the fetus is 23 weeks old.