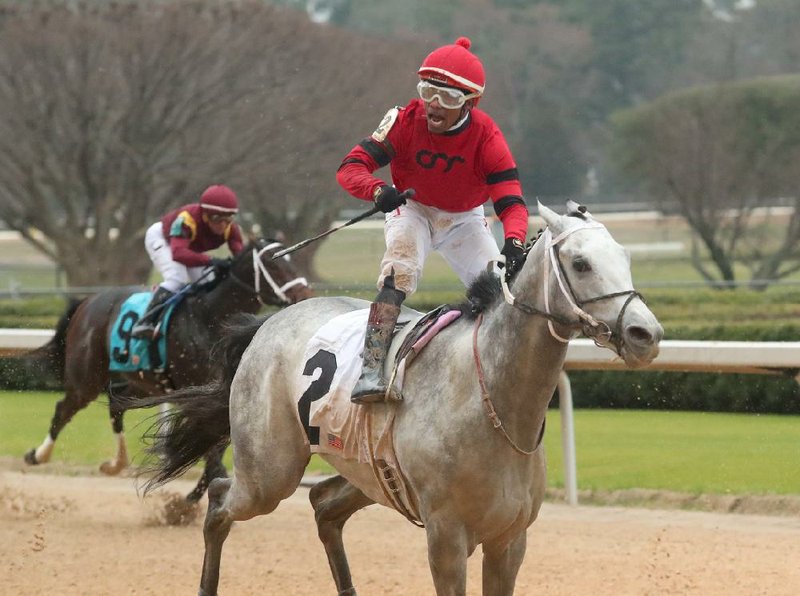 After Silver Prospector's win in the Grade III $750,000 Southwest Stakes before an estimated crowd of 19,500 at Oaklawn on Monday, his three colts in the field ran their total of wins in Derby-qualifying-points races to four.

Silver Prospector, by Declaration of War, leads the barn with two after taking the 1 1/16-mile race.

Ridden by Ricardo Santana, Silver Prospector won the Southwest on a fast track in 1:43.01, 1 length in front of second-place Wells Bayou. Trainer Brad Cox had the second- and third-place horses after Answer In, the 2-1 favorite, finished 61/2 lengths behind the winner and 21/4 lengths in front of fourth-place Shoplifted, who is also trained by Asmussen.

Silver Prospector did not trail the leader by more than 1 3/4 lengths through any of the race's timed splits.

"His position was by design," Asmussen said. "I thought he got a little too far behind in the Smarty Jones. He was in good position all the way."

The Southwest Stakes is Oaklawn's second of four Derby points races. It offered a total of 17 points, with 10 to the winner, 4 to second, 2 to third and 1 to fourth. With wins in the Southwest and the Kentucky Jockey Club Stakes at Churchill Downs in November -- and a fourth-place finish in the Smarty Jones -- Silver Prospector has 21 qualifying points to rank sixth worldwide for a place in the Derby's 20-stall starting gate at Churchill Downs on May 2.

"We were disappointed in the fourth-place finish in the Smarty Jones and thought we could've done better there," owner Ed Orr said. "We've learned a long time ago, in this business, to not get your hopes up too high, because they can be shot down pretty fast."

Wells Bayou, by Lookin at Lucky and ridden by Florent Geroux, was first out of the Southwest starting gate and led the field through an opening quarter mile in 22.89, the half in 46.60 and three quarters in 1:11.72. Silver Prospector was within 1 3/4 lengths of the lead through the quarter, 1 1/2 through the half and 1 length through three quarters. At the head of the stretch, he led Wells Bayou by a head.

"The last two weeks, the horse was training unbelievable," Santana said. "We didn't get any rain so the track was just how he liked it. He pulled me into a great spot in the first quarter, and I just became a passenger."

"I didn't really know he would be on the lead, but being in the one hole we had to ask him to run out of there," Cox said of Wells Bayou. "If someone wanted to go too fast, we were going to let him go, but he found himself on the lead, and he ran a big race. He's a nice horse."

Geroux said the early pace might have compromised Wells Bayou's stretch run, which he said was nevertheless noteworthy.

"I went a touch quicker than what I wanted to," Geroux said. "My horse ran hard even when the other came by me. He was trying really hard. It was a great race."

Asmussen-trained Southwest entrants were three of the top-four finishers in the Smarty Jones. Three Technique was the outlier, finishing second in the Smarty Jones, but trainer Jeremiah Englehart said from the start he didn't want to race Three Technique in more than three of Oaklawn's Derby qualifiers. He decided last week to wait for the Rebel Stakes, scheduled for March 14.

"I didn't want his fifth race on the year to be the Kentucky Derby if he was lucky enough to get there," Englehart said. "I just thought most likely we would look toward the Rebel and the Arkansas Derby [on April 11]. I figured we'd probably do three of the four if we were lucky enough to compete in them. I just think that's the best way to go with him right now."

Asmussen said the Rebel and Arkansas Derby are significant considerations for Silver Prospector's next starts.

"Absolutely, we'll look at the Rebel and Arkansas Derby," he said. "This series is quite lucrative, and the points are very important."