Taliban: Pact signing before month is over 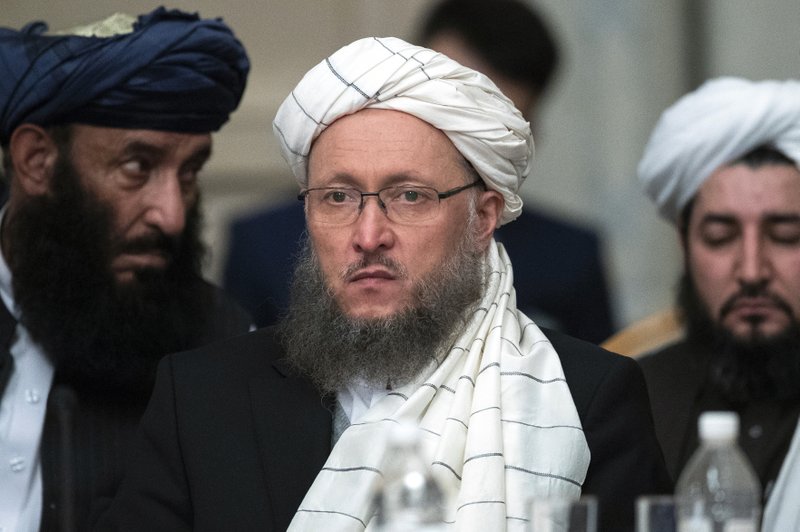 Abdul Salam Hanafi, a senior Taliban leader and member of the political commission in Doha, Qatar, is shown in this file photo. (AP file photo)

ISLAMABAD -- The Taliban said Monday that a peace deal with the United States will be signed by the end of the month, with the top U.S. negotiator describing himself as "cautiously optimistic" about the process.

Abdul Salam Hanafi, a senior Taliban leader and member of the political commission in Doha, Qatar, said in a video message shared with journalists that after negotiations, "both sides have initiated the final draft of the peace agreement. Now talks are concluded."

This is the first formal statement released by the Taliban since the United States announced the peace deal on Friday.

Hanafi said "both sides have agreed to sign the agreement by the end of this month," after making a "favorable environment before signing of the agreement." U.S. negotiators and Afghan government officials have said there will be a period of reduced violence that will last seven days.

Hanafi gave no further details on what a favorable environment would entail. American and Afghan officials also have been tight-lipped regarding details of the violence reduction.

The peace agreement will be signed during a ceremony in Doha, where the Taliban have a political office, according to the group's spokesman, Zabihullah Mujahed, and Hanafi. Mujahed was reached via WhatsApp on Monday.

"Afghanistan's neighbors, members of the U.N.'s Security Council, Islamic nations, Organization of Islamic Cooperation and other nations involved in Afghan peace issue will be invited to participate as witnesses," Hanafi said in an interview with the pro-Taliban Pashto-language news website nunn.asia.

In his first public comments since the peace talks breakthrough, U.S. envoy Zalmay Khalilzad, the chief negotiator with the Taliban, said he's "cautiously optimistic." A U.S. delegation led by Khalilzad has been negotiating with the Taliban since late 2018.

"But I am realistic enough to know that there are lots of challenges ahead," he added.

Khalilzad said that while he had received security guarantees from both the Afghan government and the Taliban, the potential remained for "spoilers" both inside Afghanistan and outside the country to upend months of diplomatic progress.

"I believe that, maybe better than any time in the last couple of decades, there is an opportunity for peace," he said, speaking in Islamabad on Monday at a United Nations conference on refugees marking 40 years of conflict in Afghanistan.

Some Afghan officials said the reduced violence would be countrywide and all parties to the conflict would halt planned offensive operations. The officials spoke on the condition of anonymity because they were not authorized to discuss the deal publicly.

There is no official word on when the reduction in violence will begin, but it's expected to be sometime this week.

If that reduction in violence holds, it would be followed by the signing of a broader U.S.-Taliban agreement under which thousands of U.S. troops would withdraw and the Taliban would begin direct negotiations with Afghan leaders.

Hanafi mentioned talks between the Taliban and the Afghan government, but he said such a step would only be taken after a mass prisoner exchange.

"When the process of releasing of 5,000 [Taliban] prisoners ... is completed, then intra-Afghan talks will begin," he said. The Taliban prisoners would be exchanged for 1,000 members of the Afghan security forces, according to Hanafi.

But Afghan officials have said previously that the exchange would be discussed during the intra-Afghan talks and not before.

The broader U.S.-Taliban agreement is nearly identical to one negotiated in September that was canceled by President Donald Trump after a Taliban attack that killed a U.S. soldier before it could be signed. The deal would begin the withdrawal of U.S. troops and require the Taliban to pledge not to harbor terrorist groups with the intention of attacking the West.

While a deal has been reached, U.S. officials have cautioned it remains conditional on the outcome of the period of reduced violence.

In a statement released by Ashraf Ghani's office Saturday, the Afghan president said "the agreement" will be finalized next week and will have "conditional content."

At an annual security conference in Munich on Saturday, Ghani took a combative tone when asked about a possible role for the Taliban in a future Afghan government.

"If the Taliban had support, why would they be so afraid of elections," he said.

"I challenge them: Put your best candidates in Helmand and see whether you win," he continued, referring to an Afghan province considered a heartland of Taliban support. "If people elect you dog catcher, then I would say you really have a power base. Guns are not the basis of power."

The Taliban had ruled Afghanistan until a U.S.-led coalition ousted the group in 2001. Despite the Americans spending an estimated $900 billion on the Afghan conflict since then, the Taliban are now at their strongest since being ousted from power. The group controls or contests about half the country and regularly stages attacks in Kabul.

Information for this article was contributed by Susannah George, Haq Nawaz Khan and Sharif Hassan of The Washington Post and by Eltaf Najafizada of Bloomberg News.