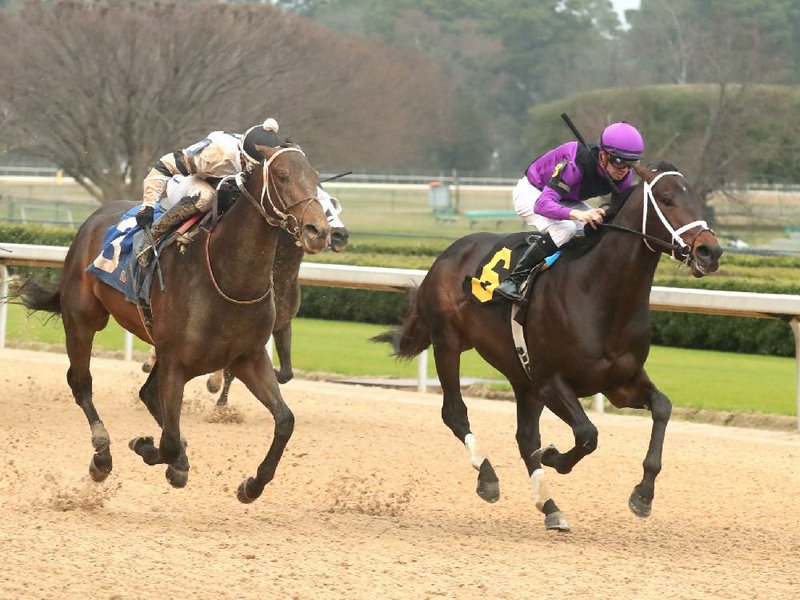 HOT SPRINGS -- Warrior's Charge had to hold off a charge in the Grade III Razorback Handicap.

"Obviously, he set some nice hot fractions and was able to continue with a nice run down the lane," Cox said.

The significant challenge came late from Bankit, the 4-1 second choice trained by Steve Asmussen and ridden by Ricardo Santana.

Bankit was in fourth, 11/4 lengths off the lead through three-quarters but passed Joevia and Pioneer Spirit as he approached and engaged the leader at the head of the stretch.

"When [Warrior's Charge] saw that other horse coming down the lane, he fought very hard to the wire," Geroux said. "It was great. When he saw the other horse, he showed a lot of fight. He was very close, and I saw him, too. He was almost too close."

Geroux and Cox both had approached the afternoon of racing with heavy hearts. Earlier in the morning, while in training at Oaklawn, the Cox-trained undefeated 3-year-old filly Taraz suffered a fracture of her left front pastern so severe the injury was deemed fatal. She was consequently euthanized.

"When you have a filly like that, you have high hopes," Geroux said. "She was really, really special. This morning, it was very sad news for us. Sometimes it's like that in horse racing. A few hours later we win a big one like this, but it does not help. With a horse like that, you dream. It's no secret."

Cox said he had set the Razorback as the probable next start for Warrior's Charge since his last, an optional-claiming 1 1/16-mile win at Fair Grounds in New Orleans on Dec. 18.

"[The Razorback] worked out well," Cox said. "We were obviously two months off the races, and he stepped up and ran really well."

"Our goal was to run here in the Razorback and then point toward the Oaklawn Handicap [on April 18]," Cox said. "He's a horse we feel like needs time between starts."