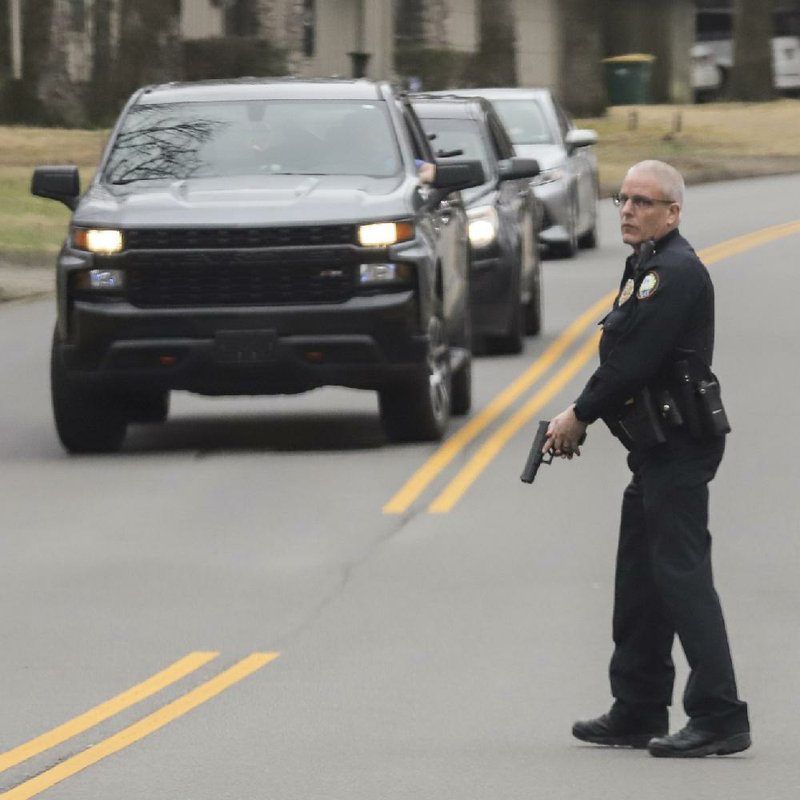 A Little Rock police officer keeps an eye out Monday near Platte Valley Drive and Arkansas Valley Drive in Little Rock’s Pleasant Valley neighborhood. Three people were arrested in the area after a brief car chase. The three are accused in a rash of vehicle break-ins over the past weekend. (Arkansas Democrat-Gazette/John Sykes Jr.)

Little Rock police investigating a series of vehicle break-ins over the weekend arrested three suspects, ages 15 to 17, on Monday after a brief chase in a stolen car.

Police have charged two of the suspects with a litany of theft and burglary offenses. The third suspect faces a fleeing charge. He was apprehended by a police dog when he did not surrender, police said, and suffered minor injuries.

Little Rock police spokesman Eric Barnes said the city has experienced a slight uptick in reported burglaries and break-ins so far this year.

According to an arrest report, detectives located the suspects and the stolen vehicle on Meredith Court in northwest Little Rock around 11:30 a.m.

An officer observed the vehicle leaving the area and followed, requesting that other police vehicles move in and initiate a traffic stop. The driver realized he was being followed and accelerated, the report said, and the officer began pursuing the vehicle with lights and siren activated.

The officer abandoned the chase a short distance away on Pleasant Valley Drive "due to the speed of the vehicle," the report states. After cresting a hill, the officer saw that the suspect's vehicle had crashed into a pole and stopped.

The three suspects were spotted fleeing the vehicle, according to the report.

According to the report, two of the suspects were taken into custody without incident, but a third suspect, "due to being non compliant with the K9 handler's instructions to surrender," was apprehended by the police dog, the report states.

The 17-year-old suspect apprehended by the dog was charged as a youth with fleeing and refusal to submit to arrest. Barnes, the Little Rock police spokesman, said the suspect's injuries were minor scrapes on his wrist, and he was provided medical attention.

Another suspect, Darron Frazier, has been charged as an adult.

He pleaded innocent to all charges during his arraignment Tuesday morning in Little Rock District Court, records show.

Pulaski County Chief Deputy Prosecuting Attorney John Johnson told the Arkansas Democrat-Gazette that he could not comment specifically on the charges against Frazier.

The third suspect, age 15, faces many of the same charges as Frazier, with the exception of theft by receiving and one of the fraudulent credit card counts, according to the arrest report. He has not been identified.

The stolen vehicle used in the car chase, a Kia Optima, was impounded. According to the arrest report, detectives recovered from the car several items that had been stolen during auto break-ins over the weekend.

When asked how detectives can attribute as many as 15 breaking-and-entering incidents to the three suspects, Barnes said each was pursued on a case-by-case basis. Detectives reviewed a lot of surveillance video as evidence and conducted interviews, he said.

"To be able to make each one of those 15 cases, there's something that the detectives have been able to link to the particular person," Barnes said Tuesday.

The vehicle break-ins over the weekend were scattered throughout western parts of the city, Barnes said. Three of the break-ins occurred at 12 Crossings Court, he said, an address near the Shackleford Crossings shopping center just east of Interstate 430.

Little Rock has seen about a 13% increase in breaking-or-entering reports compared with this time last year, Barnes said, a category that includes burglaries of businesses, as well as vehicle break-ins.