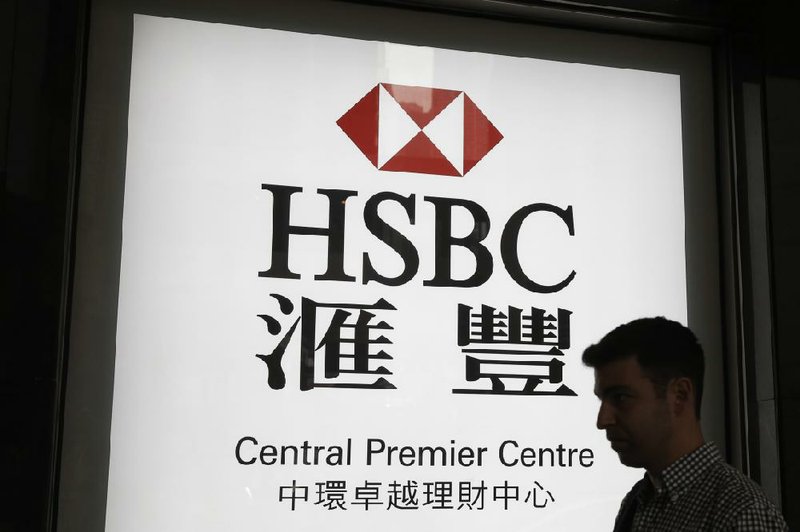 FILE - In this May 4, 2018, file photo, a man walks past a branch of HSBC bank in Hong Kong. Europe's biggest bank has reported that its net profit fell 53% in 2019 to $6 billion. London-based HSBC, whose profit is mainly from Asia, said it plans to revamp its U.S. and European business and shed $100 billion in assets to improve its profitability. (AP Photo/Kin Cheung, File)

LONDON -- Europe's biggest bank, HSBC, will shed some 35,000 jobs, about 15% of its workforce, as part of an overhaul to focus on faster-growing markets in Asia.

The interim chief executive, Noel Quinn, said Tuesday that the number of people employed by the bank would fall from 235,000 to 200,000 in the next three years. Some of the reductions would come from attrition as opposed to outright cuts.

HSBC, which is based in London but does most of its business in Asia, is caught among myriad uncertainties, from Brexit to the Hong Kong protests and trade disputes between the United States and China. Now the new coronavirus is adding further concern as it disrupts business in HSBC's main market.

The bank's net profit fell 53% to $6 billion in 2019. For this year, the bank warned of "significant disruption" to its operations because of the outbreak of the virus in China.

HSBC's business in Europe is also under pressure. It must now also grapple with Britain's departure from the European Union and the uncertainty that will accompany negotiations on future trade relations.

"No trade negotiation is ever straightforward," HSBC said in a statement. "It is essential that the eventual agreement protects and fosters the many benefits that financial services provide to both the U.K. and the EU."

The headcount drop comes amid a downsizing in Europe. The restructuring involves "consolidating" some parts of the business and "reorganizing the global functions and head office," Quinn said.

The bank has been carrying out a corporate overhaul designed to boost profitability by focusing on high-growth markets in Asia while shedding businesses and workers in other countries. It plans to revamp its U.S. and European business and shed $100 billion in assets.

"Our immediate aims are to increase returns, create the capacity to invest in the future, and build a platform for sustainable growth," Quinn said in the statement.

In the short term at least, the plan faces plenty of challenges. While the bank said the Hong Kong business showed "resilience" in the fourth quarter after months of pro-democracy demonstrations in the city, it still expects more provisions this year.

"The scale of any slowdown is difficult to forecast at the moment," said Alan Beaney, CEO at RC Brown Investment Management, which holds HSBC shares. "This will be rapidly reversed once the spread of the virus is under control -- factories and business will quickly make up the lost production. The question is how long this is going to take."

In the most extreme scenario, in which the virus is still a concern in the second half of 2020, the bank could see $600 million in additional loan losses. The effect won't be anywhere near that in the first quarter, Chief Financial Officer Ewen Stevenson said on a conference call. Stevenson said earlier in a Bloomberg Television interview that some customers in Hong Kong are "obviously struggling" in retail and real estate, but so far the "credit matrix continues to be pretty robust."

The sharp drop in 2019 profit reflected slower economic activity but also a $7.3 billion write-down for HSBC's Global Banking and Markets and Commercial Banking divisions in Europe. Revenue rose 5.9% in 2019 to $55.4 billion.

The bank said it would shrink its sales and trading and equity research in Europe and shift resources to Asia. In the U.S., HSBC plans to expand its international-client corporate banking business.

HSBC's troubles reflect those of the wider banking industry, which is under pressure from low interest rates around the world. Banks tend to make less money when rates are low, putting a squeeze on their lending business.

In Europe, many banks are still dealing with problems left over from the financial crisis. Deutsche Bank posted a loss for 2019 and is also restructuring and cutting thousands of jobs. Banks in Italy are still chipping away at a mountain of bad loans. Banco Santander, based in Spain, relied on profits from Latin America to make up for losses in Europe.

Richard Hunter, head of markets at financial services firm interactive investor, said in a note to clients that there are "few if any signs on the horizon of an uplift" to the profit-squeezing period of low interest rates.

"There remain more questions than answers as HSBC looks to overhaul its business in radical fashion," Hunter wrote.

Information for this article was contributed by Danica Kirka and Elaine Kurtenbach of The Associated Press and by Alfred Liu and Stefania Spezzati of Bloomberg News.