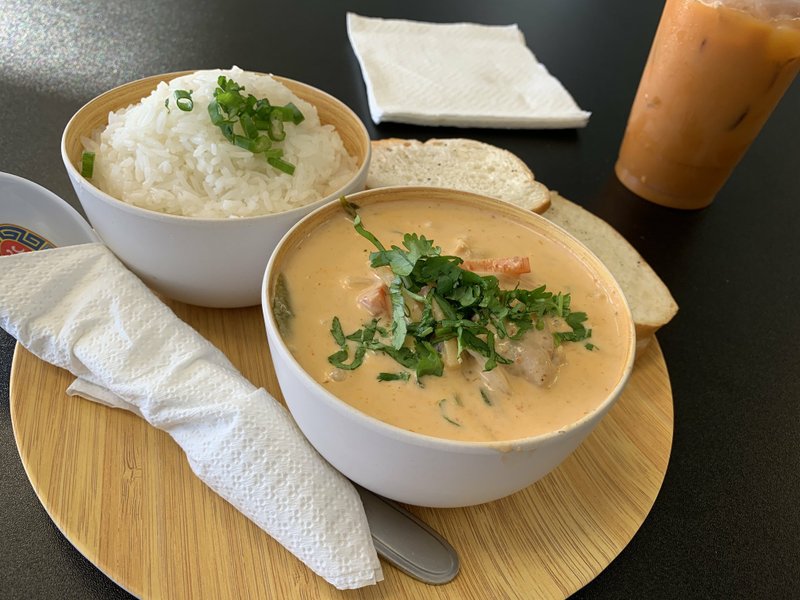 The Hybrid Kitchen is truly an apt name for the restaurant that took over the space previously occupied by Flavours on Crystal Hill Road, in a strip center just on the North Little Rock side of Maumelle.

Lots of places call their cuisine "Asian fusion"; at Hybrid, they put it into practice. The menu is a not just a roundup of various Asian cuisines but in some cases true fusions of different versions of the same dish. Everything we tried came in ample (or bigger) portions.

The tiny dining room seats a couple dozen at standard composite tables with plastic chairs (except for the "luxury" table in the back corner, where the two chairs are oversized and red-vinyl-padded). A couple of Asian-accented artworks provide an accent to the otherwise modest decor.

In the few weeks they've been open, those who run Hybrid have properly been taking things slowly, expanding the menu one item at a time, on average one item a week, the range of offerings growing to nine as of our last visit.

Everything we tried was excellent or better, starting with The Hybrid's Pho ($9.99), for which the name is doubly appropriate, as we are told the kitchen has blended Vietnamese and Cambodian recipes. Intrepid Companion, for whom pho is a go-to favorite and who is therefore very picky about it, pronounces this one of the best she's had. The broth is rich and flavorful, with plenty of "floaters" — firm meatballs, sliced beef (not as thin as we've seen, and also slightly tough), vegetables and thin noodles. Our server brought out the standard peripherals (bean sprouts, cilantro, basil leaves and lime slices) separately and a little late, explaining that many customers don't want them. (Asking first could help.)

In the same soupy vein, Hybrid's ramen ($11.99) featured a light beef broth that we thought was a little on the bland side but chock-full of thick chunks of pork belly (roasted, certainly, though we wouldn't, as the menu does, call them "charred"), two halves of a hard-boiled egg, and just the right amount of curly ramen noodles (so we didn't, hardly, waste any).

We hereby rave about the Chicken Panang Curry ($8.99), marinated chicken chunks in a moderately spiced red coconut curry broth (the server estimated it would be on 5-6 on a 10-point spicy scale, and we went with that. It was pleasantly vigorous to the point of light nose-running but without flaming the oral cavity) with bamboo shoots, red bell peppers and a side of white rice in an equivalently sized bowl. It was at least as good as we've had.

The trick with Chicken Fried Rice ($7.99) — jasmine rice (longer-grained basmati is an available option) with chicken chunks and shredded egg — is to make sure it stays interesting all the way through, and Hybrid's blend of herbs and spices performed admirably. It was still just as tasty as cold leftovers.

We look forward to going back to try the Korean BBQ Street Tacos ($7.99), which looked really good on other customers' tables, and the Beef Lok Lak ($9.99), a Cambodian-origin dish featuring stir-fried beef, onions and green and red bell peppers with sliced cucumbers, rice and lettuce and a side sauce of salt, pepper and lemon. We probably would also enjoy the Cheeseburger Eggrolls ($6.99), at which we have so far looked askance. The latest menu addition, not priced, was a quesadilla with customer choice of fillings.

Hybrid does not serve alcoholic beverages, to the possible dismay of diners who don't believe in consuming Southeast Asian food without beer, but they do offer a range of flavored teas, Thai teas and bubble teas, along with canned American sodas and a canned yerba mate tea. The plates and beverage cups are of plastic similar to Melamine, except for the Thai tea, which comes in 16- or 24-ounce plastic cups with a lid. We recommend caution, because ours leaked and that stuff, a bright vermilion when the milk has suffused the sweetened tea, has a significant potential to stain.

On our first visit, at an off-peak hour, one of the kitchen crew emerged to take our order and serve our food. An actual server took care of us on our second visit; on our third, during a busy lunch rush, we had slight delays in drink delivery and getting our food out of the kitchen.