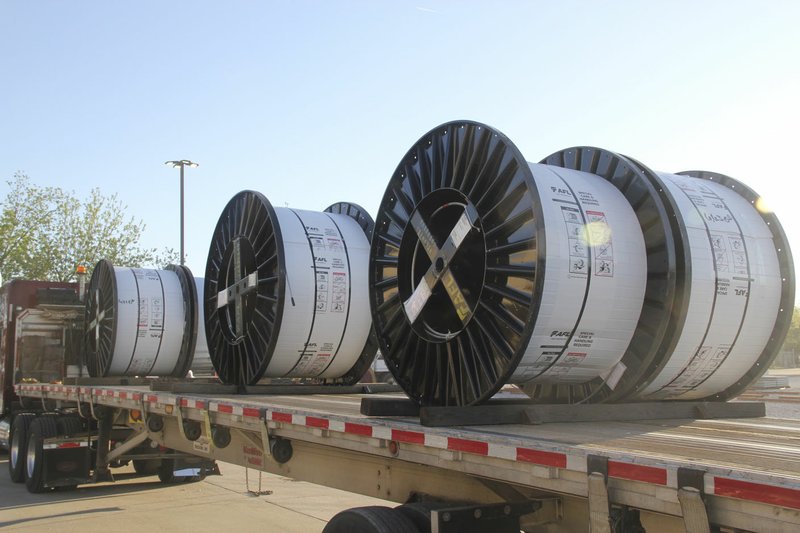 Courtesy Photo/OZARKS ELECTRIC COOPERATIVE Miles of fiber-optic cable waits to be installed for OzarksGo, Ozarks Electric Cooperative's upcoming broadband network. The cooperative expects the network to become available to its first customers before the end of the year.

Proposed guidelines for a $25 million rural broadband development program sailed through legislative review on Wednesday, bypassing many of the earlier concerns from lawmakers who feared that some of their constituencies would be left out of needed funding.

The Arkansas Rural Connect Broadband Grant Program was announced with fanfare by Gov. Asa Hutchinson last summer as part of his administration's plan to expand high-speed internet access to all communities of 500 or more people by 2022. Soon, however, some legislators began asserting that the program was not expansive enough to help the smallest communities in the state.

After a series of public meetings last fall, the state's broadband office agreed to rework the framework of the program, specifically in relation to rules that limited grants to incorporated communities.

Under the new rules presented to lawmakers on Wednesday, both unincorporated communities and counties would be eligible to receive grants from the program.

"We took it back, we rewrote the rules, we put them out for public comment and the things that you guys wanted to see changed we were able to change," state Broadband Manager Nathan Smith told a panel of lawmakers Wednesday.

"There is no predetermined list of areas with eligibility or communities," Smith added. "We opened this up and want everyone to be competitive, to come and to bid for this application process."

The panel, the Administrative Rules Subcommittee, made no objections to the modified rules. Before the rules can take effect, they must still undergo a review by the full Legislative Council on Friday.

Sen. Missy Irvin, R-Mountain View, said after the meeting that while some of her previous concerns had been addressed, "more work needs to be done."

"The changes that were made to this state program for deployment were really important," Irvin said. "I think it's important to know when you're laying infrastructure, when you're spending state dollars, it's going toward deployment."

According the website BroadbandNow.com, Arkansas ranks 48th among states in internet connectivity. While about 92% of Americans as a whole have access to broadband, only about three-quarters of Arkansans have similar access, the website found.

"There's this perception out there that we're barefoot and have no Wi-Fi," Smith said. "The more that people see these lists and that we're not doing anything about it, that perception becomes reality."

In a statement release by his office Wednesday, Hutchinson said the panel's decision to move forward with legislative review of the program expresses a "commitment to accelerating" the state's rural broadband development.

"The approval of the grant rules today sets the stage for our communities to leverage both state and federal money to fund projects that will meet this essential need of our rural residents," the governor's statement read. "I look forward to working with the General Assembly to complete the funding needed for this critical program during the fiscal session."

During the 2019 legislative session, lawmakers passed Act 198, which removed the prohibition on local governments providing broadband services and infrastructure. At a January legislative hearing, the sponsor of that law, Sen. Breanne Davis, R-Russellville, criticized the state's grant program for not focusing attention on previously available federal grants.

Davis, who is not on the Legislative Council's Rules Subcommittee, did not attend Wednesday's meeting and could not be reached for comment afterward.