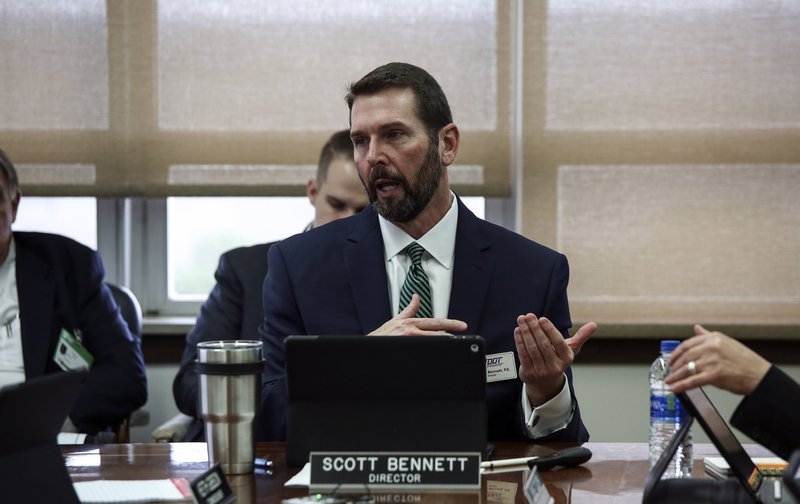 After overseeing many significant highway rehabilitation programs throughout his nine-year stint as director, Scott Bennett announced Wednesday that he will retire as head of the Arkansas Department of Transportation.

Bennett, 54, informed the Highway Commission of his decision in a letter, in which he stated his last day would be March 20.

Described by Commission Chairman Tom Schueck as a "visionary" and a "great communicator," Bennett steps down after almost 32 years with the department.

"I've had a great career ... and I've been fortunate to be a part of many success stories," Bennett said in a statement, "but it's time for me to step down. I've always been told, 'You'll know when it's time,' and I believe that time has come for me."

Bennett, whose annual salary is $229,944, led the department's efforts to implement the 2011 Interstate Rehabilitation Program and the 2012 Connecting Arkansas Program, both of which were approved by voters. In November, Arkansas voters again will decide whether to approve a half-percent sales-tax proposal for road and bridge improvements.

"We have put together a great construction and maintenance program that will serve the citizens of this state for decades to come if the people support [Gov. Asa Hutchinson's] plan in November," Bennett said in the statement.

"I appreciate the years of dedicated service of Director Bennett to the Arkansas Department of Transportation and his commitment to improving our roads and bridges," Hutchinson said in a statement released by his office Wednesday night. "I wish him well in his next endeavor."

"There is no question this agency has progressed under his leadership," Ort said.

"It's been a privilege to work with Scott," Schueck said. "The people of Arkansas have been well-served with Scott Bennett leading the Department of Transportation."

Bennett, a native of Blytheville, began working for the department in 1989 with the Planning and Research Division. He earned a bachelor's degree in civil engineering at the University or Arkansas, Fayetteville and obtained his master's degree while employed with the state. He held various engineering and management positions before being named director in 2011.

In his written statement, Bennett acknowledged all the people who guided and assisted him as he moved up the ranks and eventually oversaw a department that regularly was in transition.

"I've been fortunate to have been part of a great team and surrounded by so many capable and talented people throughout my entire career," Bennett said.

"Any success I've had have been the result of the efforts of many," he continued. "I couldn't and didn't do this job by myself. It's been a tough decision to leave, but in my heart, I know it's the right one."

Schueck said the commission will meet as expeditiously as possible to consider Bennett's replacement.