Trump pulls in cash, fires up base during Day 2 of visit to U.S. West 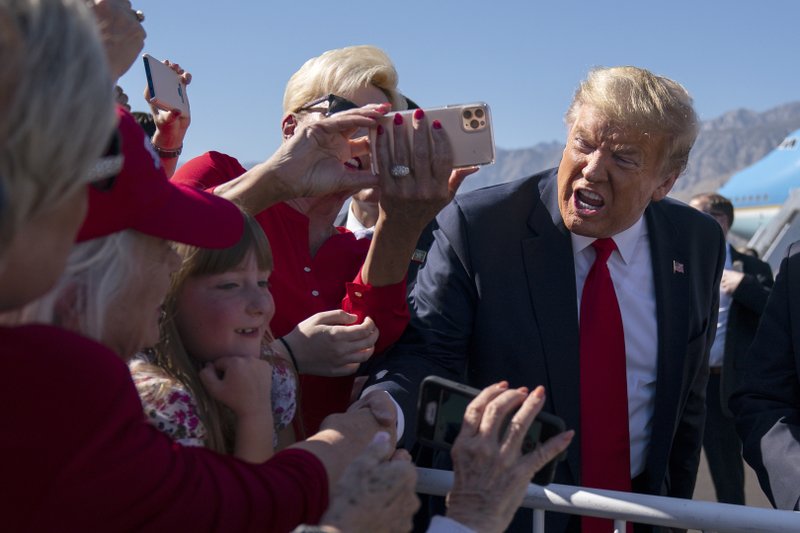 BAKERSFIELD, Calif. -- President Donald Trump is using Day 2 of his swing out West to check off the quintessential to-do list for a president seeking reelection: raising tons of campaign cash, delivering on policy for supporters and revving up his base.

It's an unusually long domestic trip for Trump.

He's sleeping each night at his own hotel just off the Las Vegas Strip and making day trips to California, Arizona and Colorado.

The visit places Trump in Nevada just as the Democratic candidates seeking to replace him are campaigning in the state ahead of Saturday's party caucuses.

The Democrats' Wednesday night debate in Las Vegas was scheduled to begin just as Trump will be speaking to his supporters at a rally in Phoenix.

Trump didn't wait until evening to start his counterprogramming, weighing in on his Democratic rivals via Twitter.

He called former New York Mayor Mike Bloomberg a "pathetic debater" who "doesn't respect our great farmers" and accused him of using his campaign cash to make "'payoffs' all over the place." Bloomberg, who made his maiden appearance Wednesday night on the Democratic debate stage, has spent hundreds of millions of dollars on campaign ads attacking the president.

Trump began his day with an unscheduled stop at a fundraiser in the lobby of his hotel, where his son, Donald Trump Jr., was the headliner. Then he hopped over to the Rancho Mirage, Calif., estate of billionaire Oracle co-founder Larry Ellison to raise more cash. The estate includes the Porcupine Creek private golf club, the site of a Trump campaign golf outing and fundraiser.

The president was expected to raise $7 million at the fundraiser, according to a Republican official familiar with the planning of the events but not authorized to speak about it publicly. Trump raised a similar sum Tuesday night in Beverly Hills. That money will be split among his campaign, the Republican National Committee and 22 Republican state parties.

California Republican National Committee member Shawn Steel said Wednesday that the president used his Beverly Hills event to talk at length about how he ignored common wisdom and targeted Michigan in the 2016 election, despite its history of siding with Democratic presidential candidates in recent decades. Trump narrowly carried the state over Hillary Clinton.

Echoing his tweets, the president predicted that voters would be alienated by Bloomberg's spending and see him as a "guy trying to buy his way in," Steel said. Trump also predicted that the Democratic establishment would do its best to stop candidate Bernie Sanders like it did in 2016, Steel added.

Trump did have a policy component to his schedule for the day -- a visit to Bakersfield, Calif., the hometown of House Republican leader Kevin McCarthy. The president signed his administration's reworking of environmental regulations that will direct more of the state's water to farmers and other agriculture interests in the Republican Central Valley stronghold.

During his 2016 campaign, Trump was an outspoken critic of federal rules meant to ensure that enough fresh water stayed in rivers and the San Francisco Bay to sustain more than a dozen endangered fish and other native species, which are struggling as agriculture and development diverts more water and land from wildlife.

"As a candidate for president, I promised to help solve the water crisis that was crippling our farmers due to the chronic mismanagement and misguided policies," Trump told a crowd in Bakersfield. "In 2018, I ordered the administration to update the outdated scientific research and biological opinions that help determine water allocation right here in the state of California. ... With today's action we will help bring farmland back to life."

Trump also used the event to take another swipe at Bloomberg, who was criticized in 2016 for saying at Oxford University, "I could teach anybody, even people in this room, no offense intended, to be a farmer." The former New York mayor continued: "It's a process. You dig a hole, you put a seed in, you put dirt on top, add water, up comes the corn."

"Mini Mike hates the farmer," Trump said. "Never mind, I don't think he's going to be the candidate anyway, to be honest with you."

Information for this article was contributed by Ellen Knickmeyer and Michael R. Blood of The Associated Press.

Print Headline: Trump pulls in cash, fires up base during Day 2 of visit to U.S. West