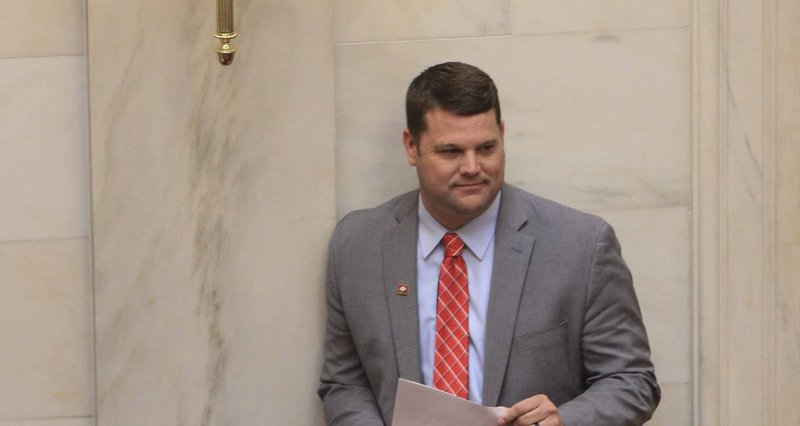 Sen. Bart Hester, R-Cave Springs, is shown in this photo.

A top Republican in the Arkansas Senate and noted critic of rulings by the Arkansas Supreme Court in recent years criticized the high court again Friday, accusing it of being "a friend of the child rapist."

Majority Leader Bart Hester of Cave Springs made the remark Friday during a Legislative Council hearing over a number of state contracts, including a $1.25 million contract for architectural services for an addition to the Justice Building in Little Rock.

Speaking on the proposed expenditure, Hester, who is in the real estate and construction business, referred to the court's decision last year to overturn the conviction and death sentence of a Bella Vista man, Mauricio Alejandro Torres, who was accused of sodomizing his 6-year-old son with a stick while on a camping trip in Missouri. The son later died at a medical clinic in Arkansas of a bacterial infection from his injuries.

"It's not lost on me that the state of Arkansas is spending $350,000 right now on Benton County retrying a man that admitted to raping and murdering his son and it's not that he didn't do it, that he did do it," Hester said. "The Supreme Court found in their infinite wisdom that they weren't sure where he did it and where he ended up letting his son die, that this is somehow really confusing."

In a 4-3 majority decision handed down last April, the court ruled that prosecutors could not rely on the underlying crime of rape to support Torres' capital-murder conviction and death sentence, because the purported rape occurred in Missouri, outside of the state's jurisdiction.

The court remanded the case for a new trial, and prosecutors are again seeking the death penalty against Torres, who is being held in the Benton County jail.

Hester did not attempt to place a hold on the contract for the Justice Building, which houses the Supreme Court's offices and chambers. The contract passed Legislative Council review without any other objections.

Capping off his comments at Friday's hearing, Hester said, "I recognize that the Supreme Court of Arkansas is a friend of the child rapist, this legislator is not."

Those comments drew rebuttals from judicial leaders as well as from the Arkansas Bar Association. Other Republican legislative leaders, meanwhile, were tempered in their response.

Told of Hester's comments, Kemp's predecessor as chief justice, Howard Brill, said in an email Friday that it was "inappropriate, indeed outrageous" to make such a suggestion.

"Judges take an oath to uphold the Arkansas and United States constitutions," Brill said. "Those constitutions, approved by the people, provide protections for all persons, including those accused of hideous crimes."

Arkansas Attorney General Leslie Rutledge, a Republican who represents the state in criminal convictions appealed to the Supreme Court, also on Friday defended the court's autonomy.

"While I am disappointed with court decisions at times, these decisions from the courts are part of the checks and balances our founders established," Rutledge said.

"I have heard people called all kinds of things in campaigns by legislators and by candidates," he said. He said Hester's remarks were "unusual" for a Legislative Council meeting.

House Speaker Matthew Shepherd, R-El Dorado, said, "I think that as legislators, just [as] any citizen, we are entitled to our opinions and we can speak those opinions, and while one opinion may not be something that I necessarily share or another legislator [shares], everybody has the freedom to speak their mind."

"If the senator had some questions, I would go to the Supreme Court and ask the questions," Ingram said. "But in a Legislative Council meeting, I've never heard anything quite like that."

It was not the first time that Hester, who has served in the Senate since 2013, criticized the court's decisions.

In early 2017, after the state Supreme Court ruled to block a portion of the executions planned for that spring, Hester tweeted out that the court was "siding w/ murderers." He included the personal cellphone number of Kemp, whom Hester urged his followers to call.

A year earlier, Hester wrote a guest column in the Arkansas Democrat-Gazette criticizing the court for striking down a proposed constitutional amendment to place limits on certain lawsuit damages. The court found that the term "non-economic damages" was not well defined in the proposal for voters, causing Hester to write that he was "embarrassed for our high court for using such baseless logic."

In his comments Friday, Hester also mentioned another death-penalty case recently heard by the Supreme Court involving child killer Karl Roberts. Roberts was sentenced to death for the 1999 killing of Andi Brewer, whose mother, Rebecca Petty, now is a Republican state representative from Rogers.

Hester suggested Friday that Petty's recent decision not to run for another term is because of the court considering arguments by Roberts' attorneys that he is schizophrenic and should not be eligible for the death penalty.

The Supreme Court rejected those arguments and Roberts' appeal by a 6-1 decision last month. Hester did not mention that decision while speaking Friday.

"We are losing a state representative because the Supreme Court found that the guy that kidnapped, raped and murdered her daughter had a bike wreck when he was [a] 10-year-old and that's really confusing to them now, so now she has got to go take care of her daughter," Hester said.

Hester stood by his comments later Friday afternoon, saying that they had been made deliberately to draw attention to the court's "activism" on death-penalty cases.

"I didn't make these comments by accident," Hester said. "The people of Arkansas need to know. They need to know how weak the Supreme Court is on issues that they firmly believe differently on."

Hester has announced plans to run for Senate president pro tempore for the 93rd General Assembly, from 2021-23.

Sen. Jim Hickey, R-Texarkana, said Friday that he also plans to run for the same post.

Asked about Hester's comments, Hickey said, "There is not a member of the Senate or House whose heart does not break for Rep. Petty.

"She has endured something which is beyond the imagination of any of us parents who have not walked in those nightmarish shoes," he said in a written statement. "Senator Hester was also clear that he was speaking for himself. However, I strongly disagree with his comments. The judicial branch, whether through the Supreme Court or a District court, are literally dealing with thousands of issues with much detail in a society which is sometimes unsettling to say the least. It is incumbent upon us as senators and legislators to show respect for this branch of government in the same way as we wish them to show it to us as the elected legislature." 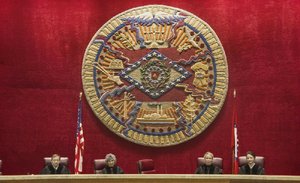