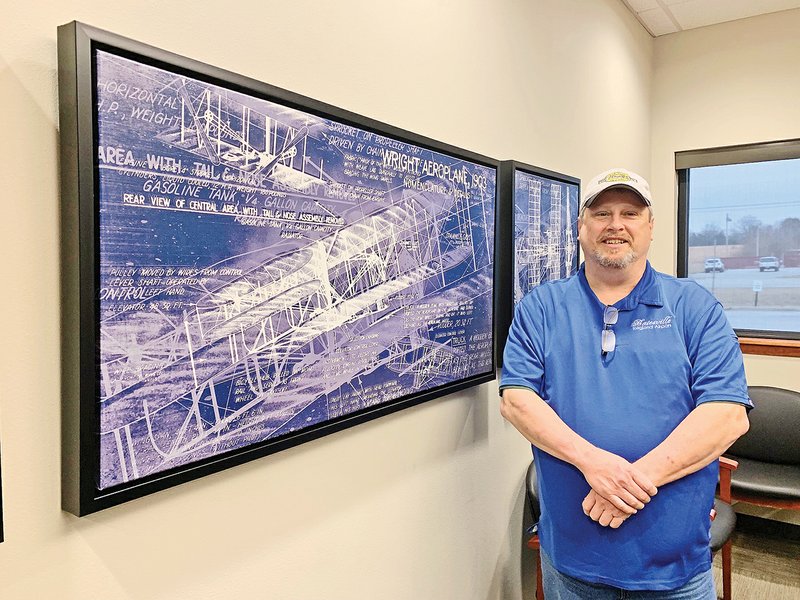 Darren Wilkes stands inside the terminal of the Batesville Regional Airport. Wilkes grew up at Cave Creek, attending Cave City Schools, before graduating in 1984.

BATESVILLE — Darren Wilkes didn’t set out in life to run a city-owned airport, and after getting out of the Air Force, his career path took him under the city rather than over it — that is, until 21 years later when the Batesville Regional Airport had a job opening.

Wilkes, 53, is retiring after serving nine years as manager of the Batesville Regional Airport. A retirement reception will be held in Wilkes’ honor from 11 a.m. to 3 p.m. Friday at the terminal.

“Even as a kid, I always wanted to fly,” he said. “I was putting wings on go-karts and mini-bikes and everything else. Never could get off the ground, but at least I looked cool going through the yard, in my mind.”

More than once he found his limbs colored with Merthiolate or the purple antiseptic spray his parents used on the hogs.

But if he was outside, the planes going overhead would capture his attention. Once he couldn’t see them anymore, he’d go back to what he was doing.

After high school, he got married and became a self-employed auto-body man.

“My dad had a garage, and my mother had an upholstery shop, so I wanted to do body work,” he said. “I just thought it was a natural fit and grew up loving it. While I was at it, I liked to have starved to death, so I went to work for Daniel Construction at Eastman. I worked out there in the ditches during the day putting pipes in the ground. Then they promoted me to an electrician’s helper, so I went up on the stilts and ran conduit and wires. It was tough in the ’80s. Interest rates were high, and minimum wage was about the highest paying job you were gonna get, at $3.35 an hour,” he said with a laugh.

“My wife was working at First National Bank at the time, and she was making a whopping $3.85 an hour. We thought we were in tall cotton — until we went to get a house.”

The couple ended up building a house in Spring Valley, but construction projects slowed to the point that Wilkes said he couldn’t work enough hours in the day to stay afloat.

“I wasn’t much of a jarhead, and I didn’t like to walk, so that left the Army and the Marine Corps out,” he said, laughing. “So I joined the Air Force.”

He said he wanted to learn a trade outside the automotive industry.

“The Air Force saw fit to put me in the Air Force armament on B-52s, but there’s not a lot of civilian call for that.”

He served his four years but got out because he couldn’t relate his work to civilian life, and he said he had a bad commander who “kinda soured me on it. So I just came on back home and tried to eke it out where I was happy.”

He said most of his traveling during his time in the Air Force pretty much consisted of “going from one side of the base to the other — and the chow hall.”

“We did a few little deployments, but nothing serious. It was like a day or two here and there,” he said.

“I went in when I was 19 years old and turned 20 when I was in basic training. I got used to the structure,” he said. “I was not used to that when I went in, and when I got back out, I had to learn to apply that structure to my own life. The biggest thing I gained was, I went off and grew up — go off a kid, and come back a man.

In 1990, Wilkes went to work at the wastewater treatment plant, hired as a temporary employee to work on a project rebuilding filters at the plant.

“When we finished that project, some other people had quit, and [Eugene Townsley, plant superintendent], asked if I wanted to stay on, and I thought I’d give it a shot. I worked 19 years down there,” Wilkes said.

When the job for airport manager came open, Wilkes met with the commission, promising that the airport “would be better when I left it.”

He kept his word, as the airport has completely renovated its terminal, for one thing.

“We get compliments on it daily,” Wilkes said.

The terminal project was started in 2015 and finished the following year. The parking was redesigned to include additional spaces, too.

“Our runway, we’re cutting more grass out here than we’ve ever cut, so it looks more appealing from the sky. … We just got through seal-coating and restriping. We did what we affectionately call ‘the big dig’ in 2013 or ’14, when we moved about 380,000 cubic yards of dirt. We had to put in 1,000 feet on the west end of grading, so if [the pilots] miss the runway and go long, they’re not going to just go upside down in the weeds. We got 1,000 feet added [to the other end of the runway].”

The Federal Aviation Administration also wanted an additional safety area around the property, and the airport requested — and received — funds to finish its perimeter fence.

“They gave us an extra $400,000 to run about 4 1/2 miles of chain link around the perimeter. That’s a lot of fence. That’s a lot of spraying weeds, too, and mowing,” he said, explaining that it helps cut down on wildlife running out onto the runway, or at least it helps the pilot better see the animals.

“The deer can jump over, and the coyotes can go under [the fence],” Wilkes said. “Since we’ve done that, we haven’t had any pilots hit any animals. We did have one guy hit a turkey prior to the big dig; it flew up and hit a wing strut on his airplane. No harm, no foul, and he got to eat the bird. We had another plane land and run over a coyote that was on the runway.”

But the airport also used dirt to fill in low spots to make room for additional private hangars, as well as five T-hangars that the airport owns.

He said jet-fuel sales have increased dramatically in the past nine years.

“When I arrived, we might sell 1 gallon of jet fuel for every 5 gallons of avgas; now it’s about 10 to 1, the other direction. We’ve got the same runway — it’s just nicer now, and people want to come here. It’s all open, and everybody can see it. It meets the FAA safety requirements, so the people’s insurance lets them come in here. We’ve got a nice facility, and Batesville’s economy is picking up a little.”

NetJets, a private jet company, also uses the Batesville airport. Wilkes said member pilots can purchase an interest, which gives them so many hours of flight time a year.

“Whatever size plane you require, they’ll bring it,” he said. “The Gulfstream G4 and the Global Express are the largest two that come in here right now.”

The airport has about 100 takeoffs/landings each week.

Wilkes said he has worked to get a commuter airline to make a stop in Batesville one or two days a week, but that hasn’t happened yet. Jonesboro, for instance, has flights to St. Louis and Destin, Florida; Mountain Home has flights to Dallas.

“If we could hook up to one of those where you could catch a commercial flight and go somewhere, I believe it would be used,” Wilkes said. “We get calls two or three times a day, or people come up to the counter and say, ‘I need a ticket to wherever.’ … It’d be cheaper on the customer than going to [a larger] airport and leaving your car for $200 a week or whatever it is.”

Wilkes said he’s had his share of memorable days on the job.

“We’ve had everything from people complaining about drones shooting out their water heaters to aircraft coming over in the contrails that you see in the sky. A guy told me those are nanites being dropped down to change our DNA. He came up here, and we met face to face, and he wouldn’t go away. Finally, I told him that was condensation, and you know it, and I know it, and everyone else knows it.”

The man replied, “Nope, that’s not what that is. They’re spraying us.”

“He kept on and on: ‘Those government fools are poisoning us,’ and I said, ‘Who do you think I work for?’ The man ran to his car, pulled out into traffic [so fast], I thought he was going to kill himself driving off. He spun the tires, and down the road he went — he thought I was one of them!”

Wilkes said another man came to the airport and said he was being spied on by drones.

“His ex-wife was connected to military and everything else; they were using the drones and shot his water heater plumb out of his house trailer. He wanted me to stop the drones. … The personalities that come in and fly an aircraft are far and wide,” Wilkes continued. “Some are funny; some are real funny, but there’s a lot of good people in aviation.”

Many are avid aviation enthusiasts.

Wilkes mentioned a pilot who flies in nearly every weekend from Cabot, buys some fuel, borrows the airport courtesy car, eats at a local restaurant, comes back, pays for his fuel and flies home.

Sure, he could drive from Cabot — it’s not that far — but “he wouldn’t get to fly, then,” Wilkes said.

He said he even wanted to put in a restaurant in the terminal when it was remodeled, and he still hopes that one day someone will do that and draw more people to the airport and the community as a whole.

“We’ve got a nice airport,” he said, noting that it is probably the nicest in the state for a town with a population of 10,000.

He said he’s become acquainted with so many people he wouldn’t have crossed paths with, otherwise, and that has been a blessing.

Wilkes said he doesn’t see his last day “so much a retirement as it is a shift in gears. I’m going to take a month or two off and fish with the Batesville Bassmasters, and I’ve got cattle. Hopefully, the cow prices will come up so I won’t have to work as hard,” he said, joking.

But he does hope to find another job, one “that will be left at work when I go home, and that’s what I’m looking forward to. This job, you’re always wondering if you did somebody wrong or made a mistake — you’re worried about safety all the time. If you screw up at this one, it can cost people’s lives. It is a big responsibility, and a lot of people don’t realize it, but I think about it all the time.”

His last day with the airport will be Saturday; Justin Thompson took over duties Jan. 1, and Wilkes stayed on to make the transition as smooth as possible.

“This is the best job I’ve ever had; it really is,” Wilkes said.