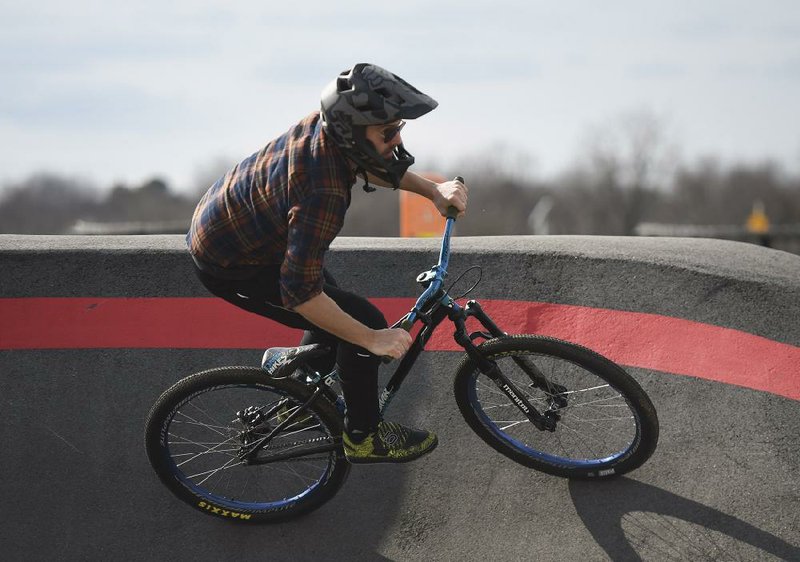 Northwest Arkansas has become a destination for mountain biking, and that has some cyclists pushing for similar opportunities in Central Arkansas.

Bicycle enthusiasts David Larson and Andrew Thomas went before the North Little Rock Parks and Recreation Commission last week and encouraged the commission to consider building a pump track at Burns Park and provided the board with construction estimates.

A pump track combines rolling jumps with high-banked turns on an asphalt surface. Such tracks are ideal for mountain bikers and BMX riders but can be used by anyone.

The idea of the track originally was presented to the commission in 2019, but the bicycle group was unable to secure a second quote for the pump-track concept by the time the 2020 city budget was finalized.

Terry Hartwick, the city's parks director, said the quotes presented Tuesday will be included on the next department agenda, but a decision on funding probably won't be made until the 2021 budget is discussed.

Sam Slaton, a bicycle enthusiast and cycle education teacher at Thaden School in Bentonville, said the idea of a pump track is to use your weight and momentum to do a pumping motion to flow over the hills, which mostly eliminates the need to pedal.

Larson said the pump track he would like to see at Burns Park is a $200,000 asphalt course designed by Velosolutions. He said the European company usually sponsors the Red Bull Pump Track World Championship at newly constructed tracks.

Other options for a track include dirt and crushed rock, but both require more maintenance, Larson said.

"Northwest Arkansas has three pump tracks," Larson said. "We are Central Arkansas, the capital city, and we don't have one."

Velosolutions created a top-of-the-line pump track for the Thaden School a couple of years ago. The company also built the pump track at the Jones Center in Springdale, which hosted the Red Bull Pump Track World Championship in 2018.

Bicycle paths and mountain biking trails have become more popular across the state after Northwest Arkansas began to see the economic benefits of investing in them.

According to a Walton Family Foundation study in 2018, bicycling provided $137 million in economic benefit to Northwest Arkansas in 2017. It also showed bike tourism was a significant economic driver for the region, with visitors spending $27 million at businesses in 2017.

Northwest Arkansas has become a popular destination for mountain bikers, drawing some of the top riders in the world to the area to compete in events such as the Red Bull events and the Oz Trails Off-Road event.

"Mountain biking is huge right now," Larson said "Road biking is falling off because of bad bike lanes and distracted drivers. When you are mountain biking, all you have to worry about is trees and rocks."

Larson said that when he goes to California -- the home of mountain biking -- he often hears from West Coast cyclists who are excited about visiting Arkansas so they can experience the state's biking opportunities.

"Northwest Arkansas has become a global destination," he said.

The Walton Family Foundation provided a $1.1 million grant to help pay for the Jones Center's bike skills park, and backed the development of Thaden School, which has made biking one of the hallmarks of its curriculum.

"In Northwest Arkansas, trails are playing a significant role in improving the quality of life by preserving open spaces and revitalizing downtowns," Jeremy Pate, a senior program officer with the Walton Family Foundation, said in an email. "Safe cycling facilities in our community provide a way for families to recreate together, to run errands and, for some, a form of transportation."

Thaden School's commitment to biking shows up inside the classroom, where students learn about design, mechanics and other aspects of bicycles. The school added its pump track in 2018 as the centerpiece of a mile-long bike-skills trail that loops the east side of campus.

"We are the first school in America to have its own pump track," said Sam Slaton, a cycle education teacher at the school. "It allows students to run around and burn off some energy before returning to class."

Slaton, a Little Rock native, worked first with Bike New York before returning to Arkansas to work with BikeNWA.

"I wanted to go back home and create the things I wish the state had when I was a kid," he said.

Slaton said he believes Central Arkansas can become a thriving area for bicyclists as well.

"We have the Ozarks, so we have a lot of topography for mountain biking, but it just means figuring out what type of bicycling is good for Little Rock," he said.

Slaton mentioned how an old mining town in Michigan reinvented itself by turning old mine shafts into a bicycle path and became a premier bicycling destination.

"Every city has the ability to embed bicycling into their communities," Slaton said. "It also allows you to build an infrastructure for people who can't drive, don't drive because of climate change, or can't afford to drive."

Larson said Burns Park also has plenty of potential to become a premier bicycle destination, but changes must be made.

"Our trails right now are open to horses and hikers, and the trails are very tight and curvy," he said. "The new wave is the flow of fast-jump trails you see in Northwest Arkansas."

Adding a pump track, expanding the mountain biking trails and fixing the ones in Burns Park can attract the attention of groups like the Walton Family Foundation, Larson said.

"The Waltons don't just come in and write big checks and walk away," he said. "They want sustainability."

Pate said the foundation hopes to inspire communities and share in the collaborative successes they have seen in Northwest Arkansas.

"We're supporting trail development in other communities, such as Mount Nebo in the Arkansas River Valley, Hot Springs National Park as well as the Delta region, because we believe Arkansas has the potential to be a national destination for all types of cycling," he said.

Larson said he doesn't think adding biking opportunities in Central Arkansas would detract from the efforts Northwest Arkansas has made, but North Little Rock can benefit from it.

"If they fly into Little Rock they might say, 'Hey, let's swing by the trails at Burns Park before heading up there,' and then they might grab a burger or something," he said. "That is a win-win situation for everybody."