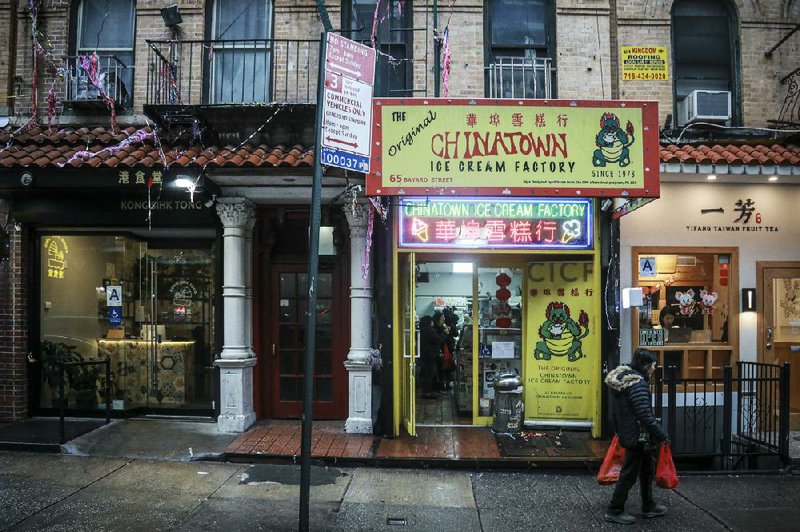 A woman earlier this month walks past Chinatown Ice Cream Factory, a neighborhood fixture owned by Christina Seid and founded by her father four decades ago in New York. (AP/Bebeto Matthews)

NEW YORK -- In Arizona, a burgeoning Asian American community fields xenophobic calls about a planned night market featuring Asian street foods. In New York, a dim sum restaurant owner worries he won't make rent. In the San Francisco Bay Area, a local Asian American-owned restaurant chain is mulling temporarily shuttering one of its properties because of the downturn in trade.

In major U.S. cities, Asian American businesses are seeing a remarkable decline in customers as fear about the viral outbreak from China spreads. City and health officials are trying to stanch the financial bleeding through information campaigns and personal visits to shops and restaurants, emphasizing that, with just 15 cases diagnosed in the entire country, there is no reason to avoid them.

Business owners, some of whom have seen their customer traffic cut by more than half, are anxiously waiting for things to return to normal.

The freshly crowned Asian District in Mesa, Ariz.,was deep into organizing its night market when news broke that a case of the illness known as Covid-19 was confirmed at nearby Arizona State University.

"I probably should stop picking up my phone altogether," Reid said. "One lady was like, 'Well, aren't people coming to your event that are the cause of it?'"

The Feb. 29 food festival, modeled after popular outdoor Taiwanese markets, was designed to get the public acquainted with the district.

"We certainly take any health crisis seriously but to make those kinds of connections is just offensive," he said.

Organizers will be handing out specially made masks with playful Asian-food theme slogans like "Bao to me" and "Insert lumpia here."

The virus has sickened tens of thousands of people, mostly in China. Fifteen people have been diagnosed with the virus in the U.S., all but two who recently traveled from China. U.S. citizens have also been diagnosed abroad, including 14 who were on a cruise ship quarantined off Japan and have been taken to hospitals in the U.S.

Vegetarian Dim Sum House has been a fixture in Manhattan's Chinatown for 23 years, but suddenly owner Frankie Chu said he will not be able to make his rent this month.

Chu said sales have plunged 70% over the past two weeks at his no-frills restaurant. Three couples trickled in for lunch on a recent weekday. Normally, Chu said he gets up to 30 customers for lunch. At dinnertime, his narrow restaurant is usually packed with about 70 diners. These days, he gets about four.

Chu has sent some of his staff on vacation to cut costs. Under the circumstances, he will ask his landlord to forgive a 5% late fee normally charged.

The crisis has alarmed New York City officials and business leaders, who have launched a campaign to lure people back to hard-hit communities in Manhattan, Queens and Brooklyn.

"Chinatown is bleeding," said Wellington Chen, executive chairman of the Chinatown Partnership, a local business and community group. "This thing is thousands of miles away. This fear is really out of proportion."

Small businesses in Manhattan's Chinatown have reported sales drops of between 40% and 80% the past month as the viral outbreak in China spread, Chen said. In Flushing, business is down an estimated 40%, according to the Flushing Chinese Business Association.

For some businesses, it's much higher. Derek Law, senior vice chairman of the America China Hotel Association, said business has dropped about 70% at a spa he owns in Flushing.

New York City is home to more than half a million Chinese Americans, the biggest population of any U.S. city. Some New Yorkers of Chinese descent are frustrated at being made to feel like foreigners because of a disease outbreak that feels as far away to them as any other resident.

"I'm probably more American than a lot of the people asking me about coronavirus. It's a little annoying, to be honest," said Christina Seid, owner of the Chinatown Ice Cream Factory, a neighborhood fixture that her father founded four decades ago with flavor offerings like mango and green tea.

Seid, whose great-grandparents immigrated to New York from China, said business has been slower than usual but added that the winter months are never good for ice cream shops. She said she feels optimistic that things will soon return to normal, relying on New Yorkers' determination to get on with life.

With no confirmed cases of the virus in New York City, officials and politicians are trying to drive home the point that there is no reason to avoid any neighborhood, with many eating at Chinese restaurants and tweeting out photos under the hashtags #supportchinatown.

In Boston, Mayor Marty Walsh has launched a similar social media campaign, encouraging people to share photos of themselves supporting small businesses in the neighborhood with the hashtag #LoveBostonChinatown.

Allison Arwady, the Chicago Department of Public Health commissioner, said she and her colleagues "continue to field rumors" about threats to public health. She said the health risk is low and urged people to not fear visiting and spending time at restaurants or stores in Chicago's Chinatown.

"Please do not allow stigma, xenophobia or fear to control your decisions," Arwady said.

In the San Francisco Bay Area, the situation is dire enough that Sunny Wong's family is considering temporarily closing one of the four restaurants it owns in Oakland's Chinatown. Even some of his friends and patrons have told him about hearing of untrue rumors of people getting sick at one of his restaurants.

"People just are clueless. They hear stories and rumors and they just don't really look for the facts in a situation," said Wong, adding that he has had to cut back hours for his workers.

Carl Chan, president of the Oakland Chinatown Chamber of Commerce, said business owners have reported a drop of roughly 50% to 75% in business. The chamber is planning a Chinese New Year celebration, with Oakland Mayor Libby Schaaf encouraging residents to patronize Chinatown restaurants.

The restaurant has seen a 40% drop in business over the past three weeks, said manager Vincent Tang, whose cousin Wilson Tang took over the restaurant from his father. Normally, the restaurant fills up at lunchtime. But during a recent weekday, nearly half the tables were empty, although it was at least busier than many of its lesser-known neighbors.

"We're lucky to have loyal customers," said Tang, sitting near a row of green stools that he used to swing around in as a child. "Usually at this time we are packed and there is a line outside."

Customers at Nom Wah said they were perplexed that others were staying away.

"It didn't cross my mind at all," said Kate Masterson, an artist digging into dumplings with her uncle at a booth beneath signed framed photographs of celebrities such as Kirsten Dunst.

"It's not happening here," she said of the outbreak.

Information for this article was contributed by Noreen Nasir and Terry Chea of the Associated Press.