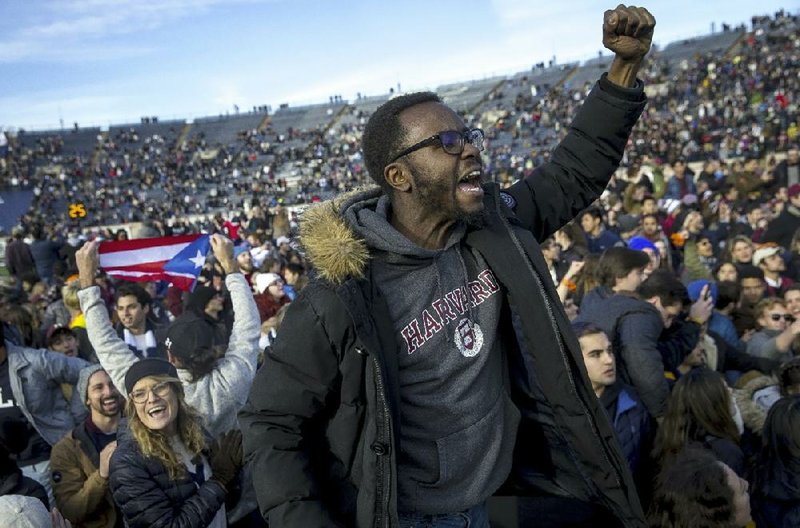 In this November photo, Harvard and Yale students protest during halftime of the NCAA college football game between Harvard and Yale at the Yale Bowl in New Haven, Conn. (The Boston Globe/Nic Antaya)

NEW HAVEN, Conn. -- Students alarmed by climate change are stepping up pressure on universities to pull investments from fossil fuel industries, an effort that is gaining traction at prestigious schools such as Georgetown, Harvard and Yale.

The push that is underway at hundreds of schools began nearly a decade ago, and student activists increasingly have learned from one another's tactics and moved to act amid worsening predictions about the effects of climate change on the planet.

Georgetown University's board of directors announced this month that it will end private investments in coal, oil and gas companies within the next decade, and some faculty at Harvard have called for a similar shift. There have been sit-ins and demonstrations this month at dozens of schools, including Gonzaga University, University of Wisconsin, University of Pittsburgh and Cornell University.

Several dozen schools have stopped investing at least partially in fossil fuels, but there is debate over how much the move slows the effects of climate change or affects the bottom line of companies like Chevron and Exxon Mobil.

Many schools have defended their investments, citing a duty to preserve and grow the income they receive from donations, while touting efforts to use investments as leverage to engage energy companies, find solutions for climate change through research, and make campuses carbon-neutral by not causing any net increases in heat-trapping carbon dioxide.

For student activists, it's about taking a moral and political stand.

At Yale University, which has a $30.3 billion endowment, the Faculty of Arts and Sciences' Senate discussed the university's ethical obligations regarding fossil fuel investments. It became a big issue partly due to a widely covered student protest that disrupted a November football game between Harvard and Yale.

"Yale has to take it seriously. We forced them to take it seriously. The faculty discussions are evidence of that," said Ben Levin, a student leader with the Yale Endowment Justice Coalition. "They're also evidence of the fact that the faculty are incredibly concerned because they don't want to be working for a university that's on the wrong side of the most pressing issue of our time."

Yale says it has supported shareholder resolutions calling for companies to reveal what they're doing to address climate change and asked endowment managers not to invest in companies that fail to take steps to reduce greenhouse gas emissions, but student activists want a clean break.

The campus actions are part of a broader push for insurers, pension funds and governments worldwide to end fossil fuel investments.

Environmentalist and author Bill McKibben, a leader of the movement to stop such investments, said students have played a huge role.

"They've kept it up through two generations of undergraduates. Administrators hoped they'd graduate and that would be the end of the pressure, but instead it keeps building," said McKibben, a scholar in residence at Middlebury College, which last year announced it would divest its $1.1 billion endowment from fossil fuels.

Student government leaders from the Big Ten Conference last month called for their 14 schools to begin divesting from fossil fuels, passing a resolution that cited the conclusion of the U.N.'s Intergovernmental Panel on Climate Change that greenhouse gas emissions are driving climate change.

A challenge for institutions is the prevalence of investments in index funds, which makes it difficult to separate out the roughly 4 percent of energy stocks in such funds, said John Jurewitz, a lecturer in economics at Pomona College. Colleges pulling their investments also probably wouldn't hurt oil companies, which have their own internal cash flows, he said.

"It's mainly a political statement about what the university is willing to invest in," Jurewitz said. "It may be a worthwhile statement if you believe it will help get the ball rolling toward getting some realistic, meaningful policy like a carbon tax or cap and trade, something that will put a price on the carbon in some practical way."

The Independent Petroleum Association of America has pushed back with its own campaign, arguing divestment would cost university endowments millions a year with little impact on carbon emissions.

At Harvard, which has a $40.9 billion endowment, President Lawrence Bacow said he would take a faculty motion to the Harvard Corporation, the university's executive board. In the past, administrators have outlined steps Harvard is taking to address climate change while arguing that ending fossil fuel investments wouldn't have a big effect and that it makes little sense to sever ties with energy companies that heat and light the campus.

Connor Chung, a first-year student and organizer for Fossil Fuel Divest Harvard, said the group hopes the university will reconsider.

"At the end of the day, our goal is environmental justice," he said. "Divestment is our tactic for getting there, but it's not going to work unless we have a broader movement around the country and around the world of students demanding that their institutions end their complicity in the climate crisis."

A group of Harvard students also want to stop investments in prisons and companies that contract with them. They sued Wednesday, arguing the school is violating state law by investing in an industry they describe as "present-day slavery." Harvard officials didn't immediately respond to an email seeking comment on the lawsuit.

At George Washington University, sophomore Izy Carney said a student campaign has taken inspiration from the activism of students elsewhere, including in the University of California system, which announced a plan to end fossil fuel investments in 2019.

After hearing from student activists, George Washington's board of trustees announced a task force this month on managing environmental responsibility. But it did not mention divestment as a possibility.

Carney, a member of Sunrise GW, a student group dedicated to fighting climate change, said they would keep up the pressure.

"Right now, it sounds like profits is what our university is after," Carney said. "We just want to make sure our school is doing everything it can to make sure it is not contributing to the climate crisis."

-- Information for this article was contributed by Alanna Durkin Richer of the Associated Press.