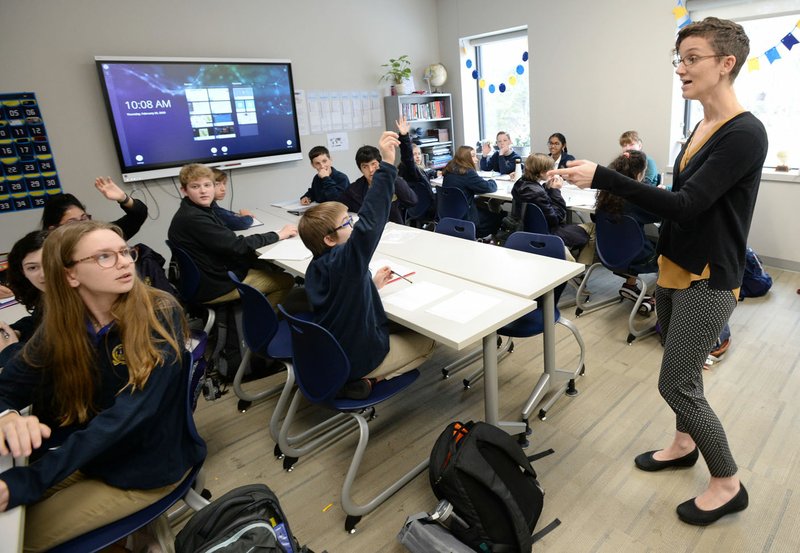 Sarah Kilgus (right) speaks Thursday to her seventh-grade class at Haas Hall Academy in Fayetteville. The state Department of Education last year agreed to work with the charter school to increase diversity among its faculty, staff and student body. Go to nwaonline.com/200222Daily/ for today's photo gallery. (NWA Democrat-Gazette/Andy Shupe)

FAYETTEVILLE -- Haas Hall Academy officials hope results of their admission lottery this week will reflect increased effort over the past year to expand the diversity of their student body.

The lottery is set for 6 p.m. Tuesday at Haas Hall's Fayetteville campus. Haas Hall also operates schools in Bentonville, Rogers and Springdale, all for grades seven through 12.

Here’s how the racial and ethnic diversity of Haas Hall Academy’s students compares to that of Northwest Arkansas’ four largest school districts. Haas Hall has a campus in each of these four districts. Numbers are from Oct. 1.

Northwest Arkansas has five charter schools, including one (Hope Academy) opening this fall, each with a certain number of students it can accommodate. Each school holds an admission lottery around this time of year for the next school year. Here’s how many applicants and openings each charter district had for the 2020-21 school year.

About 970 students have applied for one of the charter school's 481 open seats in the region for the 2020-21 school year, according to Kelly Barnett, director of admissions and communication.

Haas Hall has earned numerous accolades since it launched in 2004. The Fayetteville campus last year landed at No. 7 on the U.S. News & World Report list of the nation's best public high schools.

State Board of Education members, however, for years have expressed concern the demographics of Haas Hall's 1,350 students don't align with the population of surrounding school districts, especially when it comes to English language learners, special education students and those who qualify for free or reduced-price meals.

About 66% of Haas Hall's students are white. The combined student population of the four public school districts in which Haas Hall is located is about 52% white.

Haas Hall's admission is determined through a "blind" lottery that doesn't give more or less weight to applicants based on their race, income, English-language proficiency and special education needs. Those kinds of things aren't known to the school until the enrollment process is complete.

Applications ask only for name, date of birth, contact information and whether the applicant has ever been expelled.

"We accept and embrace all of the recommendations the state has given us," said Mark Henry, an attorney for Haas Hall.

The Equity Assistance Center in November published a Diversity and Inclusion Review, which outlined five recommendations for the school.

One of those recommendations was to develop diversity and inclusion goals based on sufficient data and have well-defined outcomes and a timeframe for measuring progress.

Another recommendation had to do with strategies to increase the diversity of student and staff applicant pools.

The center suggested numerous ideas, including canvassing local neighborhoods to share information about the school, partnering with churches and other groups to share school information and partnering with professional organizations for help identifying people in the workforce who may consider nontraditional routes to teacher licensure.

Brendan Welch, a senior at Haas Hall's Rogers campus, helped his school last month by posting fliers in downtown Rogers businesses and at Veterans Park advertising Haas Hall's admission lottery. The fliers were in both English and Spanish.

Welch, who is non-Hispanic white, said there's a big effort at the school to appreciate different cultures and just about everyone gets along, regardless of their differences.

"We're a family," he said. "I feel like Haas Hall does an incredible job of immersing the different cultures and making everyone feel welcome."

Dyllan Rodriguez, a sophomore at Haas Hall Rogers, is Hispanic. Dyllan, 15, said he's never felt uncomfortable or discriminated against because of his ethnicity. He agreed with Welch's portrayal of the school as a family.

"I would say so, yeah. I mean, we all really care about each other," he said.

State officials also have urged the school to increase the diversity of its staff. Nine of Haas Hall's 87 teachers, or about 10%, as of last fall were classified as something other than white, according to state data. That's roughly equal to the rates among the region's local public school districts.

Dyllan couldn't recall having a Hispanic teacher, either at Haas Hall or his previous school in the Rogers School District. He said his teacher's race or ethnicity doesn't matter much to him, but that may be just because he's used to having all non-Hispanic teachers.

"As long as they're good teachers, that's fine with me," he said. "I think the bonus of having one be Hispanic would be great, but you kind of need a balance. You can aim for a Hispanic teacher, but you want to make sure they can actually teach."

Only one of the 21 teachers at Haas Hall Rogers is a minority, according to state data. That's Brittany Albury, who teaches English and art.

Albury, who is black, moved to Northwest Arkansas two years ago. She taught in a Bentonville school before Haas Hall hired her last summer.

"I'm noticeably the only African-American teacher here, but I don't feel out of place at all. It's been very welcoming. Everybody's been friendly and nice," Albury said.

Amelia Dunavan, Haas Hall's director of special services, said she interviewed about a dozen people for the position. She didn't know Morehead's racial background before she met him in person for an interview. He was chosen based on the quality of his work experience, but diversity was still a factor in the decision, she said.

Martin Schoppmeyer, Haas Hall's founder and superintendent, said he expects the school will be filling five to 10 faculty positions between now and next school year. Schoppmeyer attended a weeklong program in Houston last year to become a certified diversity professional.

Rebecca Luebker, a teacher at the Fayetteville campus, was appointed the school's executive director of culture last fall. The message has been conveyed to Haas Hall's various departments diversity is important when it comes to hiring, she said.

"I think something that's going to be really important, that our educators match the population of our students, so that our scholars have someone they can look to and model after that look like them," Luebker said. "As we increase the diversity of our students, our faculty need to replicate that."

Haas Hall officials are due to appear before the state Board of Education in June to provide an update on their progress toward implementing some of the Equity Assistance Center's recommendations.

"We will be available to them to help implement some of these things, as well as hopefully come up with some other ideas," said Salas-Ford of the Division of Elementary and Secondary Education, addressing the board in November. "As we learn, we want to share that with all of our schools as well."