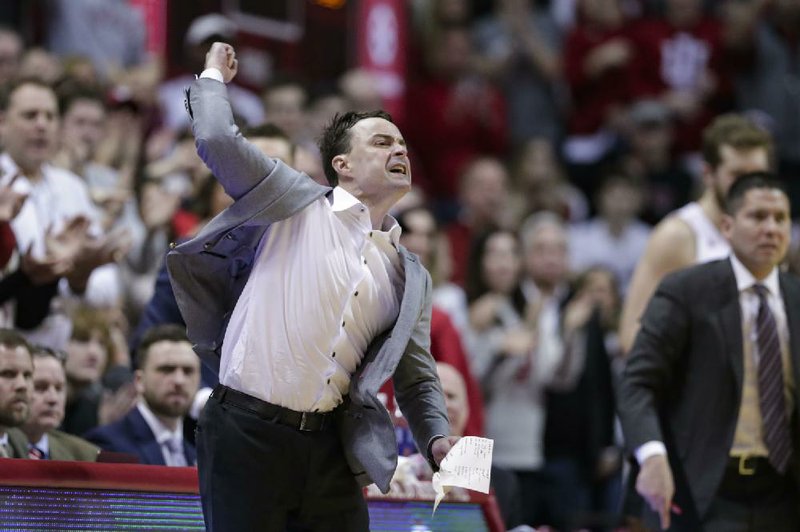 Indiana Coach Archie Miller reacts to a basket in the second half of the Hoosiers’ 68-60 victory over Penn State on Sunday. (AP/Michael Conroy)

BLOOMINGTON, Ind. -- In a game full of wild swings, Indiana boxed out No. 9 Penn State.

The Hoosiers let a 19-point first-half lead completely disappear, fell behind by six and then rallied for a 68-60 victory Sunday.

"We play the game in 10 four-minute battles or rounds like a fight," Indiana Coach Archie Miller said. "There is going to be swings and you have to fight through it and find way to weather it."

"We got off to great start and should have had a bigger lead going into halftime, but we made some dumb errors," Miller said. "We took a huge punch in the second half and times this year that punch has hurt us a lot more. "

Devonte Green contributed 10 points for the Hoosiers, who made their final four free throws to help seal the win.

"At the end of the game, we made almost every single hard hustle play," Miller said. "We were able to make some plays when it was tough. We found a way to finish. For the most part, we played smart. We fought and finished the last two games well defensively."

"Lamar was great but he needs help," Penn State Coach Patrick Chambers said. "When we are successful we are sharing the basketball. We were relying on one guy."

Penn State has been without Myreon Jones, who is averaging 14.1 points, who has missed the last five games with an undisclosed illness.

"You have [to] give them a little bit of a pass when you have a guy that good that is not playing," Miller said. "Hopefully, he comes back because they are having a great year. They always grind you out and play hard."

The Nittany Lions opened the second half with 12 unanswered points to slice Indiana's 13-point halftime lead to 37-36. The Hoosiers' cold streak continued as Penn State took a 48-42 lead with 12:17 left.

"We came out at halftime and punched back," Chambers said, echoing the boxing theme. "That's a tough environment and we competed until the end."

In a game of long scoring droughts by each team, the Hoosiers regained control with a 11-0 run punctuated by a dunk by Jackson-Davis to take a 55-48 lead.

Aaron Wiggins led Maryland (22-5, 12-4) with 20 points and Eric Ayala had 16, but the Terrapins got little help from their big guns. Leading scorer Jalen Smith, who averages 17.1 points per game, was held to eight. Anthony Cowan, who averages 16.9, scored 10 before fouling out.

OMAHA, Neb. -- Marcus Zegarowski made all seven of his three-pointers and finished with 25 points, and Creighton beat Butler for its fourth consecutive win over an AP Top 25 opponent.

The Bluejays (22-6, 11-4 Big East) have won nine of 10 and remain one game behind conference-leading Seton Hall.

Butler (19-9, 7-8), which dropped its third consecutive game, played the second half without season scoring leader Kamar Baldwin. He limped off the court late in the first half with an injury to his left ankle.

Christian Bishop had a career-high 19 points to go with seven rebounds and five assists.