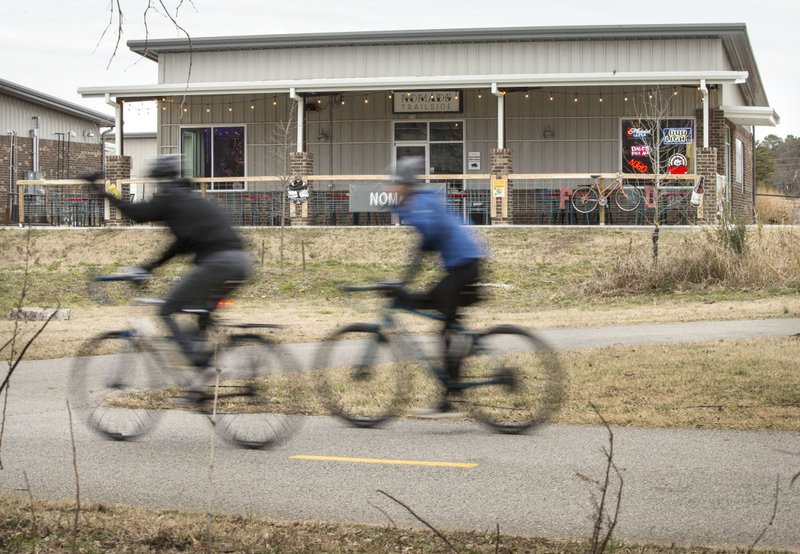 Cyclists ride past Nomads Trailside on Saturday on the Razorback Greenway in Fayetteville. Go to nwaonline.com/photos to see more photos. (NWA Democrat-Gazette/Ben Goff)

FAYETTEVILLE -- City leaders want to hone in on the economic potential of trails.

About 47 miles of paved trails weave through the city, and another 26 miles are planned over the next five years.

The city has had a plan for trails since 2003. However, the plan identifies trail locations, not what should be developed near them. Any trailside businesses have emerged organically, said Jonathan Curth, the city's development review manager.

Homes built near trails have been happenstance rather than part of the design, he said.

"I don't think there's anything wrong with it being done organically," he said. "Speaking for myself, and speaking from what I understand from council members, it certainly seems like there's an appetite to see more, and to make it easier."

The City Council asked planners to include trailside development as part of the 2040 plan adopted last month. The plan recommends a three-pronged approach.

Some measures could be simple, Curth said. For instance, adding "or trails" to the sentence in a zoning code saying buildings should face the street. Other aspects would take more thought such as what types of businesses or homes should be allowed along trails or where development would be inappropriate because of topography, environmental or neighborhood concerns, he said.

"I think it'd be pretty much uncharted waters," Curth said. 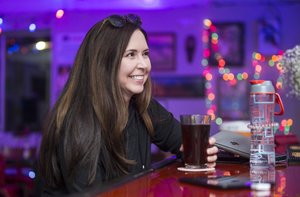 Melissa Pinter of Fayetteville has a beer Saturday at Nomads Tailside in Fayetteville. Go to nwaonline.com/photos to see more photos. (NWA Democrat-Gazette/Ben Goff)

Nomads Trailside opened near Scull Creek Trail south of Poplar Street in May to complement its original location on the south side of town. Taking advantage of the bicycle and pedestrian traffic intrigued them, and the business partners found a perfect building, said Jason Kindall, co-owner.

"We knew the patio and what kind of potential it had," he said. "It's right on the trail and the creek."

Setting up shop alongside a trail has a distinctly different vibe from a restaurant along a major street, Kindall said. That's most apparent on nice weather days, he said.

There's ample seating inside and a small stage for when the weather refuses to cooperate. The concept has been a success, Kindall said.

"We've kind of developed our own clientele up here," he said. "It's developing its own atmosphere and its own vibe."

Not every business near a trail is a restaurant or bar.

Stephani Jungmeyer, owner of Trailside Yoga on West Center Street, said being next to a trail helps promote the healthy lifestyle her studio embraces. It also helps foster a sense of community, she said.

A significant portion of the studio's clients walk, run or bicycle from their homes, Jungmeyer said. Some passersby will pop their heads in, see what's going on and then end up making regular appearances, she said.

It's a lot easier for pedestrians or bicycles on the trail to turn and see the studio than it is for drivers making their way down the hilly street, Jungmeyer said. The business has seen the benefit of trailside traffic, she said.

The studio lies within downtown, which has several places to eat or hang out connected by trails. People tend to go with each other to other places after classes, Jungmeyer said. 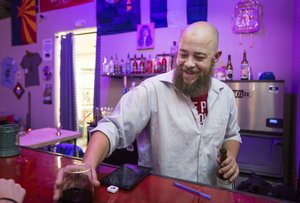 "A lot of friendships have been formed," she said.

Tim Robinson, Bentonville City Council member and co-owner of multiple Phat Tire bike shops, including ones in Bentonville, Rogers, Springdale and Fayetteville, said being located alongside or near a trail helps with his particular type of business. People wanting to buy a bike can do test rides safely on the trail, as opposed to a parking lot or street, he said.

However, other types of businesses can find success trailside, too. Group riders love having a destination, Robinson said. Riders who exert themselves look for that beer they earned after a ride, he said.

The more a city puts money and thought into trails and what's near them, the more an ecosystem is created, Robinson said. Trailside developments can feed off one another with more bicycle and pedestrian traffic, he said.

Bicycling as a replacement for driving cars is growing in the region, Robinson said. The advent of electric-assist bikes is attracting people who otherwise might not ride, he said. Plus, schools have bike leagues students can join like any other sport, instilling active living at a young age, Robinson said.

"You'll continue to see more and more of it," he said.

Cities are getting smarter about how they leverage the potential of trails, said Kelly Pack, senior director of trail development at the Rails to Trails Conservancy, a Washington-based nonprofit group, which works with cities to build trail corridors.

A trail movement has taken over in the past decade, Pack said. As cities consider the best connections for their networks, they've become intentional about how to attract people to those trails, she said. People tend to use them more when destinations sit along the way.

The obvious benefit of sales tax or property tax revenue occurs when businesses and homes go up near trails, Pack said. Indirect economic benefits also are associated with creating an ecosystem of trails and amenities, she said.

According to a 2016 report from the Urban Land Institute, trail-oriented developments have grown along with trail networks. Trail developments bolster a local economy in a number of ways, the report states.

Redevelopment along trails boosts property value, according to the report. Trail developments help attract a workforce, and the trails help keep workers healthy. Businesses visible from a trail tend to get regular customers who spend more than customers who arrive by car, the report states. Plus, customers arriving by bicycle or walking take up fewer parking spaces. 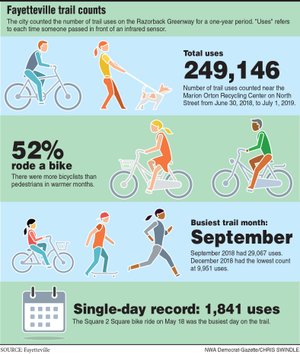 Robust trail networks and developments also serve as a tourism draw. More people ride bikes than play golf or ski, according to the report. Small-group bike touring is growing. Destinations heavy with trails tend to have less car traffic, resulting in a better experience, the report states.

Having a plan for trailside development in place, rather than taking a piecemeal approach, maximizes those benefits for cities, Pack said.

Any development, whether it's commercial or residential, wants to be oriented toward people, said Devin Howland, the city's economic vitality director. Downtown property faces the sidewalk. Businesses along College Avenue face the highway. The same idea applies to trailside development, he said.

A number of businesses have had success near trails, so it's an indicator there's a demand out there, Howland said. City officials would like to help usher the supply, he said.

"If we could do something to promote it more, and not stand in the way, where it's easier, I think it's something we should really do," Howland said.

• As part of the trailside development plan, gauge the feasibility of creating this plan with resources or through an external consultant. Engage the public, assess land use and zoning adjacent to trails and evaluate existing ordinances.