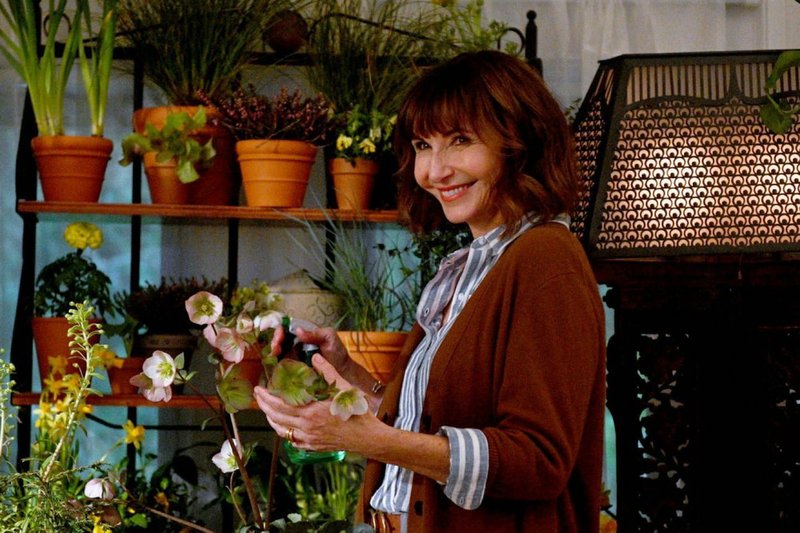 Mary Steenburgen plays Maggie Clarke on NBC's Zoey's Extraordinary Playlist, a role for which she has to sing and dance. That challenge was a big draw for the Arkansas-born actress. (NBC/Sergei Bachlakov)

Just over a decade ago, Mary Steenburgen awoke from minor arm surgery and began to hear music -- everywhere. Every street sign she read, every sentence she heard got swept up into what she refers to as a "musical tornado." Words and melodies swirled around in her head. She was terrified.

"The best way I can describe it is that you have your idea of what it sounds like to be you, to have your mind be what it is," the Oscar-winning actress said. "And all of a sudden, it doesn't sound like that anymore. It made concentrating on anything very difficult."

Steenburgen needed a way to return to normalcy and eventually found it by channeling her new reality into songwriting. But starting out as a beginner at 54 years old was "really sometimes hard on the ego," she said. It took gumption and an honest sense of self for her to get to where she is now: "I never tried to pass myself off as being more accomplished at it than I was," she added.

Having successfully "apprenticed" at songwriting -- perhaps an understatement, given that one of her compositions landed on this year's Oscars shortlist for best original song -- Steenburgen is ready to take on another challenge. The actress, now 67, stars in the NBC sitcom Zoey's Extraordinary Playlist, which required her to add singing and dancing to her repertoire. The series, which airs Sundays at 8 p.m., tells a story oddly similar to her own: After getting an MRI scan, computer coder Zoey Clarke (Jane Levy) discovers she can hear people's inner thoughts through songs, which she then imagines them performing.

Steenburgen plays Zoey's mother, Maggie, a grounding force in a show whose premise often lends itself to levity. Maggie's husband, Mitch (Peter Gallagher), is based on series creator Austin Winsberg's own father and suffers from a rare neurological condition that has rendered him unable to speak or move. Steenburgen's mother died of a similar condition, and Steenburgen said she took on the role in part to "honor both the people who have lost their lives to a disease like this but also their caregivers and the people who had to structure a life to support them."

She added, "It was emotionally one of the hardest things I've ever done, for many reasons. One is that after six months of working with Peter, and with him just being so brilliant in this role, it felt very real and hard to deal with. The other was that my husband and I are not young, so these things land harder."

Steenburgen also took on the role for the chance to work with Emmy-winning choreographer Mandy Moore, whom she deemed "a genius." The actress admitted her musical ability did not naturally extend past songwriting to singing and dancing, yet she is seen doing both as early as the second episode (in which the Van Morrison song "Moondance" plays a pivotal role).

"I just like taking risks," she said of the show. "It was this opportunity to incorporate music into the job I've had for 45 years and loved for 45 years ... I can't imagine having said no to it."

Taking risks has done Steenburgen well. While her Oscar-shortlisted power ballad "Glasgow (No Place Like Home)" did not make the final list of nominations, the film itself -- Tom Harper's Wild Rose, about an aspiring country music singer from Scotland -- was recognized at the British Academy Film Awards ceremony earlier this month. Best actress nominee Jessie Buckley performed "Glasgow" at London's Royal Albert Hall -- unbeknown to the songwriter, who once lived near the venue.

"If you told me that someday a song of [mine] would be sung there, I wouldn't have even known what to think about that," said Steenburgen, who added it is "such a wonder to me still" that the song tied with Elton John and Bernie Taupin's "(I'm Gonna) Love Me Again" at the Critics' Choice Awards.

Steenburgen credits much of her success in music to the support she received from people she met in Nashville, Tenn., like "Glasgow" co-writers Caitlin Smith and Kate York. In working with them, and in writing for Universal Music Group and Warner Chappell, Steenburgen formed the belief that music was always a part of her, just one she did not previously have access to.

There comes a point in life when people stop telling you to try new things, she said. And while her experience was initially more frightening than she wishes it had been, she remains grateful for how it has encouraged her to step out of her comfort zone. Music has become such an essential part of Steenburgen's life that on The Good Place, the recently concluded NBC sitcom starring her husband, actor Ted Danson, she played a cameo role as a guitar teacher.