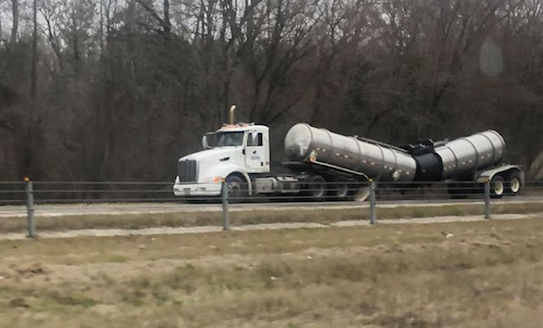 All lanes of U.S. 67 in both directions have been reopened after a sulfuric acid spill Tuesday morning, Transportation Department spokeswoman Krista Sides said.

She said the road has been deemed safe for all travel.

Jacob Harper, spokesman for the Arkansas Department of Energy and Environment, said the department emergency response personnel found "minimal impact" from the acid to about a quarter of a mile of roadway, the shoulder and some standing water on the side of the road. He said the department did not observe any impact to a nearby waterway.

Southbound lanes of U.S. 67 in Lonoke County remained blocked Tuesday morning after a crash between a tanker and a passenger vehicle spilled roughly 2,600 gallons of sulfuric acid onto the highway.

State police spokesman Bill Sadler said the wreck occurred around 6:15 a.m. The tanker was carrying diluted sulfuric acid, which began to leak onto the road, he said.

Sadler said no injuries from the wreck have been reported, and the cause of the crash is not yet known.

Traffic in both directions on the highway was stopped for a time, but northbound lanes were reopened by 8:40 a.m., according to the Arkansas Department of Transportation.

All southbound lanes remained blocked near Austin at 10:30 a.m., with traffic being diverted at the Beebe-Conway exit.

Transportation Department spokeswoman Krista Sides said a remediation company is handling the acid cleanup. Sides estimated the effort would be finished around noon.

Once the spill has been cleaned, officials will need to determine whether the road will need repairs before being reopened, according to the spokeswoman. Sides said the Arkansas Department of Environmental Quality was at the scene as well.

This story was originally published at 7:32 a.m.