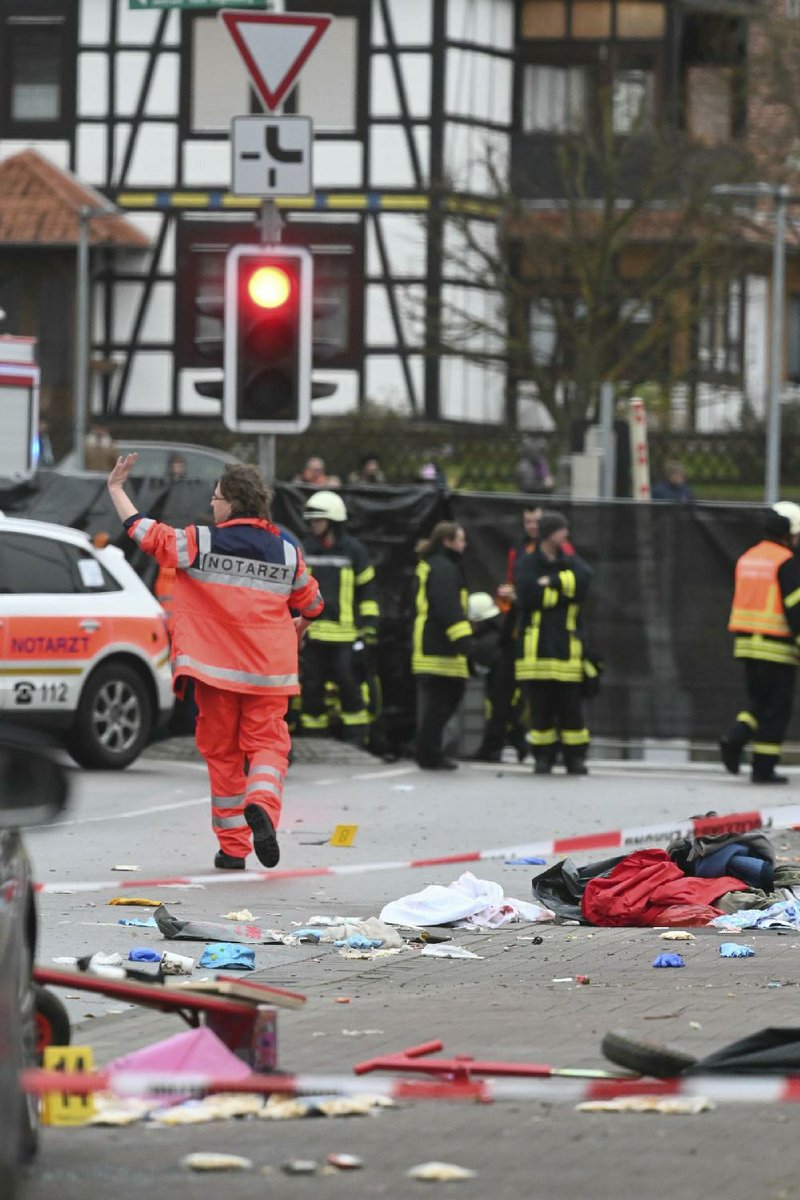 Police and rescue crews work Monday at the place where a car crashed into a carnival parade in Volkmarsen, Germany. (AP/dpi/Uwe Zucchi)

BERLIN -- Thirty-five people, around half of whom are children, remained hospitalized Tuesday, a day after a man drove a car into a crowd celebrating Carnival in central Germany. Police continued to look for a motive for his action, which they believe was deliberate.

North Hesse state police said 18 children were among the injured. In addition to those people kept in hospitals overnight, a further 17 were treated and sent home after the Monday afternoon incident in the town of Volkmarsen.

The driver, a 29-year-old German man from the area, also was in the hospital with serious head injuries, police spokesman Henning Hinn said.

Police haven't been able to interview the suspect yet because of his condition.

The crash in Volkmarsen, a town of about 7,000 near Kassel, about 175 miles southwest of Berlin, occurred at the height of Germany's celebration of Carnival.

Erdogan's remarks followed reports that as many as 16 Turkish soldiers may have been killed in the fighting in Libya since last April, reports that the Turkish leader did not address.

Turkey, which backs the U.N.-supported Libyan government that is based in Tripoli, has sent Turkish military trainers as well as Syrian fighters to battle against rival Libyan forces under commander Khalifa Hifter, who in April opened an offensive to capture Libya's capital.

Erdogan had said on Saturday that a "few" Turkish soldiers have been killed in Libya but did not say how many.

The head of mobilization for Hifter's forces, Khaled al-Mahjoub, had claimed that militia fighters killed at least 16 Turkish soldiers who were taking part in battles in and around Tripoli since April.

Hifter's forces also said that a Turkish military officer, an intelligence officer and their Syrian interpreter were killed in artillery shelling that targeted a ship that was about to unload weapons at the Tripoli port earlier in February.

JOHANNESBURG -- A new report reveals that dozens of HIV-positive women were forced or coerced into sterilization after giving birth at public hospitals in South Africa.

The Commission for Gender Equality's report this week said it investigated complaints by at least 48 women of "cruel, torturous or inhumane and degrading treatment" at the hospitals. At times, it occurred when women were in labor, the report said.

In many cases, "the hospitals' staff had threatened not to assist them in giving birth" if they didn't sign the consent forms for sterilization, the report says. The commission is a statutory body that operates as an independent watchdog.

The forced sterilizations at 15 public hospitals in South Africa between 2002 and 2005 have sparked public anger.

"When I asked the nurse what the forms were for, the nurse responded by saying: 'You HIV people don't ask questions when you make babies. Why are you asking questions now? You must be closed up because you HIV people like making babies and it just annoys us," the report quotes one complainant as saying.

The commission said that its investigation took time because of challenges including some hospital staff members who tried to hide documents or refused to cooperate.

In the 150-seat parliament, 96 of the 113 lawmakers present voted to reject the ratification of the treaty known as the Istanbul Convention.

The document was adopted by the Council of Europe in 2011 in a bid to fight violence against women throughout Europe.

The rejection was proposed by the ultranationalist Slovak National Party, a member of the ruling coalition with support of the senior ruling party, the leftist Smer-Social Democracy.

Their lawmakers also called on President Zuzana Caputova to inform the Council of Europe that Slovakia will stay out of the treaty.

The opposition far-right People's Party Our Slovakia also voted against it.

Opponents of the convention in Slovakia, which is predominantly Roman Catholic, claim that some provisions would violate the Slovak Constitution -- for example because the constitution defines marriage as a union of a man and a woman.